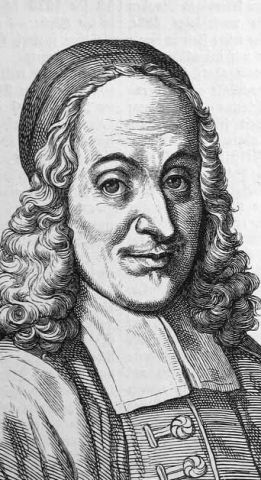 Today in 1635, the Lutheran pastor who came to be known as Father of Pietism was born.

Spener’s reputation and influence are all bound up in his most important book, the brief and readable Pia Desideria, which has one of those classic 17th-century sub-titles that are fully explanatory and nearly as long as a chapter:

or, Heartfelt Desire for a God-pleasing Reform of the true Evangelical Church, Together with Several Simple Christian Proposals Looking Toward that End

Spener changed lives and lit fires because he was so clear about what he wanted. After considerable preliminary matter such as a prayer of dedication and a survey of what’s wrong with the state of Christianity, Spener offered his six proposals for improving conditions in the church. The first is the most important:

1. “Thought should be given to a more extensive use of the Word of God among us.” Since there is no good in us, we have to make use of the powerful means that God has provided for bringing about good. “The more at home the Word of God is among us, the more we shall bring about faith and its fruits.”

As a pastor, Spener preached regularly, but his point is that regular preaching by the ordained clergy is just not enough contact with the Bible. It would take years and years for a Christian to build up serious knowledge of the contents of Scripture, if the sermon is the only delivery system. Spener recommended three further steps:

a. The Bible ought to be read diligently in households, by the head of the family or whoever is literate.
b. Entire books of the Bible ought to be read aloud for groups, one after another, as part of the public church service, without further comment.
c. Church meetings should sometimes be held in which each church member who had been blessed with insight or wisdom would share what they understood. This could happen in small groups, led by a minister, and open to discussion among all participants.

2. The spiritual priesthood of all believers must be affirmed, taught, and put into practice. There is a legitimate distinction between ordained clergy who have special training on the one hand, and church members whose expertise is in some secular calling on the other. But “all spiritual functions are open to all Christians without exception. Although the regular and public performance of them is entrusted to ministers appointed for this purpose, the functions may be performed by others in case of emergency. Especially should those things which are unrelated to public acts be done continually by all at home and in everyday life”

3. “It is by no means enough to have knowledge of the Christian faith, for Christianity consists rather of practice.” Spener feared a faith that just flits around in the head. He was, after all, the father of Pietism: heartfelt Christianity that expresses itself in love.

4. We must be careful how we engage in theological controversy. Disputation is frequently necessary, and only a naive church would imagine otherwise. But the spiritual dangers connected with doctrinal fighting were abundantly evident in Spener’s day.

5. Ministers must be trained properly, with deep knowledge of the Word and also with constant commitment to own spiritual development. Professors ought to set good examples, and “it would be especially helpful if the professors would pay attention to the life as well as the studies of the students entrusted to them and would from time to time speak of those who need to be spoken to.”

6. Good sermons ought to be preached. Really good sermons. As his chief example of good sermons, Spener points to the preaching of Johann Arndt (Pia Desideria was originally written as a preface for a collection of Arndt sermons).

Some of these recommendations have become commonplace now, especially for those of us who are downstream from Spener’s influence. But some of them describe a better situation than we are currently in. The church scene of the 21st century surely needs what Spener recommended in the Pia Desideria.