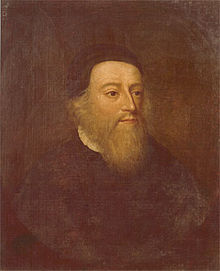 Bernard Gilpin (1517-1583) was a English priest and theologian all through those years when it was hard to keep from being burned at the stake no matter what your theological views were. A man of peace born into a time of war, he had to engage in controversy and put his life on the line, but somehow he managed to give to his entire life the shape of good doctrine, good works, evangelism, and pastoral care. He didn’t quite manage to live his Christian life as if nothing turbulent were going on, but he came as close as anybody could without taking recourse to cowardice. And he died at home in peace, to boot!

As a student at Oxford, he argued the conservative Roman Catholic line against the new Protestantizing ideas of John Hooper. Though he felt confident that he had defeated the arguments of Hooper, his defenses buckled shortly thereafter when he had to face the much more substantial arguments of Peter Martyr Vermigli in public debate. Gilpin lost the argument in public, and he knew it, even though everybody on his side claimed he won (that’s how public debates work, of course: both sides think they win).

Gilpin was deeply troubled by Vermigli’s arguments, and they set him searching into his theological commitments. Gilpin’s thought is nuanced and hard to categorize, but the short version of the story is that he came out some kind of Protestant:

All these things, and many more, gave me occasion to search both the Scriptures and ancient fathers, whereby I began to see many great abuses, and some enormities, used and maintained in popery, and to like well of sundry reformations on the other side.

Afterwards, in three years’ space, I saw so much gross idolatry at Paris, Antwerp, and other places, that made me to dislike more and more the popish doctrines; especially because the learned men disallowed image-worship in their schools, and suffered it so grossly in their churches.

As I could with small knowledge, I examined the mass: the greatest fault I then found was too much reverence and gross worshipping of the gaping people, because I believed not transubstantiation. Likewise my conscience was grieved at the receiving of the priest alone. Yet at length I said mass a few times as closely as I could.

I reasoned with certain that were learned of my acquaintance, why there was no reformation of these gross enormities about images, reliques, pilgrimages, buying mass and trentals, with many other things, which in King Edward’s time the Catholics (so called) did not only grant to be far amiss, but also promised that the church should be reformed, if ever the authority came into their hands again. When I asked when this reformation was to begin, in hope whereof I was the more willing to return from Paris, I was answered, “We may not grant to the ignorant people that any of these things hath been amiss: if we do, they will straight infer other things may be amiss as well as these, and still go further and further.” This grieved me, and made me seek for quietness in God’s word: no where else I could find any stay.

As he began preaching reform, he was charged with insubordination and summoned to a trial of his views. He was lucky enough to break his leg on the way to the trial, and while he was convalescing the trial was delayed, Queen Mary died, and the whole thing was called off. When the Protestants came back into power, Gilpin fared much better, but he refused to take much advantage of the reversal of fortunes, and was never quite reconciled to the Elizabethan settlement itself.

The remainder of his life was an odd combination of comfortable luxury (plenty of books, ministering from living quarters richer than a bishop’s, and famous for the generosity of his table hospitality) and ascetic self-denial (riding through winter weather to preach and distribute alms throughout Northumberland, he earned the nickname “The Apostle of the North”).