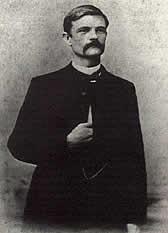 Christian History magazine reports an unusual event in American religious history on this date: Evangelist Sam Jones took his crusade to Toledo, Ohio, with the permission of the Mayor of Toledo: another Sam Jones. How odd. Sam (evangelist) Jones scolded Toledo by saying that if the Devil were mayor of the town, he wouldn’t change a thing.

You don’t hear much about Sam Jones (1847-1906) these days, but he was the biggest name in evangelism between Dwight Moody and Billy Sunday. His trademark style was a direct, folksy, confrontational preaching style. You might call it Will Rogers with a hellfire twist, but apparently that would be tracing influence in the wrong direction: Will Rogers probably got some of his style from Sam Jones. Jones berated his audience with ostentatious bluntness, and preached moral and civic reform with fierce energy. He had an incisive message about grace and forgiveness, but the emphasis of his preaching seemed to be “Right is Right and Wrong is Wrong. Do Right.”

Jones’ signature message was “Quit Your Meanness,” which is pretty good advice (if not quite good news). He is sometimes credited as the origin of the phrase “The road to hell is paved with good intentions.” He isn’t the source, but the fact that people could ever think so tells you a lot about his way with words. Here’s a belligerently anti-intellectual zinger he invented: “I always did despise theology and botany, but I do love religion and flowers.”

Jones is best taken in small doses. So here are small doses: a few pages of Sam Jones’ sayings, culled from something entitled Sam Jones’ Own Book.

“When you arouse the conscience, amid its ferocious lashings, the only alternative left is a better life or complete abandonment. Very few men will choose the latter.” p. 24

“Always hunt better company than you are, for when some of us get up to ourselves we are with the biggest rascal in town right then.” p. 73

“Going to Church is like going shopping: you generally get what you go for –no more and no less. A woman will go into a store with a hundred thousand dollars’ worth of goods all around her, buy a paper of pins, and walk out; that is all she came for. I have seen the store-house of God’s grace packed from cellar to ceiling, and I have seen men go in and gather up an expression of the preacher and go home.” p. 78

“He has either a mighty long head or a mighty short creed who believes only what he understands.” p. 110

“Many a fellow is praying for rain with his tub the wrong side up.” p. 110

“Another says, ‘I’ll tell you what I am waiting for; I’m waiting for the Church of God to get right.’ Yes, and you’ll be in hell a thousand years before that thing ever happens.” p. 123

“Hypocrites ain’t in my way. I have put them all behind me. Nothing can be in my way unless it’s ahead of me. I’ll tell you, whenever you hear a man talking about hypocrites being in his way, it’s because he’s in the rear of the hypocrites, and that’s mighty low ground, isn’t it?” p. 124

“I don’t believe good works ever took any body to heaven, but, brother, I can’t see how I can get there without them.” p. 136

“O, brother, that heart that beats in your bosom is but a muffled drum beating your funeral dirge to the tomb, and you know not when that heart will stop beating.” p. 163

“Sow whisky, reap drunkards; sow cards, reap gamblers; sow profanity, and reap a debauched race. … Sow parties and reap balls; sow balls and reap germans; sow germans and reap spider-legged dudes; and sow a spider-legged dude and reap a thimbleful of calves’-foot jelly.” p. 250 (note: I do not know what this means, but it has a kind of perfect poetry about it. Feel free to decipher it in context)

“You are not only wicked and mean, but you have got no originality about you. I have often wondered why sinners in this country didn’t get up something new. They always quarrel with us preachers about originality. We have got nothing new, they say. I wish you would rack out a few new views on your side. Have you got any? I will tell you what, if you will just turn your opinions around on the back track, and put the dogs after them, the dogs will tree them in hell. That is right where they come from. I will tell you another thing. They are going back there some of these days, and they are going to take you with them if you don’t learn. That is their business up here –to go for your sort and take you back to perdition with them. ” p. 281

“The difference between a backsliding Methodist and a lukewarm Cumberland is this: The Methodist knows he has lost his religion, and the Cumberland, since he can’t lose his, knows he never had any to lose.” p. 346

“It takes less sense to criticise than to do any thing else. There are a great many critics in the asylum.” p. 374

“An unhappy, sad Christianity! I don’t blame young people for not catching on to religion of that sort. As the boys say: You will never get up a ‘mash’ with the young folks on that line. Never!” p. 412

“Our Christianity is too slow. Half of us never get up with an old sinner until he is dying, or dead drunk, or too sick to move. Then we catch up with him. Nine out of ten of these nineteenth century sinners can run a mile while we are fastening ourselves. I have known a preacher who did n’t expect to do any thing but worry the living and bury the dead. And that’s about all he did do. As soon as an old sinner got down to die, he ‘d go and cry over him and talk about the Christian life, and at last perhaps he’d get him to give to God the last remnants of a miserable life. Brethren, have an aggressive, earnest, cheerful Christianity, full of life. Christianity is life or it’s nothing. Life! Life!” p. 418

“There are few men in this world better than their wives.” p. 436

“Organized charity is the only real charity in the world –that charity that thinks of and thinks into the cases, and thinks out the difficulties of those who need help, and puts them where they can assist themselves.” p. 500