Archbishop James Ussher, Bishop of Armagh, is remembered these days chiefly for his chronology: Annales veteris testamenti, a prima mundi origine deducti (“Annals of the Old Testament, deduced from the first origins of the world”), which he published in 1650.

What was his chronology? The short version is that he added together all the begats of the Old Testament and came up with an earth origin in the year 4004 BC. In October. On the night before Sunday, October 23.

Ussher excelled all previous attempts mainly by his precision and his encyclopedic learning: he correlated Biblical accounts with classical and Middle Eastern history, and with Jewish calendar systems. 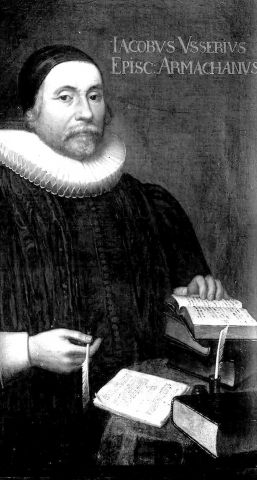 He made independent judgments about the superiority of the Hebrew text to the Greek translation of the Old Testament, about reconciling the Julian calendar to the Gregorian, and about anything else that got in his way. All in Latin, all festooned with quotations from classical authors. The sheer erudition of Ussher’s work convinced many people, and his dates made it into the margins and headers of a series of influential Bibles, from eighteenth-century editions of the King James Bible down to Scofield’s Reference Bible.

Ussher’s chronology is famous now because of controversies of our own time: His Annals are back in print because of young-earth creationist demand, and his dating of creation has been ridiculed in public discourse since Inherit the Wind.

The leading controversy of Ussher’s own times was on another subject: Was Irish Christianity before the sixteenth century more Roman Catholic, or more Protestant? Protestant, said the “Lord Archbishop of Armagh, and Primate of All Ireland.” But true to his thorough, bookish ways, he prepared a long Discourse on the Religion Anciently Professed by the Irish and British, in which he cited primary text on all the topics at issue between Catholics and Protestants. In doing so, he decried the practices of proof-texting and special pleading that often dominated such historical arguments. Ussher did his best to present all the evidence, even when it tended against his own theological convictions, as he had to admit that it did on the question of whether ancient Irish Christians had engaged in prayers for the dead. “My intention herein being to deal fairly, and not to desire the concealing of any thing, that may tend to the true discovery of the state of former times; whether it may seem to make for me, or against me.”

As to his own doctrinal convictions, Ussher was clear and direct. He wrote several doctrinal works, including a catechism. But the best thing to read for Ussher’s theology is probably his 18 Oxford sermons from 1640. In these, he sets forth the doctrine of justification, which he calls “the Mother-Grace,” and then the many “daughters or hand-maids of this grace,” such as peace with God, access to the throne of grace, and joyful hope.