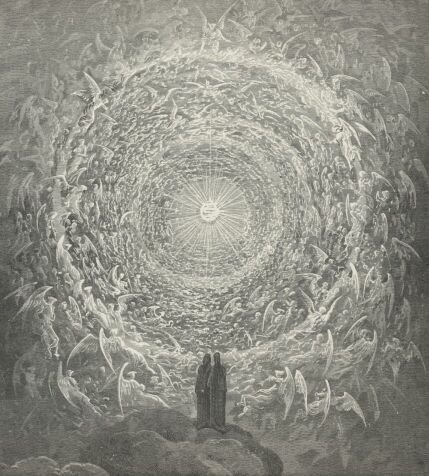 On January 29, 1336, Pope Benedict XII issued a letter which made official pronouncements on a controversy that had been raging for several decades. The letter was Benedictus Deus, and it sorted out the following problem:

When people die, their souls leave their bodies. That’s their personal eschatology, their own endings. But the world goes on until Christ returns as judge, which will be cosmic eschatology, the world’s ending, at which time people will be sent to heaven or hell. But what goes on in the meantime? Do disembodied souls go straight to heaven or hell upon their death, or do they wait around… somewhere… in a disembodied state? Specifically, if believers die, are they able to behold God, see the beatific vision, without having bodies? A lot of medieval theologians wanted to say no: God’s plan for glorified humans is for them to be glorified as embodied souls, as body-and-soul complexes. So they can’t be fully in God’s presence in the interim period when they are disembodied. But this led to the problem of figuring out where these poor souls went and what they did while they waited for judgment day. For the saved souls, their strong desire to be embodied and to be gazing on the presence of God would constitute a kind of yearning that would surely border on torment, like having an itch but no fingernails to scratch with. Where is grandma right now? Either in God’s presence but lacking the body that she is supposed to have in order to enjoy that presence, or waiting for her resurrection body and not necessarily liking it.

Benedict XII declared that souls that still need purifying had better hustle off to purgatory, but as for the purified souls: they

have been, are and will be with Christ in heaven, in the heavenly kingdom and paradise, joined to the company of the holy angels. Since the passion and death of the Lord Jesus Christ, these souls have seen and see the divine essense with an intuitive vision and even face to face, without the mediation of any creature by way of object of vision; rather the divine essence immediately manifests itself to them, plainly, clearly and openly, and in this vision they enjoy the divine essence .

Benedict was trying to strike a balance with this proclamation: On the one hand, souls go directly to the presence of God. On the other hand, it will apparently be even better when they are re-embodied and seeing the beatific vision with the eyes of their physical bodies.

It all sounds like more than we could know, and even frightfully mythological. But this is what people used to expect theologians to talk about, and I for one find it more interesting than whatever people expect theologians to talk about now. And anyway, what do most people think about heaven these days? They think that there’s no such thing as a soul that is distinct enough from its body to sustain its life and intelligence in a dismebodied way, and they simultaneously believe that inescapable trope of our era, that our departed loved ones are smiling down on us from a better place, approving of what they see.

I prefer Benedict’s argument about whether it takes physical eyeballs to see all of God’s glory that he intends to show us when all is said and done.