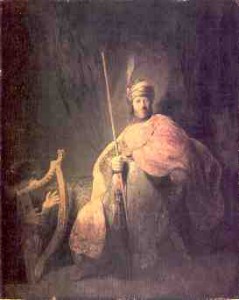 Reading the story of Israel’s first king this week, it occurred to me that this story in 1 Samuel has all the makings of a classic tragedy: his early promise, his fatal flaws, his downfall, the lament sung over him by David his successor. It’s got the epic sweep of salvation history, the dark mystery of divine election and rejection, and a trip to the underworld to hear the voices of the dead. Man, this story has everything!

Well, it must be a good idea, because it turns out that just about everybody else has had it, too.

Never mind that Rembrandt painted scenes from it. Never mind that Handel wrote an opera on it, which I should have remembered. Never mind that Orson Welles played the role in a David movie, or that poets as certifiably great as Robert Browning and Lord Byron have tried their hands at the story. And never mind that Shakespeare worked bits of the Saul story into Macbeth, though the ideas went through his Elizabethan blender.

No, it’s not the great names that cow me. What’s daunting is the stream of authors I’ve never heard of, who have taken up the story of Saul and told it in verse or epic form:

Wow, somebody should write an article about this stuff. Oh wait, somebody has. Oh, and there are more articles and probably even dissertations where those came from.

Okay then, it’s settled. The story of Saul has been interpreted as a capital-T Tragedy.