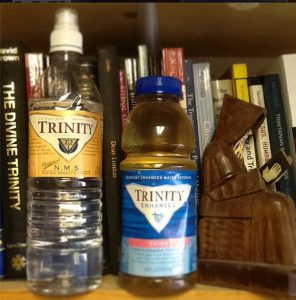 Sometimes the doctrine of the Trinity is presented as if it is the solution to the problems that would surface in mere (unipersonal) monotheism.

A merely unipersonal deity, it is said, could not be love, and therefore only on the grounds of Trinitarian revelation could the message that God is love be proclaimed. Or a merely unipersonal God could not really respond to a covenant partner, but the tripersonal God of the New Testament makes it known that something like a covenant is always already present in his being. Or a unitarian God whose chief end was self-glorification would be selfish, but a the concept of a trinitarian God solves this problem by making the glorification of each divine person the chief end of each other divine person. Or “one alone cannot be excellent” (Edwards), but three together display the ratios and proportions of ordered mutual consent. Or a non-Trinitarian God would be lonely, but God the Trinity is not. Et cetera. You get the idea.

I think there’s a lot of insight to be had in all the categories rehearsed in those examples. In another context I might wax enthusiastic about one or the other of them. But if you gloss over the content and just focus on the form of those examples, you’ll see they all have this basic structure: Monotheism of a non-trinitarian type has a problem, and monotheism of the Trinitarian type solves it.

I wonder whether this is the best way to frame things. I’m beginning to think it’s not. I hope you can tell I’m thinking in a tentative and exploratory way about this, and so I’m writing it out blogwise and gestural to test it out a little.

That’s about as far as I want to go in the negative direction, and it’s probably more than enough to stir the pot. I’m much more interested in giving a positive account of the one and triune God.

I think the right way to speak about this is to present the doctrine of the Trinity not as the solution or correction of a doctrine about the one God, but to present it as an intensification, enrichment, or deepening (approfondissement if it helps to deploy a technical-sounding term) of what we have said about the one God.

So in any of the examples I provided at the start of this post, it would be good to frame them not as corrections and replacements of the merely monotheistic statements, but as intensifications that make deeper sense of what already made sense. The triunity of God opens up vistas in which God’s love, beauty, unselfishness, and intimate responsiveness to a covenant partner, already discerned before triunity was revealed, shine forth more compellingly and ravishingly.

There is a sub-set of issues I’m interested in thinking more about, and that is those statements about God that involve reflexivity, repetition, or self-referentiality: God loves himself, knows himself, is consistent with himself, gives himself, reveals himself, etc. I suspect each of these can be limned without trinitarian categories, but make even more sense when phrased in trinitarian terms. “God gives himself” is true and vital; “The Father gives the Son” adds a depth and glory to it.