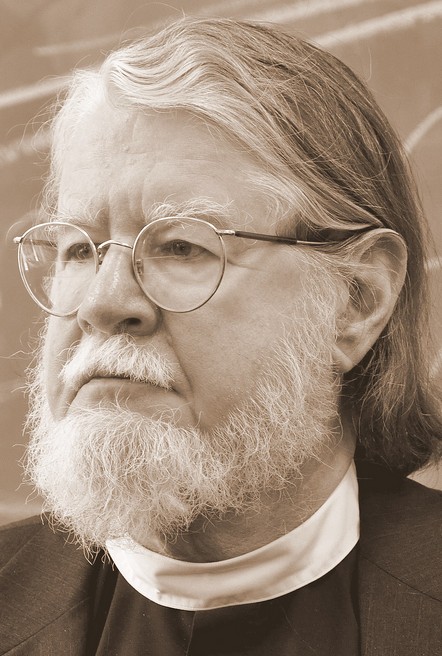 Robert W. Jenson is one intriguing, stimulating, and important American theologian. David Bentley Hart once called him “America’s perhaps most creative systematic theologian,” and Hart ought to know. A friend of mine started reading his Systematic Theology Vol. 1 a few years ago, and sent me an e-mail that said (maybe in all caps) “It knocked my socks off, so I’m reading barefoot!” There’s plenty for evangelicals to take issue with in Jenson, but there’s also plentiful insight that you can’t get from any other thinker, making him well worth reading. A good guide to what’s what in Jenson’s doctrine of God, and why he’s so worthwhile to come to terms with, is the recent book The God of the Gospel: Robert Jenson’s Trinitarian Theology, by Scott Swain.

In 2007, Jenson wrote a little 9-page reflection on his life for the “Theological Autobiography” feature in the Lutheran Dialog: A Journal of Theology. There’s a passage in it that, only half-remembered, keeps coming back to me, so I looked it up this week. Here’s the portion that stuck in my memory:

Members of my generation of midwestern Lutherans went to theological graduate school in unprecedented numbers, and returned determined to liberate midwestern Lutheranism from its ethnic ghetto…. We –and of course other very differently intentioned agitators– succeeded all too well. With unbelievable rapidity, Lutheranism in this country went from isolation to being just another “mainline” Protestant denomination. This experience of unintended consequences is always present as a caution in my thinking.

I don’t know much about midwestern Lutherans beyond the impression I get from Garrison Keillor that they are so risible as to make good punchlines for all sorts of Wobegon jokes. But from terms like “ethnic ghetto” and the desire of a rising generation to bring back some liberation they got in theology graduate school, I think I get the picture.

What strikes me about this brief autobiographical comment is the sense of regret at the edges. You might  expect retrospection to have drawn a different lesson: We young turks set out to tear down the stupid walls that divided our subculture from the real world, and we succeeded. We knew there must be more for us than this provincial life, and we went out and found it for ourselves and our churches. No doubt the dividing walls were truly awful, the hothouse truly stifling, and the cramped cultural space those midcentury, midwestern, midcult Lutherans were forced to occupy was really restricting to their growth. Anybody who has come of age in such an enclave will sympathize, remembering the bizarre assumptions, the taboos, and the low intellectual ceiling that leads to a spiritual stoop. I’m sure they had to shove against all of it.

But in retrospect, what Jenson has to say is “we succeeded all to well.” They tore the old place down, and what they have to show for it is a Lutheranism that cannot be distinguished from every other left-leaning Protestant denomination. Since we are hearing these autobiographical ruminations from an elderly man, we get to hear him musing on what it’s like to live in the world you helped create by your activism. It would be too much to expect the young to have that kind of foresight, and impossible for them to have hindsight –except for the vicarious kind we can all have by learning from our elders. “This experience of unintended consequences is always present as a caution in my thinking.”

Once I had Jenson’s brief autobiographical essay out, I couldn’t keep from re-reading it. There are little gleams of insight and honesty scattered throughout it, usually in deft and well-turned phrases I wish I could produce. Here are the bits that stood out to me.

Let me start in college, where it first occurred to me that my inherited religion claimed to be true –and therefore might be false.

I was very –as they say– “active” in college, but also did some studying.

On my own, I dabbled in Nietzsche, Marx and modernism in poetry –it will be seen that my Christianity was under some strain.

I decided that one had indeed to jump into thousands of fathoms. My boat seemed to have two sides and no bow or stern.

By reading books professors cautioned against -Gunkel, Mowinckel and such– I discovered that the Bible was interesting –yet another obvious point that dawned late upon me.

On what he learned from Bultmann:

On what he learned from Barth:

Systematic theology is willy-nilly metaphysics, to be engaged on a level field with such as Aristotle or Hegel.

When Jenson was hired at Luther College (his alma mater), the religion department objected, and campaigned (along with its “churchly constituency”) for his removal. The “uproar” escalated quickly; the administration came under fire for not dismissing him; and as Jenson reports it, “when the board upheld the administration, and I was asked to stay, the religion and biology departments resigned en masse.”

The experience left us with abiding aversions, two of which would influence future theological choices. We do not easily trust churchly leaders; those who should then have intervened or advised looked away. And we acquired a distaste for the rabies theologorum— I know that some may find this implausible, but it is the fact.

A couple of notes on that passage: when he says “us” and “we,” Jenson is consistently including his wife, Blanche. He describes all of his book as collaborations with her, and the two were for years a familiar pair attending academic conferences together (pretty unusual behavior for any theology spouse). And when he says that some readers may find it implausible that he dislikes the rabies theologorum, the rage of theologians (in Erasmus’ phrase), it’s because Jenson’s personal intellectual style is, well, not un-feisty. I once heard him at a conference answer a question from the audience with a single word, which I will not print here but which, as you might have guessed, has to do with bovine manure, after which he pretty much dropped the mic and returned to his seat. But no rabies theologorum, he promises!

On their time in Oxford:

We found ourselves in the heart of Anglicanism, then still possessing its seductive combination of rabies-free theology and the West’s most faithful liturgical order, the Book of Common Prayer.

I, from the first moment I considered the matter, have seen the ancient sacramentally-structured governance of the church as a gift of God –and for American Lutherans an antidote to rule by bureaucrats.

I thought of ecumenical dialogue as the attempt together to think new thoughts, that might transcend otherwise intractable divisions. The Catholic members had the same view; the Lutherans did not…

When you spend hours every week or so plotting conferences and study projects, always concerned that speakers and topics cover at least part of the ecumenical spectrum, it changes your ecclesial perceptions.

On writing Unbaptized God, his study of ecumenical theology

To prepare, I spent a  year doing nothing but reading trinitarian and christological tracts of the Fathers and a few medievals… I have never emerged from that plunge into patristic theology; Gregory of Nyssa, Cyril of Alexandria, and Maximus are always on my mind.

The town was well located for participation in the years of protest… Blanche and I joined the marches against the Vietnamese intervention; we withheld taxes; I gave speeches in hostile places; parents would not let their children associate with our daughter; etc. And after it all we experienced the same downer as others did: we thought there should be a straightforward move from opposition to segregation or an unjust war to opposition to killing unborn children as desired, but “the movement” and our political party went another way.

The family God gave us has been itself a theological event.

I end this piece by summarizing the preface of the Systematic Theology: to be authentic, theology must be written for the undivided church that the Spirit will surely someday grant. I intend to keep trying.