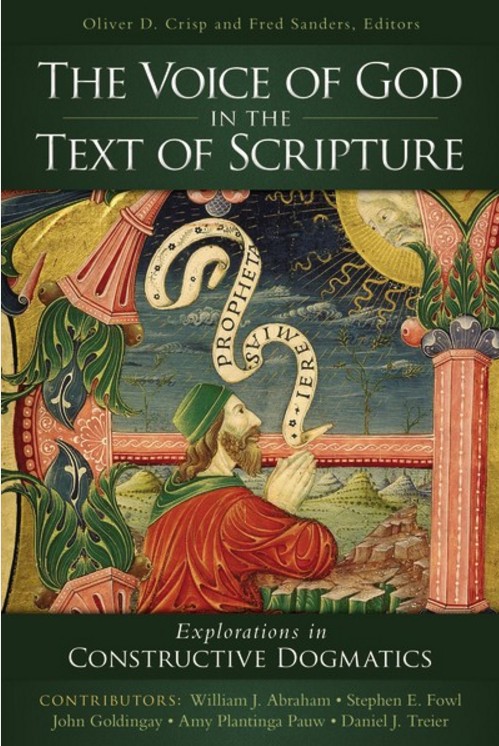 Today is the official release of the new book that Oliver Crisp and I edited, The Voice of God in the Text of Scripture: Explorations in Constructive Dogmatics (Zondervan, 2016). This book contains selected papers from the 2016 Los Angeles Theology Conference of the same name. Katya Covrett and the team at Zondervan Academic have once again managed to get the book published in the same calendar year as the conference, to my abiding astonishment.

This is a book about the doctrine of Scripture, and I think it serves as a pretty good introduction to the current state of the discussion of bibliology. If I were teaching a class, I would assign this book alongside the impressive volume (impressively voluminous as it is) edited by D.A. Carson, The Enduring Authority of the Christian Scriptures. The Carson book is more comprehensive and more consistently conservative, but this LATC volume, in less than 200 pages, provides the lay of the land and showcases the main options for giving a constructive account of what Christian Scripture is.

The book’s usefulness as a guide to the whole field of bibliology can mostly be credited to Daniel Treier, whose opening chapter is a masterful survey. It’s also a constructive proposal in its own right, because it provides a framework for understanding “the hermeneutical concreteness of Scripture’s self-presentation…in discerning, developing, and defending the church’s teaching.” This is a very wise essay, and for me at least, it provides the bright lines within which a comprehensive doctrine of Scripture needs to fall.

Stephen Fowl’s chapter, “In Many and Various Ways,” also ponders the nature of Scripture as God’s speech, and does so by taking up and reading the book of Hebrews with our contemporary concerns in mind.

John Goldingay’s “Hearing God Speak From the Old Testament” is feisty, but I repeat myself: I already told you it was by John Goldingay. Goldingay wants to have it all: responsible scholarly interpretation, and the ability for Christians to hear God saying new things in those old words. He gives examples from his own life, of a personal situation fifty years ago in which Deuteronomy 17’s “you shall not return that way again” came to him as a promise and an assurance of faith. He also relates a more recent instance of guidance in which the words “Go in peace” (Judges 18) illumined a decision he needed to make. Lots of believers have these experiences. Goldingay defends them with his considerable acumen.

Amy Plantinga Pauw takes up the wisdom literature of the Old Testament and derives from it a distinctive account of revelation and of the divine voice, an account that contrasts with the oracular, “thus saith the Lord” model of the prophetic or salvation-historical literature.

Myk Habets takes a clue from Hebrews that shows him how to read retroactively and retrospectively, in his chapter “That Was Then, This is Now.” As with Fowl’s Hebrews-focused chapter, this one is both a recommendation of how to proceed, and an example of actually doing it by reading the text.

Erin Heim’s chapter looks at the use of metaphor in Scripture, and draws out some implications for theological method. One of the ways God communicates in Scripture is by being a Metaphor-Maker who draws us into a sameness of vision in which we share God’s own perspective on truth. I predict this chapter by a Biblical Studies scholar will be very helpful for theologians; it is several steps ahead of the way most theologians think about metaphors.

Speaking of interdisciplinary cross-pollination, the chapter “The Voice of God in Historical Criticism,” co-authored by philosopher Timothy Pickavance and theologian Jason McMartin, applies the epistemology of disagreement to the question of how believers ought to assess historical criticism. For theologians who had not so much as heard that there was such a philosophical field as “the epistemology of disagreement,” this chapter is a good introduction to it and a creative application of it to the use of Scripture.

William Abraham’s chapter, “Post(modern) Biblical Historiography” is “an interim report from the front lines” which directly engages Ernst Troeltsch as well as Alvin Plantinga’s own critique of Troeltsch. The goal is to get some perspective on why Biblical Studies was invented in the first place, and to assess whether it can still do the job it was invented for.

Daniel Lee’s “Reading Scripture in Our Context” makes use of “Double Particularity in Karl Barth’s Actualistic View of Scripture.” Lee is interested in providing the theoretical underpinnings for hearing God’s living voice in all the concreteness of our contemporary situations.

The last chapter in the book turns its attention to final ends or purposes. Ryan Peterson asks what Scripture is for, and gives an Augustinian answer: It’s “For the Love of God” and the formation of human identity along our journey. His conclusion about how Scripture produces and shapes human love forges a strong connection with spiritual formation, and also manages to provide some proper context for discussing the truthfulness of Scripture.

As I said, the book is now available, so come and get it.