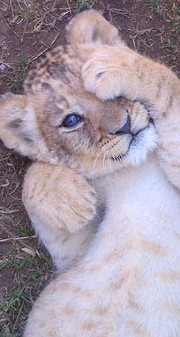 I’ve pondered before how odd it is that there is no Narnian nativity, no incarnation of Aslan in the fantasy world of C.S. Lewis. Lewis has his Christ-figure die and rise again, create heaven and earth, and return in judgement, but he carefully avoids depicting the incarnation of Aslan as a cub. There is no adorable baby lion cub in these books.

It’s not just that Lewis averts his authorial gaze from the cradle of Aslan, he actually rules it out in advance. When Aslan arrives, he comes from across the sea, or perhaps down from the high country above Narnia. Full grown and roaring, as it were. The main reason, I think, has to do with the fact that Lewis rejects the idea that the Son of God would be incarnate in multiple forms in multiple worlds. So Aslan is Christ not by being an alternative incarnation in another world, but through more appropriately literary means: symbolism.

But here’s another way of thinking about what Lewis is up to. We know Lewis was very excited about the fact that religions and mythologies all over the world featured a “Corn King” character, a god (or the son of a god) who died with the Winter and rose again with the Spring. One of his reasons for initially rejecting Christianity was that its dying-and-rising god, Jesus, held loaves in his hand and said, “I am the bread of life,” but didn’t seem to understand enough about comparative religion to understand what he was saying. Christianity, it seemed to Lewis, was just another Corn King religion, but not a very bright one. Part of Lewis’s intellectual journey to conversion was when he realized that the existence of parallels in other religions didn’t count as evidence against Christianity, but as evidence for it: they were exactly the kind of thing you’d expect if the Christian story were the true one. That ubiquitous Corn King is a confused reflection, a jumbled and mythological version of the real story of the one who brings life from death.

But when it came time to write Narnia, Lewis had to figure out how to weave the powerful image of the dying-and-rising-god in. The weather of the book goes from bleak midwinter to sudden Summer. First comes Father Christmas, which is just weird and wonderful. The whole point of having Winter, apparently, is to have Christmas; the White Witch’s reign has reversed this order. But the actual melting of the snow begins when Aslan is on the move, when he is known to be arriving, when he comes to his world as rightful ruler. And then Aslan dies, only to rise again in power, the central event of the book.

From the perspective of a dying-and-rising-god-bringing-springtime mythos, it ought to be the death of the god that breaks the spell of winter. Lewis preferred to associate the breaking of winter with the arrival of Christ; that is; in this real world, with the beginning of the incarnation. As a storyteller, he sidesteps the incarnation in Narnia, gets the rebirth of the seasons out of the way early, and then focuses his attention on the death of the Christ-figure.

That death, and the following resurrection, didn’t happen to bring Springtime out of Winter. It happened for us and for our salvation, for the forgiveness of our sins, to rescue us from the consequence of our Edmund-like betrayal of trust and our voluntary servitude to the powers of evil. Because whatever Lewis learned from pondering Corn King religions, and whatever adjustments he had to make to the Christian message to present it in fairy-tale imagery with talking animals, he never bent or confused the main ideas.