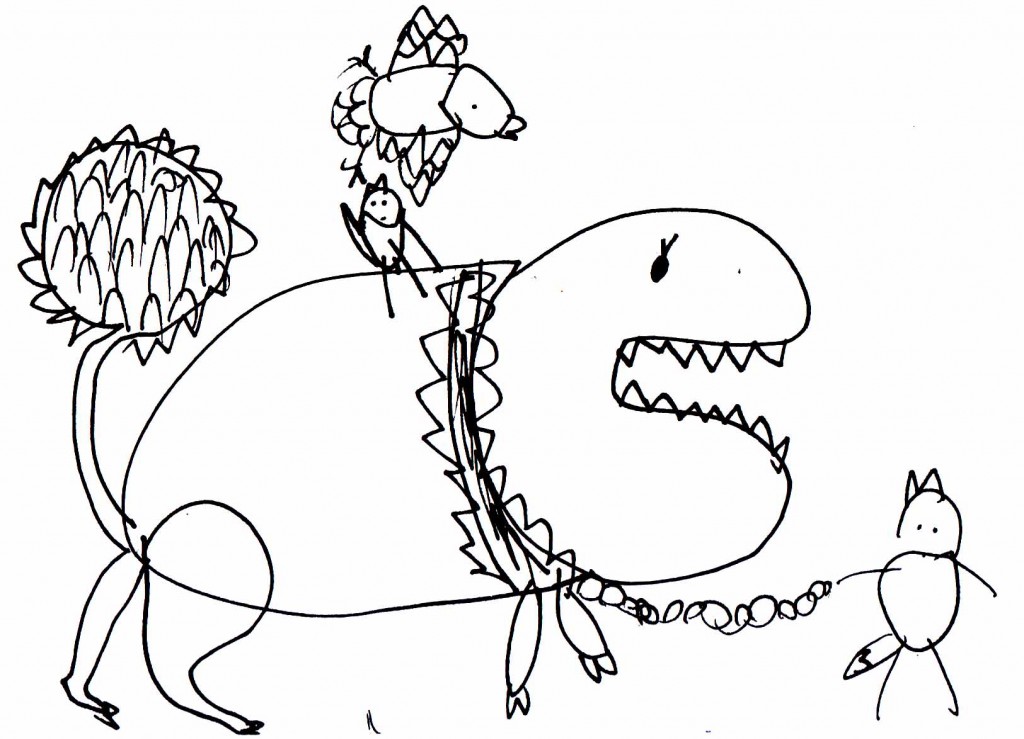 The representational skills of the artist known as Phoebe Age Nine have undergone considerable development in recent years. Her early work was already masterful, but in earlier compositions, she tended to concentrate on a few simple shapes. The power of early works like 18 Cats in 5 Minutes came from the strict limits she placed on herself: one or two shapes, reconfigured and stretched in various ways, but mostly repeated throughout an entire composition.

In her latest works, she has continued to make the most of a few simple shapes. The image of the cat has not changed much at all; it is still an assemblage of round forms and wedges with a few sticks and dots. But Phoebe Age Nine takes the wedge that has previously been only a cat’s ear, and presses it into service as the overlapping feathers of a bird’s wing, the spikes on a monster’s collar, or the monster’s teeth or tail-scales.

But these recent works also give Phoebe Age Nine the chance to demonstrate that she is master of many shapes. The monster can partly be broken down into a few modified cat-shapes, true: those front legs and claws are obviously just upside-down cat heads, complete with two ears, stretched out. And the monster’s head and body are, similarly, distortions of cat shapes. But look at the back leg of the monster: a veritable drumstick, a canine femur-tibia complex if there ever was one.

The formal and stylistic elements of this composition are endlessly fascinating. The content of the imagery, on the other hand, doesn’t seem to require any explication. It’s just a cat walking a monster on a leash, with a smaller cat riding the beast and bird flying overhead.