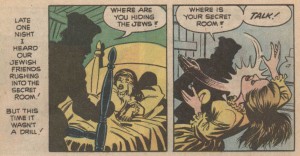 In an age when Hitler has become a punch-line, a youtube “downfall” meme, and the barometer of when an argument has reached its limits (reductio ad hitlerum), it’s hard to feel the weight of the armed anti-semitism of the mid-20th century. After decades of classroom ethics dilemmas like “If lying is always wrong, would you tell the truth if Nazis asked you if you were hiding Jews,” it’s shocking to remember the heroism of the people who literally woke up to find Nazis forcing their way into the house to seize the refugees.

Today (February 28) was the day in 1944 when Corrie Ten Boom (1892-1983) and her family were arrested by the Gestapo and taken to prison for harboring refugees in a secret room in their home. The rest of her family died in prison or in the concentration camp, but Corrie was released because of a clerical error, and lived to write a powerful best-selling book, The Hiding Place. The most dramatic part of her story is told at the Holocaust Museum’s website, and her home in the Netherlands is now a museum honoring her family and their story.

Corrie Ten Boom lived to a ripe old age in sunny southern California, and her Dutch Reformed heritage mixed with American charismatic practice in interesting ways. Her long life story includes many instances of dramatic witnessing to the truth and power of the gospel, including the occasion on which she met and forgave one of her own prison guards long after the war. I grew up with The Hiding Place in book, movie, and comic book format, and in the back of my mind I knew that being a Christian was serious business: You have to get ready for the sudden wake-up and the test of your mettle. Corrie Ten Boom and her family were ready.