I’m not sure what came over John Wesley, but one day he got positively excited about the idea of showing the organic, systematic structure of Christian faith. This kind of passion for understanding structural relationships was not his normal way of working: he was a preacher and a world-changer, not a theological ponderer or chart-maker. But on at least one occasion, he took up the task of showing how the various parts of Christian faith were related to each other, with a special interest in their relative rankings. Did I say faith? I should have said love, or even zeal, to be true to Wesley’s own terminology.

He was preaching (sermon 92) on the text Galatians 4:18, “It is good to be always zealously affected in a good thing,” and it seemed to dawn on him that our loves, the things we are zealous for, need to be ordered according to the goods they are directed toward. Our zeal should be directly proportional to the things God has regard for.

“In a Christian believer,” says Wesley, “love sits upon the throne which is erected in the inmost soul; namely, love of God and man, which fills the whole heart, and reigns without a rival.” This is typical Wesley: an Augustinian statement re-framed for the eighteenth century, re-stated as an insistence of “heart religion.” But his next move is to begin showing how all the other goods are ordered around that enthronement of love in the inmost soul:

In a circle near the throne are all holy tempers; – longsuffering, gentleness, meekness, fidelity, temperance; and if any other were comprised in “the mind which was in Christ Jesus.” In an exterior circle are all the works of mercy, whether to the souls or bodies of men. By these we exercise all holy tempers- by these we continually improve them, so that all these are real means of grace, although this is not commonly adverted to. Next to these are those that are usually termed works of piety – reading and hearing the word, public, family, private prayer, receiving the Lord’s supper, fasting or abstinence. Lastly, that his followers may the more effectually provoke one another to love, holy tempers, and good works, our blessed Lord has united them together in one body, the church, dispersed all over the earth – a little emblem of which, of the church universal, we have in every particular Christian congregation.

Wesley wants us to take the ordering seriously: “This,” he affirms, “is the entire, connected system of Christianity: and thus the several parts of it rise one above another, from that lowest point, the assembling ourselves together, to the highest – love enthroned in the heart. And hence it is easy to learn the comparative value of every branch of religion.”

Wesley himself provides the image of the enthronement of love, with circles around it; and there are only a few ways to turn his words into a diagram. Here is one: 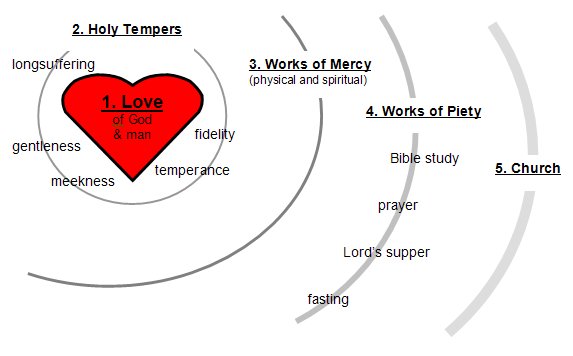 The first step is the most important: Love of God and man will manifest itself in “holy tempers,” among which Wesley lists fruits of the Spirit. No doubt he would also insist on the “train of affections” and emotions as well, but here he leaves out things like joy in favor of emphasizing the most peaceable of the tempers (“the mind that was in Christ”). His reason for doing this was probably that he was preaching about zeal, and wanted to make the point that zeal was not the same as being wild and intemperate in pursuing the good. So Wesley begins from the heart and moves out to tempers.

One of the most interesting transitions in this system is the direct path from the holy tempers to works of mercy. You might expect Wesley to move from tempers to spirituality, but instead he goes to works of service: “In an exterior circle are all the works of mercy, whether to the souls or bodies of men.” Wesley must have in mind here the traditional medieval lists of the “seven corporal works of mercy” (feed the hungry, clothe the naked, visit the sick, bury the dead, etc) and the “seven spiritual works of mercy” (instruct the ignorant, forgive offences, comfort the afflicted, pray for others). Wesley, somewhat unusually, calls them “real means of grace,” since by these actions we “exercise all holy tempers” and “continually improve them.” The works of mercy are outlets for the necessary self-expression of the holy tempers that arise from a heart transformed by love.

Only then does Wesley move out further to things “that are usually termed works of piety,” or spiritual disciplines like “reading and hearing the word, public, family, private prayer, receiving the Lord’s supper, fasting or abstinence.” For this priority of service over spiritual formation, Wesley cites Scriptural passages like “God will have mercy and not sacrifice,” and even lays down the principle:

Whenever, therefore, one interferes with the other, works of mercy are to be preferred. Even reading, hearing, prayer are to be omitted, or to be postponed, “at charity’s almighty call;” when we are called to relieve the distress of our neighbour, whether in body or soul.

And last of all, Wesley comes to the church, which “our blessed Lord has united …together in one body” so that believers can “provoke one another to love, holy tempers, and good works.” And within the church he makes yet another distinction, with the universal church on one hand, being most important, and a local gathering of believers on the other, being less important.

How should zeal work, then? It should be proportioned to the level of good in each of these: Every Christian should love and pray for “that particular church or Christian society whereof he himself is a member,” but even more for “the church universal.”

“But,” warns Wesley, “he should be more zealous for the ordinances of Christ than for the church itself; for prayer in public and private; for the Lord’s supper, for reading, hearing, and meditating on his word; and for the much-neglected duty of fasting.” These are at a higher order of good than the church, which exists to make these happen.

But these spiritual disciplines, or “ordinances of Christ,” rank lower than the works of mercy, the good works that we should be zealous for.

But as zealous as we are for all good works, we should still be more zealous for holy tempers; for planting and promoting, both in our own souls, and in all we have any intercourse with, lowliness of mind, meekness, gentleness, longsuffering, contentedness, resignation unto the will of God, deadness to the world and the things of the world, as the only means of being truly alive to God. For these proofs and fruits of living faith we cannot be too zealous.

But at the center is love itself: “the end of the commandment, the fulfilling of the law.” For Wesley and his system of zeal, “the church, the ordinances, outward works of every kind, yea, all other holy tempers, are inferior to this, and rise in value only as they approach nearer and nearer to it.”