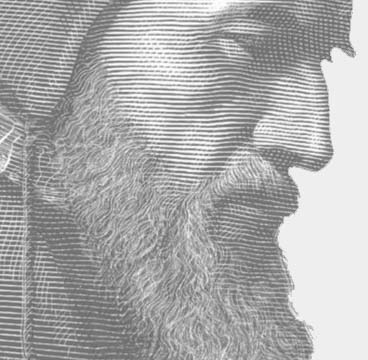 For the frontispiece of his book Calvin on the Christian Life: Glorifying and Enjoying God Forever, Michael Horton chose one of the best passages in the entire Institutes.

It’s a paragraph –four sentences, actually, though the central sentence is one of those long, classical affairs with eighteen “if”s in it– in which Calvin delivers the payoff to a long, cumulative argument. The setting is Book II, chapter 16. He has just worked through the life of Christ following roughly the order of the Apostles’ Creed, which he says he has followed “because it states the leading articles of redemption in a few words, and may thus serve as a tablet in which the points of Christian doctrine, most deserving of attention, are brought separately and distinctly before us.” Then, after having analyzed how each aspect of Christ’s work is effective for us and our salvation, Calvin delivers this comprehensive summary:

We see that our whole salvation and all its parts are comprehended in Christ. We should therefore take care not to derive the least portion of it from anywhere else. If we seek salvation, we are taught by the very name of Jesus that it is “of him.” If we seek any other gifts of the Spirit, they will be found in his anointing. If we seek strength, it lies in his dominion; if purity, in his conception; if gentleness, it appears in his birth. For by his birth he was made like us in all respects that he might learn to feel our pain. If we seek redemption, it lies in his passion; if acquittal, in his condemnation; if remission of the curse, in his cross; if satisfaction, in his sacrifice; if purification, in his blood; if reconciliation, in his descent into hell; if mortification of the flesh, in his tomb; if newness of life, in his resurrection; if immortality, in the same; if inheritance of all blessings, in his Kingdom; if untroubled expectation of judgment, in the power given to him to judge. In short, since rich store of every kind of good abounds in him, let us drink our fill from this fountain, and from no other. (Institutes 2.16.19)

Somewhere along the way in that central sentence, the alert reader notices that the flow of thought comes from the familiar key terms of the second article of the Apostles’ Creed: cross, descent into hell, resurrection. It’s the story of Jesus, but specifically it’s in the concise narration of the creed. What Calvin is doing in this elaborate sentence is taking the points of the creed and drawing out their soteriological implications. Each of these actions of Christ has saving power, and Calvin names each of them in turn, with his if-then structure: If we seek redemption, then it’s in the passion; if we seek eternal life, then it is to be found in his resurrection, etc. 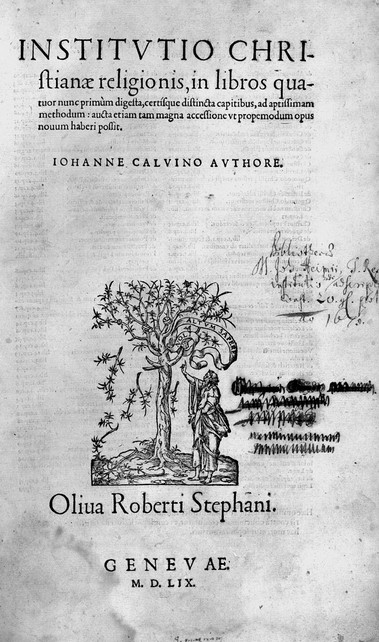 This long sentence of many “if”s is sandwiched between two shorter ones that both make two related points about the comprehensiveness and exclusivity of the salvation that is found in Christ: It’s not just some of our salvation, or parts of it, but “our whole salvation and all its parts” that are in Christ, as “a rich store of every kind of good.” Therefore we must “take care not to derive the least portion of it from anywhere else,” but to “drink our fill from this fountain, and from no other.” It’s all in Christ, and you should seek no other, Calvin insisted to a church culture that was trying to unlearn its bad habits of supplementing salvation with a little of this, that, and the other thing. Salvation in Christ is comprehensive and complete, shutting out other saviors.

But those conclusions depend on Calvin making his case in the central sentence, the one that draws water joyfully from the well of salvation by returning over and over, if after if, to the things confessed in the middle of the Apostles’ Creed.

This sentence actually tracks the Apostles’ Creed much more closely than most people notice. It first got my attention when I began to wonder about the line “if we seek strength, it lies in his dominion.” The reason “dominion” appears here is that it is answering to the creed’s confession that Jesus Christ is Lord, which would be dominus in Latin. We have strength from his lordship, his dominum. So the Creed’s confession of faith in “Jesus Christ our Lord” gets unpacked by Calvin as

Jesus = YHWH is salvation = “if we seek salvation, we are taught by the very name of Jesus”

Christ = the anointed one = “If we seek any other gifts of the Spirit, in his anointing.”

Lord = dominus = “If we seek strength, it lies in his dominion.”

If you pick up the trail this early in the sentence, you realize the Apostles’ Creed is providing all the main ideas for this beautiful sentence all the way through. Calvin’s creativity and eloquence (remember his academic training is as a renaissance humanist) come in the way he frames the “if”s and names the benefits of salvation.

Here is a visual display of the way the sentence maps onto the second article of the Apostles’ Creed: 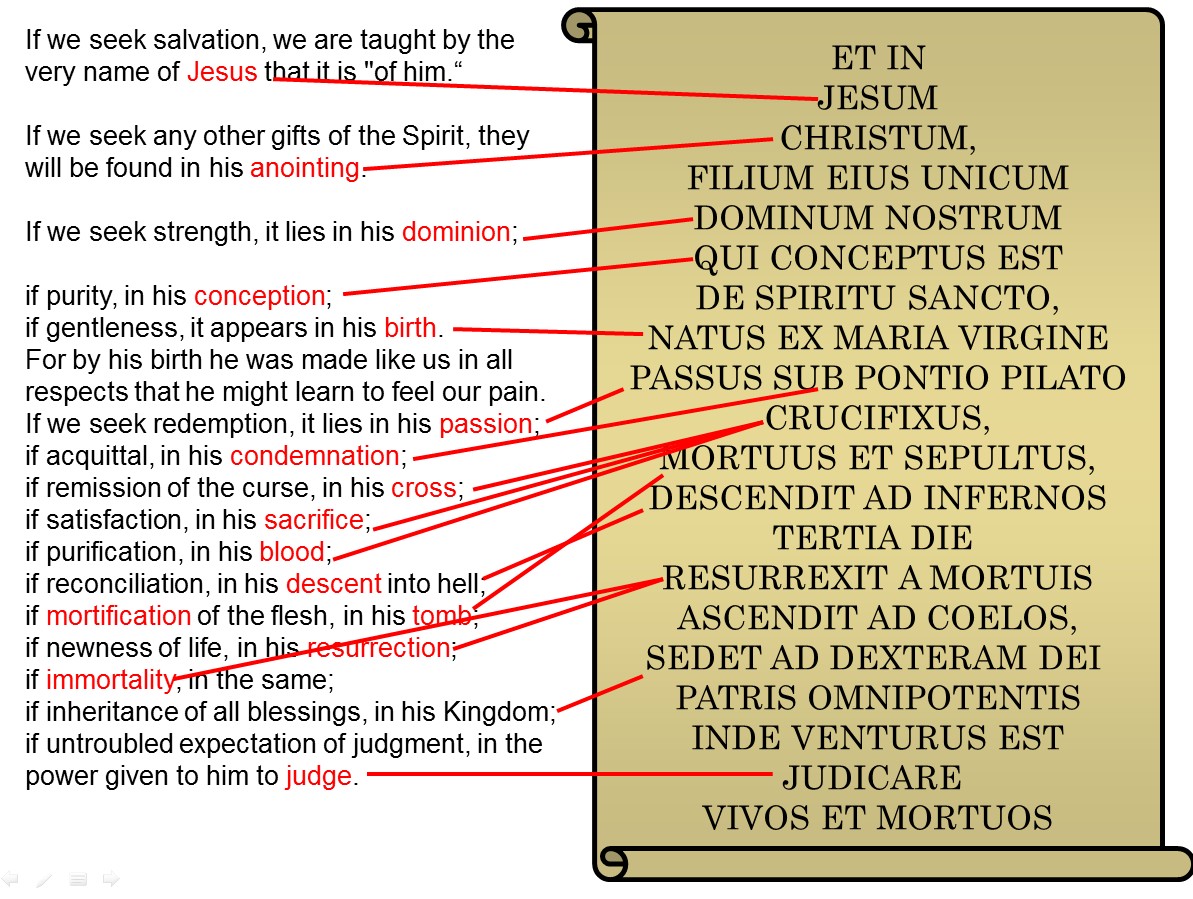 After “Lord Jesus Christ,” you can see it’s all there: conception, birth, passion, condemnation, cross, and so on to our “untroubled expectation of judgment” based on his coming “to judge the living and the dead.” Printing the Apostles’ Creed in Latin helps you track how Calvin is moving from one word to the next (you don’t need to know Latin to get the benefit; the key words are all cognates).

A couple of interesting correlations: Calvin says we have “acquittal” from Christ’s “condemnation.” That’s a lovely statement of the great exchange that is salvation, but what part of the Apostles’ Creed is it explaining? My guess is that it corresponds to “sub Pontio Pilato,” under Pontius Pilate. A lot of people have wondered why Pilate is singled out for inclusion in the creed (the only other proper names are Father, Son, Holy Spirit, and Mary!). The main idea Calvin draws from the mention of Pilate is that he acted as judge, and was the responsible party (washing his hands accomplished nothing) for the condemnation of Jesus.

Another odd feature is that Calvin breaks his rhythm to draw out the importance of the cross, naming it three times: cross, sacrifice, blood. All three nouns correspond to the verb “was crucified,” and then he’s back into the cadence of one noun to one verb. In its own way, that draws out what the creed itself is doing when it lingers here by saying Christ was “crucified, dead, and buried; he descended into hell.” The key point is “crucified,” which the creed then triple underlines: dead, buried, hell.

Calvin’s close reading fo the Apostles’ Creed is even more evident if you examine Calvin’s text in its original Latin. Here is a chart that lets you do that: 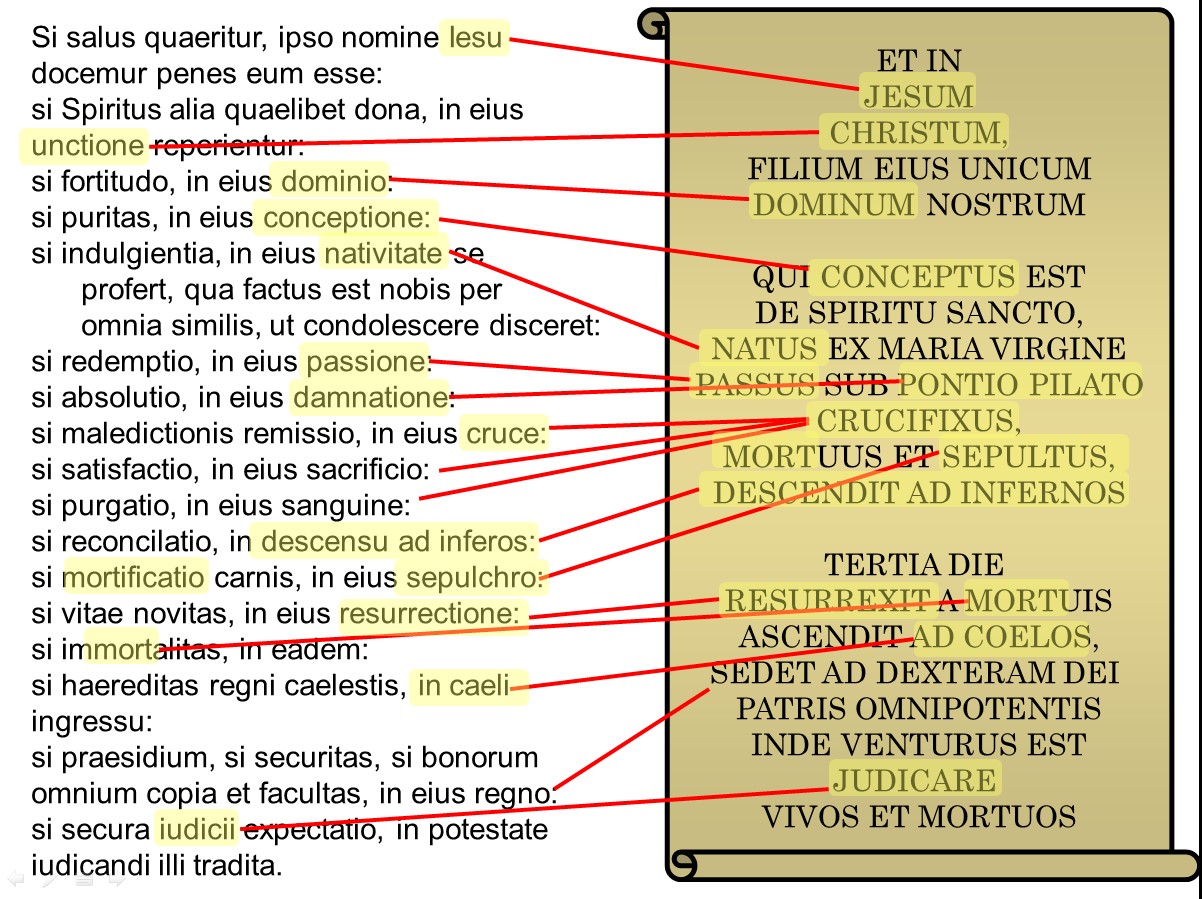 Again, a little basic vocabulary is enough to enable you to see the verbal correspondences popping off the page. Calvin does especially nice work playing with the word death (“mort-“) in phrases like “mortification of sins,” “immortality,” as they correspond to “mortuus et sepultus” (dead and buried) and “resurrexit a mortuis” (rose from the dead). It’s a very tight set of correspondences; Calvin braids together salvation and the creedal story exquisitely.

Since we have the Latin in front of us, there’s one other thing we have the opportunity to notice. Take a look at the enumerated benefits that run down the left edge of the left column: fortitudo, puritas, etc. Notice how many of them are key words in the medieval Roman Catholic pastoral care system: indulgientia, absolutio, remissio, satisfactio, purgatio… I think the standard English translations of the Institutes are just fine. But I also think they necessarily obscure some of the richness of Calvin’s literary power. As he moves down the right column, corresponding to the Apostles’ Creed, he moves down the left column and shows how the sacramental-ecclesial mediatorial system of the Roman Catholic church was being displaced by the sufficiency of Christ himself. If you want indulgences, absolution, remission, satisfaction, purgation/purgatory, find them all in Christ. “Our whole salvation and all its parts are comprehended in Christ.”

In this sentence we have Calvin’s whole strategy of Reformation in a microcosm: leverage the central, most catholic elements of the church’s creedal heritage in order to critique and displace recent deviations. Magnify Christ himself and put his competitors out of business. Find all you need in Christ as the church has confessed him.

In Calvin on the Christian Life, Horton says that Calvin’s  “real genius is to be found in his remarkable ability to synthesize the best thought of the whole Christian tradition and sift it with rigorous exegetical skill and evangelical instincts. His rhetorical rule was ‘brevity and simplicity.'” There’s probably no better example of this real genius than this great sentence from Institutes II:16.19. Go ahead, read it again.