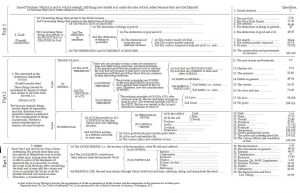 Thomas Aquinas knew how to articulate theology, in the double sense of how to be clear about theology and also of how to divide it up into articles.

What’s an article? Well, I distinguish two meanings of article in Thomas Aquinas. The most important meaning is that an article of faith is a revealed truth that is distinct from others. So the Christian system is made up of all the interrelated articles of faith, whether you want to say there are three of them (as when we say “the three articles are about the Father, Son, and Holy Spirit”) or twelve (as in the old legend where the twelve apostles each added an affirmation to the creed) or about a hundred.

But the other sense of the word is that an article is a particular sub-question in a scholastic discussion. Thomas has 2,652 of these articles in his Summa Theologiae, arranged under 518 questions in about 40 treatises in three parts. And one of those articles, believe it or not, asks “Whether those things that are of faith should be divided into certain articles.” –by which he means articles in the first sense, not the self-referential second sense.

Obviously, he thinks they should be. But why?

Because, as Isidore of Seville explained, “An article is a glimpse of Divine truth, tending thereto” (Articulus est perceptio divinae veritatis tendens in ipsam).

An article is a glimpse. How can we get a glimpse of divine truth? “Only by way of analysis, since things which in God are one, are manifold in our intellect. Therefore matters of faith should be divided into articles.” All the divine truths are one truth in themselves; one in God. But to our intellects they are many and distinct, broken apart analytically for partial consideration. These we can and must take up seriatim.

But reading articles one after another and seeking to grasp their underlying unity and interrelations, we are not cobbling together a composite. We are ultimately seeking the one truth which we know inheres in God.

I think that’s what the phrase, “tending thereto” (tendens in ipsam) is about: Any particular bit of theology gives a glimpse of the one divine truth and –or maybe because– it tends toward that truth.

The 1989 statement of the Roman Church’s International Theological Commission, “The Interpretation of Dogma,” gave this phrase from Thomas an interesting gloss. What would “tendens in ipsam” mean to a team of German-language theologians in the late 1980s? (The team was guided by Walter Kasper, included Christoph Schönborn, and was authorized by Ratzinger.) Their statement really takes its bearings from another nearby statement by Thomas Aquinas, in which he clarifies what a believer is thinking about when thinking about theological truth:

the act of the believer does not terminate in a proposition, but in a thing (“actus credentis non terminatur ad enuntiabile, sed ad rem”). For as in science we do not form propositions, except in order to have knowledge about things through their means, so is it in faith. (II a Ilae, q. 1, a.2, ad 2)

When you believe in God, you affirm an implicit proposition like “there is a God,” but your belief doesn’t terminate on that proposition. You believe through, not in, such sentences.

This turns out to be crucial for the Theological Commission’s statement, and for what it takes “tending to the truth” to be:

In the last analysis, all revelation is the revelation and communication of himself that God gives through his Son in the Holy Spirit so that we may enter into communion with him (DK2). For that reason, God is the one object, all-encompassing, of faith and theology (Saint Thomas Aquinas). As a result, it is quite correct to say that “actus credentis non terminatur ad enuntiabile, sed ad rem” (I I a Ilae, q. 1, a.2, ad 2). In line with that, the medieval theological tradition laid down regarding the article of faith: “Articulus fidei est perceptio divinae veritatis tendens in ipsam” (cited in the sed contra in the Summa theologica, IIa IIae, q. 1, a. 6). This means that the article of faith is really and truly a grasp of divine truth. It is a mediation, effected in doctrine, containing the truth to which it gives testimony. For the very reason that it is true, it recoils, beyond itself, into the mystery of divine truth. It follows from this that the interpretation of dogmas, like all interpretation, is a path which leads us from the word on the outside into the heart of its meaning and finally to the unique and eternal Word of God. And that is why the interpretation of dogmas does not go from a particular word or formula to more of the same. It goes from words, images and concepts to the truth of what they hold within. It also follows that all knowledge by faith is in the end an anticipation of the eternal vision of God’s face.

Here “tendens in ipsam” is taken to mean something like “recoils, beyond itself, into the mystery of divine truth.” What these interpreters are concerned to point out is the personal and eschatological nature of revelation that shows up in every true Christian doctrine. That’s why the paragraph begins with “communication of himself” and ends with “the eternal vision of God’s face.” The goal of our instruction is not words leading to words, but words leading to God. And an article of faith is for that.

One final note: I don’t know where he got it, but Colin Gunton paraphrases this statement from Aquinas as “a dogma expresses a conviction of divine truth which derives from an indwelling in that truth.” (Gunton, Intellect and Action: Christian Theology and the Life of Faith (Edinburgh: T&T Clark, 2000), p. 9). He seems to be quoting it from Barth who Gunton claims is quoting it from Isidore directly, rather than Thomas (CD I/1, 267). “Indwelling in that truth” isn’t exactly a translation of our key phrase, but perhaps, wherever Gunton got it, it’s supposed to be a kind of commentary on the evocative phrase rather than a translation.

Blog posts don’t always need conclusions, especially ones like this that are just a chance to share some notes and try thinking through them. If you’re disappointed I will give you a full refund.