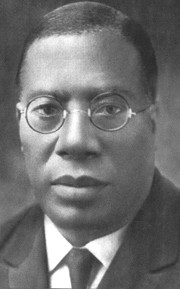 Today (July 26) in 1933, Charles Albert Tindley died at the age of 77. Born just one half-step out of slavery in 1856, Tindley rose to the rank of pastoring a 3,000 member Methodist Episcopal Church in Philadelphia.

Tindley has been called “the prince of preachers” (apologies to Charles Spurgeon), but I haven’t been able to get my hands on any of his sermons and don’t know what the style or content of his proclamation were. He is most famous for his gospel songs. He wrote and copyrighted the songs “When the storms of life are raging, stand by me,” and “If in my heart I do not yield, I’ll overcome some day,” which have had long afterlives in soul music and civil rights anthems, and the durable classic “We’ll Understand it Better By And By.”

Tindley’s original songs weren’t hymns (he continued to use Methodist hymns as the mainstay of congregational singing in his church) and they weren’t black spirituals, but they weren’t the “gospel songs” of the white revivalists either.

One historian of black gospel music has said, “The hymns written by Tindley carried a camp-meeting intensity and fervor that would inspire the later development and crystallization of the black gospel style… He had created space in his songs to accommodate the call and response figures and improvisations that, together with flatted thirds and sevenths and other core-culture performance practices, would come to make the style.”

Poetically, Tindley was the kind of writer who incorporated the speech patterns of everyday usage into his work. He wrote the way people talked. As a result, his songs are arrrestingly simple.

Here is a good summary of his style, from a 1983 article by Horace Boyer, followed by the lyrics to “We’ll Understand it Better By and By.”

Charles Albert Tindley not only was a good composer; he was unique. He knew his Bible and could translate its archaic language into the soft, picturesque, and sonorous language of his people, and ultimately of all people. He was an extraordinary story teller; he told his stories in simple and direct melodies, using harmonies that did not overpower the simplicity of his messages. Above all, he left the spaces necessary for gospel singers to become engrossed in their singing. He too knew that gospel music was the singer’s art, not that of the composer. The progenitor of black-American gospel music was singer and composer in one.

We’ll Understand it Better By and By

We are tossed and driv’n on the restless sea of time;
Somber skies and howling tempests oft succeed a bright sunshine;
In that land of perfect day, when the mists have rolled away,
We will understand it better by and by.

By and by, when the morning comes,
When the saints of God are gathered home,
We’ll tell the story how we’ve overcome,
For we’ll understand it better by and by.

We are often destitute of the things that life demands,
Want of food and want of shelter, thirsty hills and barren lands;
We are trusting in the Lord, and according to God’s Word,
We will understand it better by and by.

Trials dark on every hand, and we cannot understand
All the ways that God could lead us to that bless’d promised land;
But He guides us with His eye, and we’ll follow till we die,
For we’ll understand it better by and by.

Temptations, hidden snares often take us unawares,
And our hearts are made to bleed for a thoughtless word or deed;
And we wonder why the test when we try to do our best,
But we’ll understand it better by and by.