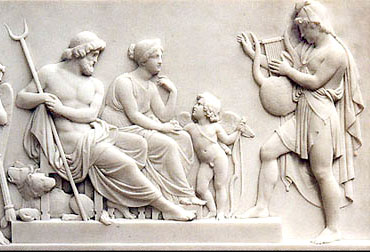 People who worry about the hellenization, or greekifying, of Christianity tend to worry about Platonism. But the interaction with Stoicism has been equally complex and interesting.

Clement of Alexandria (ca 150-215)’s fascinating book Paedagogus is a great early example. The title is variously translated as Tutor, Educator, Instructor, or Teacher of Little Children. etc. It’s a work of Christian ethics, but it incorporates so much from Stoic thought that about a century ago, when form critics were enjoying the apex of their credibility, they hypothesized that it was nothing more than a lightly revised Christian version of a lost work by the Stoic lecturer Musonius (see Charles Pomeroy Parker, “Musonius in Clement.” Harvard Studies in Classical Philology 11 (1901): 191-200). The fact that such a hypothesis could be entertained at all does at least indicate just how pervasively Clement’s Paedagogus uses Stoic terms and ideas.

In many ways, Stoicism makes a sympathetic dialogue partner for Christianity. It derives its ethical ideas from its metaphysic, and its metaphysic is profoundly religious. It emphasizes Providence, the sovereign control God has over all situations. Stoics like Seneca learned from Plato that the highest good was “approximating God as nearly as possible.” Further, Stoicism is free from the seamier elements of Greek religion, the welter of sacrifices and mythologies. There is even in Stoicism a fine tradition of mocking the superstition of popular Greco-Roman religion. Finally, Stoicism developed an idea of a universal community of humanity, connecting individual morality with social ethics. Early Christian thinkers naturally rejoiced to find ideas like these at work in the world, and laid hold of them.

But there were three distinctive principles of Stoic ethics that had some tension with Christian thought, both then and now: they are the principles of autarchy, apathy, and harmony.

1. Autarchy is self-reliance, the self-mastery which keeps one from becoming a burden for anyone else. The idea has always sounded, in the words of Simon Wood, “strange to the Christian ear.” Clement really makes a principle out of this, announcing at one point that “the universe was made for the sake of self-sufficiency,” and drawing conclusions for Christian conduct. But Clement stops short of making it a supreme principle; he weaves it into the biblical idea of bearing the burdens of others. And of course he never extends autarchy to some sort of independence from God; the idea that believers are little children depenent on Christ the Pedagogue is a main theme of Clement’s work.

2. Apathy, or passionlessness, is the Stoic idea that we should not be unduly perturbed by our situation. In its technical usage, apatheia is not to be confused with emotionlessness. For Epictetus especially, it is a question of not being exercised about things which are beyond our control. Stoics elevated this ideal to the greatest mark of perfection in the accomplished sage. Clement identifies this passionlessness with Christ, who like his Father is passionless (Pedagogue II:2,4). Christ is thus the perfect Stoic sage, as well as divine. Stoics philosophers could push the idea of divine apathy so far as to empty God of any feeling. But for Clement, God’s passionlessness does not mean he is unfeeling: Clement’s God feels great love for humanity, but is above being carried away by irrational storms of emotion which sway his perfect judgment. Clement recommends an analogous passionlessness for Christians: we are never to be “put our of our proper habit of mind by a sudden change of circumstance,” (Stromateis VIII:70), but should be “possessed of stillness, quiet, calm, and peace.” (Pedagogue II:60,1).

3. Harmony, or a life in accordance with nature, is the third major Stoic idea which Clement worked out in a delicate balance with his Christian commitment. There is an inherent reasonableness to the way the world was designed by God, and all things work according to a certain providence. Therefore the ethical life is the life which swims with the stream of life rather than against it. In Clement’s Christian appropriation of this motif, there is no final difference between following nature and following the commands of Christ; the creator and the savior are one, so the way of the world moves providentially in the same direction as the gospel. But for Clement, “the way of the world” has to mean the highest reason immanent in the world, not whatever direction things seem to be going.  So he can speak of  the way in which the Word “forcibly draws men from their natural, worldly way of life and educates them to the only true salvation.” While he can argue forcibly from natural law, he can also sometimes argue against the traditional interpretation of it in his culture, as when he insists that Male and Female are alike in the eyes of God and therefore require the same education.

If there is a greekometer spectrum for individual church fathers, modern historians of doctrine have located Clement at the end labelled “oh so very hellenized” (or hella-nized as the kids say).  Philip Schaff called Clement’s work “not a unit, but a confused eclectic mixture of true Christian elements with many Stoic, Platonic, and Philonic ingredients.” Harnack, predictably, went so far as to say that “the Church tradition was here completely transformed into a Greek philosophy of religion.” H. Richard Niebuhr located Clement in the “Christ Above Culture” position in his famous typology, viewing him as a thinker who maintained the supremacy of the gospel even as he was utterly compelled to synthesize it with non-Christian thought. Thomas Merton assured us that Clement’s work showed “no shadow of compromise, relativism, or syncretism,” though one wonders what it would take for Merton to recognize syncretism anywhere. One of the things that has consistently compromised the debate over hellenization is the extent to which it serves as a projecting screen for the agendas and biases of the moderns doing the debating.

In his 1886 Bampton Lectures on The Christian Platonists of Alexandria, Charles Bigg said that Clement “is above all things a missionary.”  He went on:

For one thus minded the path of success lies in the skill, with which he can avail himself of the good, that lies ready to his hand. He must graft the fruitful olive on to the wild stem, and aim at producing, not a new character, but a richer development of the old.

That seems true, at least, of what Clement intended. Whether he actually succeeded in claiming, transforming, and domesticating Stoic ethical categories for his project of Christian education remains, for me, a difficult question.