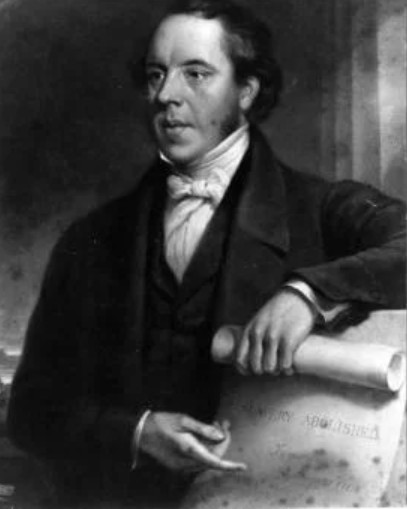 “Happy” doesn’t quite sound right to our ears, does it? It’s not quite a good enough word for this kind of thing. It’s a word that seems to be more about circumstances than character. But according to Knibb according to Spurgeon according to me, it really catches what Paul’s after here: the good news that God is blessed; the gospel of the happy God.

Who was this William Knibb, who said this about this passage? A smiling preacher with a sunny life and his best life now? What kind of preacher would spot this theme in this text and paraphrase it this way?

Knibb (1803-1845) was a British Baptist missionary to Jamaica, and whatever his upbringing or opinions while he lived in England, as soon as he got to Jamaica he was a decided emancipationist. He lobbied, canvassed, protested, and fought for the freedom of Jamaican slaves in the 1840s, and paid a price for it. He was sometimes in danger, often in difficulties, and always in arguments, because the tide had not yet turned against slavery.

You can read about Knibb in the standard histories of abolition (at least the ones that give attention to Jamaica), which tell of his speaking tours (dramatically throwing down actual iron shackles fresh from the colonial slave fields) and his powerful rhetoric (from a letter: “The cursed blast of slavery has, like a pestilence, withered almost every moral bloom… I feel a burning hatred against it and look upon it as one of the most odious monsters that ever disgraced the earth.” From a speech: ” I call upon Christians by the lacerated back of William Black … whose back, a month after flogging, was not healed. I call upon you all, by the sympathies of Jesus.”

Knibb’s sermon on 1 Tim 1:11 was, in fact, the final sermon he ever gave.  He was visiting another pastor’s church, and though that other pastor was supposed to preach the evening service, he felt weak from recent bout of the flu, so Knibb “preached himself –his last sermon– from 1 Tim 1:11, ‘The glorious gospel of the blessed God,’ or as he delighted to say, ‘The glorious gospel of the happy God.'” (Life of Knibb, p. 520).

William Knibb knew that it was good news that God is happy.

One of the most decisive early arguments Knibb got involved in was when slavers made the claim that their slaves were better off in slavery, because after all, they were… happy. Knibb, as an eyewitness to the situation on the ground in Jamaica, knew better. He also knew what happy meant, and he knew it didn’t mean enslavement, the beatings and bondage he documented, the breaking up of families, the lives cut short, the degradation, the shame, the suppression. He knew that slavers were just using the word happy to cover up injustice and keep things as they are.

But Knibb also knew what real happiness is: real happiness is the blessedness of God. Real happiness, the gospel of freedom and salvation and liberation and transformation, is when humans in all their need come under the care of the happy God who has no needs whatsoever, and who undertakes to pay the price of bringing us into fellowship with his own blessedness.

When some of Knibb’s collaborators were imprisoned for their emancipationist work, he went by their prison to visit them and heard them singing hymns to God:

Oh Thou from whom all goodness flows,
I lift my heart to Thee,
In all my sorrows, conflicts, woes,
Dear Lord, remember me.

These miserable people in their need could cry out to the blessed God, from whom all goodness flows. William Knibb and his native co-workers for the cause of freedom knew the source of real happiness, the definition of happiness, the unassailable and sovereign happiness that does not hide misery but exposes it for what it is, and goes after it.

We don’t know what Knibb actually said in that final sermon, but we know that “he delighted” to call it the gospel of the happy God: as Spurgeon said, “the very gist of the matter.”