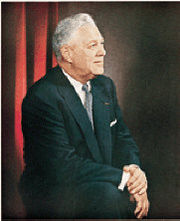 Donald Grey Barnhouse (March 28, 1895, died 1960) is best remembered as the pastor of Tenth Presbyterian Church in Philadelphia, and his most far-reaching ministry was through the radio show “The Bible Study Hour” (later re-named Dr. Barnhouse and the Bible). Among his many books, the most important is probably his four-volume homiletic commentary on Romans.

Because of his strong Philadelphia connection, most people think of Barnhouse as part of the northeastern evangelical establishment, but in fact he was born in California, and is a 1915 graduate of the Bible Institute of Los Angeles. Here is an overview of his California and Biola connections.

Barnhouse grew up in Watsonville, CA. From the age of six he was involved with Christian Endeavor. At age 15 in 1910, he went to an Endeavor conference in San Jose, where he met Bible Institute student Thomas Hannay, Jr. who was serving as the Christian Endeavor State Field Agent. Hannay talked with him, and directed him to pray Isaiah 53 in personalized terms: “I, like a sheep, have gone astray; I have turned to my own way; and the Lord has laid on Him all of my iniquity.” This was the turning point in Barnhouse’s life, and the moment he looked back on as his salvation (though he later came to discern God’s regenerating work leading up to this event). This Tom Hannay, who led Barnhouse to Christ, was an amazing character: one of Biola’s first graduates, he regularly flew a small aircraft out to the town of Mojave to provide church services for the 4,000-man workforce constructing the California aqueduct. Hannay later challenged Barnhouse to be serious in his personal Bible study, marking a second major turning point in Barnhouse’s life.

After high school, Barnhouse enrolled at Biola, where his older sister Mabel Jean was a student. He studied doctrine with Reuben Archer Torrey and did personal work with Thomas Corwin Horton. Torrey took a particular interest in Barnhouse, allowing him to borrow his personal study notes and copy whatever he wanted. But by over-committing to ministry work, Barnhouse failed to complete all his note-taking assignments for graduation. Torrey refused to let him graduate with his class, and required him to finish his notebook assignments and graduate belatedly. Barnhouse graduated and went on to Princeton Seminary with only a Bible Institute certificate rather than a college degree.

Looking back on his BIOLA years, Barnhouse wrote: “During these years I began to get a grasp of spiritual truth. We had a notable succession of white heads who ministered to great audiences in Los Angeles and whom we would hear two or three times a day through a week or two of special meetings: Dr. A. C. Gaebelein, Dr. James M. Gray, Dr. C.I. Scofield, Dr. W. B. Riley, Dr. F. W. Farr and others whose ripe experience, spiritual discernment and intelligence have all left their traces in my own spiritual life.” One of Barnhouse’s professors at Princeton Seminary said: “Donald Barnhouse got his theology from BIOLA, not Princeton.”

While Barnhouse was at Princeton, World War I was on. He enlisted in the army and served stateside as First Lieutenant in the Aviation Section of the Signal Corps, as a flight instructor at Princeton University. During this period, R. A. Torrey spoke at a large rally in New York City, and Barnhouse attended. Torrey called out Barnhouse as “the sky pilot whom he had trained.” Torrey introduced Barnhouse to Ralph Norton and Edith Norton of the Belgian Gospel Mission, which Barnhouse joined when his Army term ended in 1919, and with in which he did great work. In 1921 Mr. Norton said of him, “In March 1919 we welcomed to Brussells this young man who was to play such a large part under God, in the shaping of the work which as been entrusted to us in that land. Someone has said of Mr. Barnhouse, that if he were set down in the heart of the desert he would get along somehow and make a success in life, and God, in His sovereign Grace knew about the desert that was waiting this servant of His” (The King’s Business, Vol. 12.2, February 1921, pg 132).

Barnhouse pastored and studied in several places before taking charge of the Tenth Presbyterian Church in Philadelphia, which he pastored for the rest of his career. The Tenth pulpit was vacated by John McNeill who was moving to Los Angeles to pastor the Church of the Open Door, which was at that time based at Biola.

As many of the B. I. students know… I was elected last year to succeed John McNeill, who in turn had gone to the Church of the Open Door. This church, the Tenth Presbyterian, in the center of Philadelphia, is one of the most historic Presbyterian Churches in this great center of Presbyterianism, and has had a long reputation for its open stand for the faith once delivered to the saints. With my coming here as pastor, many changes were made for the enlarging of the church’s activities. Perhaps the most important was the installation of the radio. Our vesper service on Sunday at 5 p.m., eastern standard time, is broadcasted over Station W.C.A.U. Remember us in prayer and ask that God will move the hearts of many of the thousands who are listening to our preaching, week after week. (The Biolan 1928, p. 49)

With his successful radio ministry, Barnhouse joined an interesting group of people: Disciples of R. A. Torrey who took Torrey’s message to the radio in their own voices. The other two important radio ministers who were personally trained by Torrey were Charles Fuller (Old Fashioned Revival Hour) and Percy Crawford (Young People’s Church of the Air). So although Torrey himself (who died in 1928) rarely spoke on the radio, he trained some of the key players in radio preaching. Their sermons were often taken directly from the notes they took in Torrey’s classes, delivered in their own styles and with their own illustrations added.

A very good article about Barnhouse by Paul Hopkins is available online. Among the many testimonials to Barnhouse’s ministry, C. Everett Koop says “I became a Christian through that teaching” at Tenth Presbyterian Church.