Last year I tried to find the source of the oft-quoted but seldom footnoted saying,

Rooting around in a large collection of Trinity books, I couldn’t find a source any older than 1953. It seemed to me it must be older, but I had no proof. 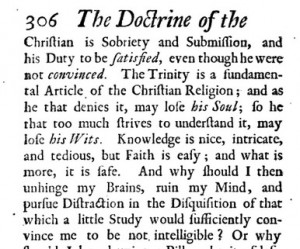 Here is the immediate context:

When the sacred Mysteries of religion are discoursed of, the proper business of a Christian is Sobriety and Submission, and his Duty to be satisfied even though he were not convinced. The Trinity is a fundamental Article of the Christian Religion, and as he that denies it may lose his Soul, so he that too much strives to understand it may lose his Wits. Knowledge is nice, intricate, and tedious; but Faith is easy, and what is more it is safe. And why should I then unhinge my Brains, ruin my Mind, and pursue Distraction in the Disquisition of that which a little Study would sufficiently convince me to be not intelligible? Or why should I by chewing a Pill make it useless, which, swallowed whole, might be Curing and Restaurative. A Christian in these Matters has nothing to do but to believe, and since I cannot scientifically comprehend this Mystery, I shall worship it with the Religion of Submission and Wonder, and, casting down my Reason before it, receive it with the Devotions of Silence and the humble Distances of Adoration.

I’m guessing the saying is original with South, because he was quite the wordsmith, and this saying has his style all over it. The Encyclopedia Britannica noted that “South had a vigorous style and his sermons had homely and humorous appeal. His wit inclines towards sarcasm, and his quarrelsome temperament may have prevented his promotion to a bishopric.” I will be surprised if the saying goes back further than South.

Aside from this sermon, South wrote a longer piece on the doctrine of the Trinity, a famously harsh and satirical attack on Dr. William Sherlock’s controversial book about the Trinity. Sherlock attempted a rationalistic proof of the Trinity from the nature of consciousness, and South attacked him with gusto. From this longer work, we can see that South hates rationalism, and thought that his opponent was guilty of over-thinking the doctrine.

Hence South’s two-edged maxim: Don’t deny the Trinity, don’t try to understand it. Notice that in context, the warning was directed against an over-reaching rationalism. When quoted without that context, I fear the saying serves to discourage normal believers from thoughtfulness about the Trinity, any kind of thoughtfulness at all. A sharp rhetorical barb intended to puncture rationalism, the “lose your mind” bit should not be used to scare Christians away from all thought about the Trinity. Whenever the desire is kindled to think more deeply about God and the gospel, it should not be quenched by warnings like this. Go ahead, think about the Trinity. Unless you think your thinking is the thinking to end all thinking, in which case, you’ll lose your wits, unhinge your brain, etc.

South’s mid-seventeenth century maxim received new life in the 19th century, when theologian William Shedd quoted it at the beginning of an edition of Augustine’s De Trinitate. Shedd (who read so widely and quoted so expansively that it produces fear and trembling in lesser theologians) used South’s line very judiciously:

It is because this doctrine is not discoverable by human reason, that the Christian church has been somewhat shy of attempts to construct it analytically; or even to defend it upon grounds of reason. The keen Dr. South expresses the common sentiment, when he remarks that “as he that denies this fundamental article of the Christian religion may lose his soul, so he that much strives to understand it may lose his wits.” Yet all the truths of revelation, like those of natural religion, have in them the element of reason, and are capable of a rational defense. At the very least their self-consistence can be shown, and objections to them can be answered. And this is a rational process. For one of the surest characteristics of reason is, freedom from self contradiction, and consonance with acknowledged truths in other provinces of human inquiry and belief.

Shedd’s balance is perfect (and the whole introduction deserves a careful reading): He uses South’s witty words to slap down “attempts to construct it analytically,” but then explains multiple ways in which we should be encouraged to bring our reason to the Trinity:

1. The Trinity can be rationally defended
2. It can at least be shown to be self-consistent, non-contradictory
3. It can be shown to be consonant with other truths

In fact Shedd goes on (in the next few paragraphs of the introduction) to say that rational exploration of the Trinity, following in the paths of the early church fathers, will find “the tenets of eternal generation and procession” a major conceptual help. These doctrines “have been regarded as going beyond the Scripture data” by some conservative theologians, “and if not positively rejected, have been thought to hinder rather than assist faith in three divine persons and one God.” Shedd points out that

the history of opinions shows that such sections of the church have not proved to be the strongest defenders of the Scripture statement, nor the most successful in keeping clear of the Sabellian, Arian, or even Socinian departure from it.

And he’s right. It is short-sighted to try to understand the Trinity without making use of the doctrines of eternal generation and procession. A Son comes from a Father, and “eternal generation” is just the conceptual unfolding, for purposes of clarity and defense, of that revealed image of sonship. But that’s a tale for another day, and a digression from the main point of this meandering post.

Thanks to David Steele, who pointed to the source of this quotation at the end of his book review.