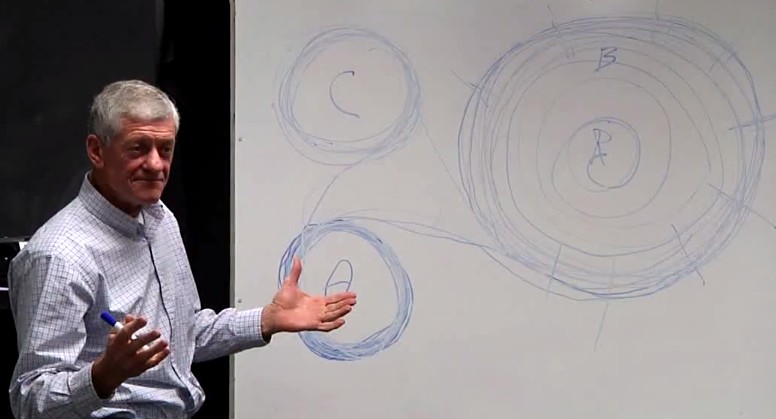 Here is a link to some footage of Bob Warren, who died last week, doing his thing: teaching.

This is vintage Bob –although in one sense this footage is not characteristic of him, in that he doesn’t have his Bible open and he’s not digging away at a text.

In every other way, though, this session displays so much of what I remember about Bob from the years I spent studying with him in Kentucky (1986-1990): the homespun affability, the intensity, the immersion in Biblical patterns of thought, the excitement of learning directly from Scripture, the deep concern to connect with his audience, the unhurried pace. There’s also the fact that this is amateur footage with a slightly restive baby being patted near the microphone.

In this talk, Bob gives part of his testimony, with just enough basketball and rags-to-riches (“I chased the wrong rabbit”) to draw people in. He shares how surprised he was to find out that most people who show up to hear a basketball player talk about the Bible don’t really want to hear about the Bible. He tells how he learned in his 60s that he has dyslexia, and how that diagnosis made sense of so many of his struggles in life.

And he also explains the spiritual dynamics that he calls “the Law of the Circles.” It’s a wide-ranging insight, not easily summarized and in some ways peculiar to a small-town Bible Belt setting, or other subcultures where Christianity can be presupposed and taken for granted. The basic idea is that many believers have a cramped and tightly circumscribed notion of what the Christian life is: basically accepting Jesus so they are forgiven and heaven-bound. But others seem to move in a larger spiritual world, to understand more about God’s ways and words, to see that there is something out there beyond forgiveness-now-and-heaven-when-I-die.  Christians of this type are among us, and as Bob says, “all you gotta do is meet one of those critters, and your life will never be the same.” They call you out of the ruts of circle A into the larger world of circle B. And there’s no route back from B to A; horizons expanded in this way never quite contract again.

It is certainly a problem that circle A is so small and densely populated. But the real problem Bob sees is that there’s a circle C, wherein believers relegate their faith to some sort of subjective commitment, and resolve (consciously or unconsciously) not to think about it anymore. Theologizing, connecting the dots between the great doctrines, meditating on the underlying unities of all of Scripture –these modes of thought are dangerous for circle C, since avoiding them is the whole point of being in circle C and getting on with your life. This resolution also requires that you can only do certain very limited types of Bible study: a thought for the day, perhaps, or a word of encouragement without context.

Some of the residents of circle C have made the whole trip: they became Christians in circle A, grew into circle B, and, worn out by the intensity of B, spun out to C. That’s sad enough. But some of the C people came there straight from circle A. In fact, one of the reasons this is worth attending to is that Bob saw this happening to Christians in their college years: they leap straight from a minimal, reductionistic version of Christian faith to a subjectivized, compartmentalized version of it. They never even saw the big picture.

This is not the main burden of Bob’s life of Bible teaching. That main burden would be much more like the big, central ideas of Scripture itself, to which he was quite devoted. But it is an insight that he reports from a unique location, as a sensitive observer and a committed parachurch Bible teacher, and one that he returned to time after time to account for the vagaries of Christian behavior. He describes it, quite obviously, as a non-academic, and no footnotes are forthcoming at any point. You’ll probably need to paraphrase this into your own terms for your own setting. But if you’ve got an hour to listen to a Bible teacher from Hardin, KY who talks a little bit like Andy Griffith, looks a little bit (as he points out) like Dick Van Dyke, and had a pretty good run in professional basketball, give this a listen and see what you think.

I will miss Bob Warren greatly. He was one of those critters you never get over meeting; whose life and conversation communicated something of a larger world.