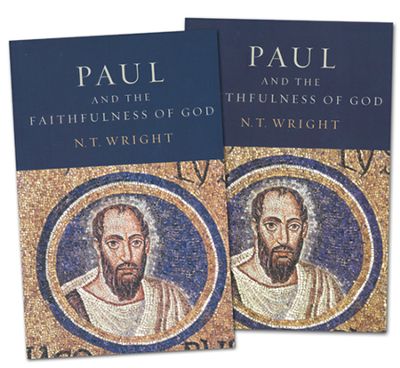 Some books just aren’t long enough. I wasn’t more than a hundred pages into The Lord of the Rings by J.R. Tolkien when I began to dread the ending—not because it was so far away, but because it was going to come all too soon. It is a thing of beauty when that imposing doorstop of a book transforms into a mere abridgement of what it should have been. Of course this is the strength of stories: the ability to condense life into a vision, a compelling account of certain events and happenings that hold us spell-bound and transform our imaginations. If stories were exhaustive, they would just be life on paper, and anyone busy living life just wouldn’t have time to read it.

That feeling is returning to me now, but rather than Middle Earth, it is the world of the Apostle Paul. Only 50 pages into NT Wright’s Paul and the Faithfulness of God, I am already dreading the imminent ending.

The basic thesis of the book is that we obtain the best vantage-point for understanding Paul when we “begin by assuming that Paul remained a deeply Jewish theologian who had rethought and reworked every aspect of his native Jewish theology in the light of the Messiah and the spirit, resulting in his own vocational self-understanding as the apostle to the pagans” (46). This is interesting in its own right, but even more interesting is the claim that, central for Paul in this reformation of his native Jewish theology were his monotheism, doctrine of election, and eschatology (46).

This insight alone is worth the price of admission, for it’s hard to rethink doctrinal relations, and creative things can start happening. Wright is effectively replacing different ways of organizing Pauline theology (such as those which revolve around justification by faith), and doing so around this trio of doctrines: monotheism, doctrine of election, and eschatology. Regardless of whether Wright proves to be correct is in some ways beside the point, though in the long run it matters a great deal. The reason for this is that re-organizing doctrinal inter-connections and priorities stirs the theological waters, allowing for new insights to emerge that were long buried by sediment. In this kind of disturbance, theology is primed to do its best work, taking on a livelier countenance and whistling while it works.

I can’t help but add that I can’t wait to see how Wright’s development of election in Paul relates to the work of Karl Barth on this matter!