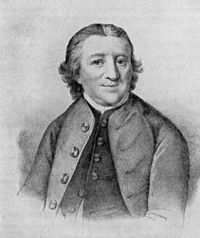 Peter Böhler (b. 1712) died on this day (April 27) in 1775. Böhler was a pastor and missionary from the Protestant group called the Moravians. About the Moravians, and their founder Hus, and their leader Zinzendorf, and their ancient ecumenical entanglements, much could be said!

But as for this particular Moravian, Peter Böhler, his theology and spirituality can be described as a kind of Lutheran pietism. He and his associates were conspicuously filled with joy and confidence on the basis of God’s free forgiveness of their sins through Christ. Böhler was an evangelical on fire, ranging around Europe and England, criss-crossing the Atlantic to spread the good news of faith in Christ and freedom from condemnation.

That was the Peter Böhler who collided with John and Charles Wesley in 1737, just as the Wesley brothers were at their lowest ebb spiritually. The Wesleys were ordained Anglican ministers, and had done overseas missionary work. But when they met Böhler and his people, John and Charles finally began to understand that if this is what true Christianity was, it was something that the Wesleys still lacked.

Böhler and his Moravians didn’t just live out shining examples in front of the Wesleys. They also testified, preached, and argued. In the crucial period leading up to John Wesley’s evangelical conversion at Aldersgate in May 1738, John Wesley seemed to spend most of his spare time losing arguments with Peter Böhler. They were the best arguments he ever lost. By the time Wesley had his experiential breakthrough at Aldersgate, he had already become convinced of the cogency of Luther’s message of justification by faith alone. Here is John Wesley’s own account:

In my return to England, January, 1738, being in imminent danger of death, and very uneasy on that account, I was strongly convinced that the cause of that uneasiness was unbelief, and that the gaining a true, living faith was the one thing needful for me. But still I fixed not this faith on its right object: I meant only faith in God, not faith in or through Christ. Again, I knew not that I was wholly void of this faith; but only thought I had not enough of it. So that when Peter Bohler, whom God prepared for me as soon as I came to London, affirmed of true faith in Christ, (which is but one,) that it had those two fruits inseparably attending it, “dominion over sin, and constant peace from a sense of forgiveness,” I was quite amazed, and looked upon it as a new gospel. If this was so, it was clear I had not faith. But I was not willing to be convinced of this. Therefore I disputed with all my might, and labored to prove that faith might be where these were not; especially where the sense of forgiveness was not: for all the scriptures relating to this, I had been long since taught to construe away, and to call all Presbyterians who spoke otherwise. Besides, I well saw no one could (in the nature of things) have such a sense of forgiveness, and not feel it. But I felt it not. If then there was no faith without this, all my pretensions to faith dropped at once.

12. When I met Peter Bohler again, he consented to put the dispute upon the issue which I desired, viz., Scripture and experience. I first consulted the Scripture. But when I set aside the glosses of men, and simply considered the words of God, comparing them together, endeavoring to illustrate the obscure by the plainer passages, I found they all made against me, and was forced to retreat to my last hold, “that experience would never agree with the literal interpretation of those scriptures. Nor could I, therefore, allow it to be true till I found some living witnesses of it.” He replied, “He could show me such at any time; if I desired it, the next day.” And accordingly the next day he came with three others, all of whom testified of their own personal experience that a true living faith in Christ is inseparable from a sense of pardon for all past, and freedom from all present sins. They added with one mouth, that this faith was the gift, the free gift of God, and that he would surely bestow it upon every soul who earnestly and perseveringly sought it. I was not thoroughly convinced, and by the grace of God I resolved to seek it unto the end: — 1. By absolutely renouncing all dependence, in whole or in part, upon my own works or righteousness, on which I had really grounded my hope of salvation, though I knew it not, from my youth up. 2. By adding to the constant use of all the other means of grace continual prayer for this very thing — justifying, saving faith; a full reliance on the blood of Christ shed for me; a trust in him as my Christ, as my sole justification, sanctification, and redemption.