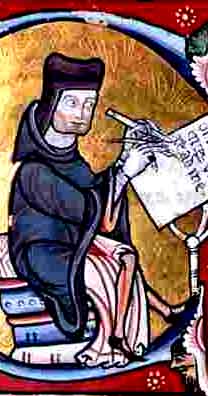 Peter Lombard (1100-1160) was a medieval theologian whose masterwork, The Sentences, was “the enduring classic, the standard introduction to systematic theology in the medieval university curriculum,” in the words of his biographer Marcia Colish. Colish even argues that systematic theology was a twelfth-century invention in a certain sense: While there was plenty of Bible interpretation, doctrinal arguing, catechizing, and summarizing of main points of doctrine, no Latin theologian before the twelfth century had “developed a full-scale theological system, with a place for everything and everything in its place.”

How important was Lombard? For the next several centuries, the way you learned theology was to comment on the Sentences. Thinkers from Aquinas to Luther got their start by coming to terms with the Master of the Sentences.

But the full text of Lombard’s Sentences haven’t been available in English translation for those of us who can’t read it in Latin. Enter Giulio Silano and the Pontifical Institute of Medieval Studies, who intend to publish paperback editions of all four books. Silano’s swell new translation of Book I, on the Trinity, is already available.

Lombard’s prologue is a perfect introduction to his work, and a classic reflection on the task of the theologian. Here it is in Silano’s translation:

Wishing, with the poor widow, to give something to the Lord’s treasury out of our penury and poverty, we have dared to scale the difficult heights and to undertake a work beyond our strength. We have grounded our confidence of completion and the reward for our labour in the Good Samaritan, who, after giving two silver pieces for the care of the man left half-dead, promised to repay all the expenses of the caregiver, who might have to spend more. The truthfulness of the one making that promise delights us, but the immensity of the work terrifies us; the desire to make progress spurs us on, but the weakness of failure discourages us, and only the zeal for the house of God overcomes it.

(The Latin and a more literal translation are online here) Lombard uses the image of giving two coins, but he uses the image two different ways. The first use is this: He, the living theologian, is like the poor widow who had almost nothing, but gave everything she had. Jesus commended her for this, and Lombard wants to be pleasing to the Lord by giving everything he’s got, even though it amounts to two cents worth of theology. He knows the mountain is too high and his strength is too small, but he undertakes “a work beyond our strength.”

Aside from the widow’s mitey example, Lombard is encouraged by two other coins: the two coins which the Good Samaritan gave the inn-keeper to pay for the care of the half-dead man (“semivivi” says the Latin) who had fallen among thieves. The Samaritan handed over those two coins, and then pledged his own good credit with a promise to pay whatever extra cost was involved. Lombard thinks of the Good Samaritan as God, and goes on to stake his confidence in the promise that these two coins were just a down-payment representing abundant resources.

That is where the little contemporary theologian gets his confidence. He puts in his two cents but doesn’t trust in those coins. Instead he trusts in the coins which are a promise that God will superintend his own work. “The truthfulness of the one making that promise delights us,” Lombard says. In fact, Lombard makes a tidy list of five elements that are present in the theologian’s mind as he takes up the theological task:

With these tensions working in his mind, the theologian sets out on his task, which, according to Lombard, includes defending the faith (“or rather, to show that it is already protected”), revealing the hidden depths of theological investigations, and conveying an understanding of the church’s mysteries.

At times, Lombard’s text is so dominated by quotations from the church fathers that it seems as if two cents is really all he’s giving. After the prologue, three quarters of the next fifty lines of text are taken from Augustine of Hippo and Hilary of Poitiers. But Lombard is no proof-texting quote-monger without his own independent grasp of Christian doctrine. He’s in there giving it all he’s got.

I look forward to working through the rest of Lombard’s Sentences, especially since I have the chance to do it with several other Biola faculty members this term in a discussion group.