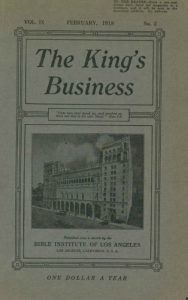 In the February 1918 issue of Biola’s magazine The King’s Business, editor-in-chief R. A. Torrey published a piece called “Evolution Discredited Again.” By 1918 it didn’t take much for Torrey to critique evolution: his science professors at Yale back in the 1870s had treated Darwinism as empirically weak and conceptually extravagant, and during his lifetime he had watched it rise to the level of dogma and turn against Christian presuppositions about reality. In particular, a kind of higher historicist synthesis of evolutionary thought had worked its way into Christian theology and Biblical criticism as it was argued in the most prestigious –and that meant the most Germanic– of the universities.

Torrey was above being merely anti-German: he recognized that as a form of bigotry, and editorialized against it when he saw it from other Christian writers. He had also spent a graduate year in Germany after his MDiv, and had too lively a recollection of the diversity of intellectual life there to lump everything together. But as he saw the leadership class of the German nation bend its vast resources toward militarism, he interpreted it as the obvious outcome of the godless philosophy that had become dominant in its universities. In a long editorial in February 1918 he connected the dots. He wrote, “The leaders among the German scientists and philosophers who have been advocating war, and a merciless war, and a war absolutely without moral restraint, have drawn their chief arguments for such a war from the evolutionary philosophy. For example, Friedrich Wilhelm Nietzsche…” and on he goes from there, sketching in broad outline an impressionistic set of connections between Nietzsche, evolutionary metaphysics, and the belligerence of the Kaiser. At one point, Torrey remarks that the author Vernon Kellogg “shows very clearly how German ruthlessness grows logically and necessarily out of the Neo-Darwinian theory.” Torrey is referring to Vernon Kellogg’s articles in The Atlantic, later published int eh book Headquarter Nights, which offered a behind-the-scenes look at how Germany military leaders thought and talked about their own beliefs and motivations.

The argument broadens out in various ways, but Torrey has a special grudge against a series of theologians and Bible scholars who have prepared the way for this German aggression in the war. Here the connections are tighter, because a number of highly influential theologians had the nerve to publish editorials in support of German aggression toward its neighbors. In fact, the epochal “Manifesto of the 93 Intellectuals” was published at the very beginning of the war. It was obviously the university arm of a coordinated national military plan, and a number of leading theologians and Bible scholars were happy to sign on to the ideological side of the war effort.

So on page 97 of the issue, Torrey segues into a new editorial entitled “German Philosophers and Scientists Discredited by the War.” Under this heading, he asserts that

What Germany had to say in Science, Philosophy, or Biblical Criticism was considered the final word, and ‘the consensus of German scholarship’ with many settled every question at issue. But the present war, and the utterances of the leading university professors of Germany regarding the war, have thoroughly discredited German methods of thought and German logic.

Torrey is well furnished with directly nationalist, militaristic, pro-Kaiser quotations from no less a figure than Adolf von Harnack: 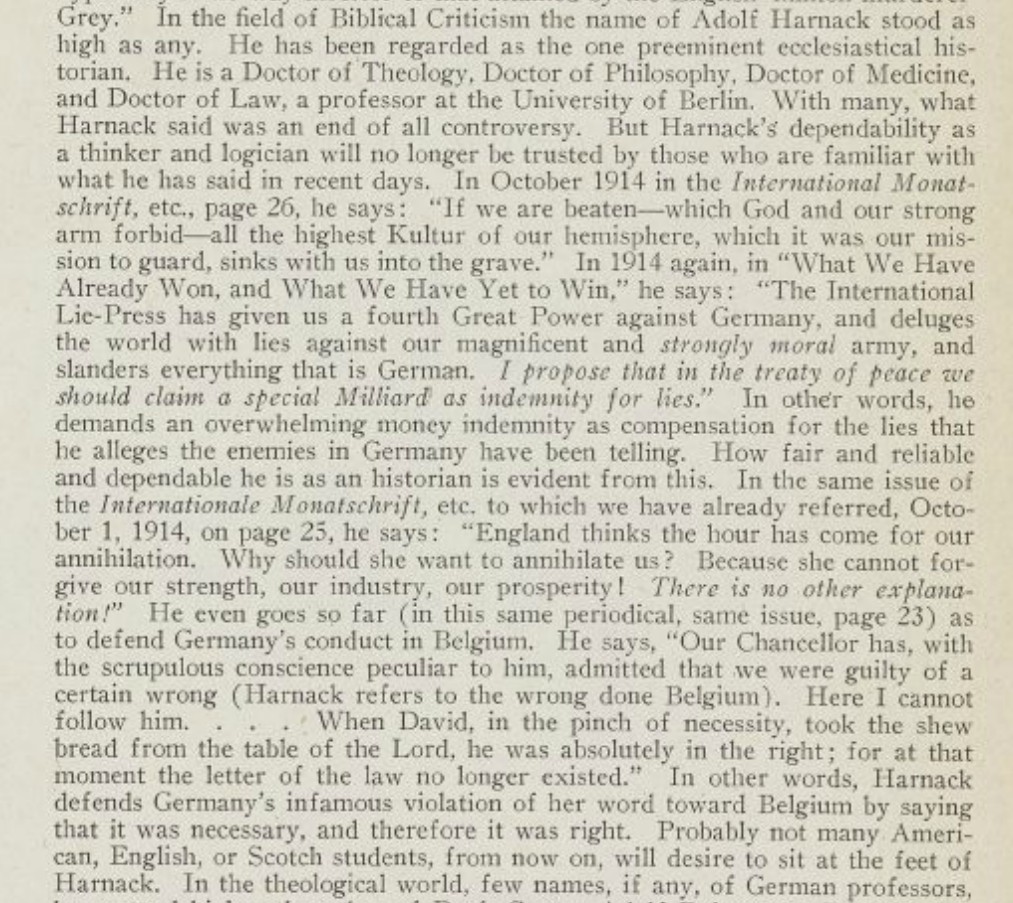 Also among the German theologians listed, Torrey finds Deissman and Friedrich Delitzsch, though on this last he cautions: “He must not be confused with his father, the great commentator, Franz Delitzsch, who was the beloved instructor of the writer of this article.” As he wraps up his series of disturbing quotations, Torrey says, rightly, that there are plenty more where those came from:

As I read Torrey’s February 1918 King’s Business editorial, I was reminded of someone thirty years  younger than R.A. Torey: Karl Barth.

The comparison is interesting. Torrey (1856-1928) was near the end of a long career as a minister. He had been around the world preaching in massive meetings on four continents, Moody-style but often with numbers surpassing even Moody’s. By 1918 he was six years into his term as dean of Biola, a position he had taken up so he could retire from the world-travelling aspect of his ministry and multiply his impact by training an army of laypeople in “personal work:” evangelism and discipleship in everyday life.

Karl Barth (1886-1968) began pastoring in his native Switzerland in 1911, fresh from seminary education in Germany. He only had a few post-seminary years in the pulpit before the world war broke out, and he was famously not ready for it. When the 1914 pro-war declaration of the 93 intellectuals came out, he was devastated:

For me it was almost worse than the violation of Belgian neutrality. And to my dismay, among the signatories I discovered the names of almost all my German teachers… It was like the twilight of the gods when I saw the reaction of Harnack, Herrmann, Rade, Eucken and company to the new situation…

(This is taken from Eberhard Busch’s Karl Barth: His Life from Letters and Autobiographical Texts, p. 81). What was he to make of the signatures of all his professors on such a document? “To me they seemed to have been hopelessly compromised by what I regarded as their failure in the face of the ideology of war.” If they could support this, Barth concluded, then “their exegetical and dogmatic presuppositions could not be in order.” In other words, even though he couldn’t quite tell what had been wrong with his theological education in high German liberalism, he was forced to affirm that everything must be upside down or inside out; the whole thing must be profoundly misdirected if it could come to this. Eventually (read all about it in Busch) he traced the problem all the way back from the late 19th century (Harnack and all his co-signing company) to the very dawn of the 19th century: Barth came to see Schleiermacher himself as steering modern theology on to a path that led almost necessarily to such abominations.

The story of how Barth and some other young theologians after the first world war came to discern a new path for European theology is a long one, and it takes place in a different world from R.A. Torrey’s editorials in the February 1918 issue of Biola’s King’s Business. Neo-Orthodoxy (to use the very outdated, even discredited, term for the movement Barth participated in) was not fundamentalism (to use the controversial term that would not yet solidify for almost a decade). The differences should be kept clearly in view to avoid any optical illusions suggesting that every course correction towards the Bible is the same thing. Barth, of course, would not have started out with “Evolution Discredited Again.” And Torrey would not have considered it earth-shaking or blasphemous to consider Schleiermacher a fountain of theological woes.

But R.A. Torrey and Karl Barth each recoiled instinctively when they read the manifesto of the 93 German intellectuals. Both were revolted to see the extent of the cultural captivity of high-placed Christian leaders in their times. For Barth it meant he would have to find his way, blindly at first, to something new. For Torrey it confirmed him in what he had been around the world teaching for decades, and it deepened his resistance to the liberal theological tradition. For both, in their own ways, it meant recommitting to hearing the word of God in Scripture alone.