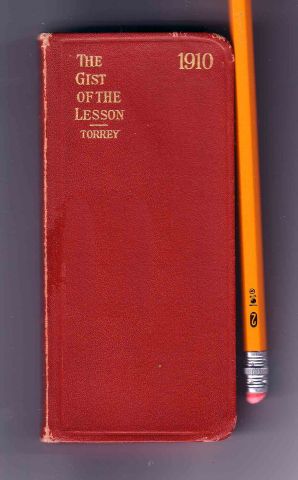 R. A. Torrey wrote dozens of books, oversaw academics at the two greatest Bible Institutes in America, and carried out a round-the-world preaching tour that made headlines in big cities on five continents. He was a busy man and he worked on a grand scale. But while serving as the international celebrity for evangelical Christianity, he also invested in training the non-celebrities, the vast numbers of ordinary Christians in the various churches. He took a personal interest in equipping Sunday School teachers to do their jobs effectively. The tool he used for this was The Gist of the Lesson.

The Gist of the Lesson was what Torrey called the series of little books he published annually from 1899 until his death in 1928. They were not just little, but impressively little: 3.5 x 5.5 inches, with rounded corners. 165 pages, 25 cents. The Gist was designed to fit into a vest pocket or purse pouch. It was tall and skinny, with rounded corners so the book wouldn’t snag as you slipped it back into your pocket. Imagine the audience Torrey must have been expecting to buy this book: Busy people who spend the whole week thinking about what they will teach at Sunday School, keeping an eye out for a spare minute during the work day when they can sneak a peek at a little book from a trusted authority who will stimulate their thinking about the Bible. If you knew you could count on people like that to be your audience, what would you say to them? 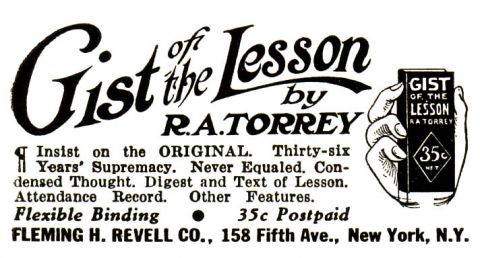 “To be able to be of any assistance to the many thousands throughout the English-speaking world who annually provide themselves with this “Gist of the Lessons” is indeed a great privilege,” said Torrey in his Introduction to the 1910 edition.

The purpose of this little book is to furnish busy men and women with the text of the Sunday school lessons and suggestive comments upon them in such a form that they can always carry them with them and thus improve spare moments on the train, street cars and elsewhere.

Torrey had that audience: a 1906 publisher’s ad for The Gist boasts”nearly fifty thousand copies sold annually.” In most English-speaking nations, the Protestant churches all followed a standard lesson schedule devised by an interdenominational committee. The International Standard Sunday School Lessons were published from some time in the 1870s on, and as a 1906 encyclopedia noted, the uniform lesson plan “has given rise to a literature, both permanent and periodical, that has widely popularized Bible study.” The Gist was Torrey’s contribution to that body of literature.

Torrey brought out the first edition of The Gist from his publisher Fleming Revell in 1899, and kept publishing it regularly right up until his death in 1928. After that 29-year run, the publisher kept printing The Gist by R. A. Torrey annually for some time (see for instance the above 1935 ad for the volume. I do not know if they recycled previously-published lessons or produced new material under the Torrey series name). 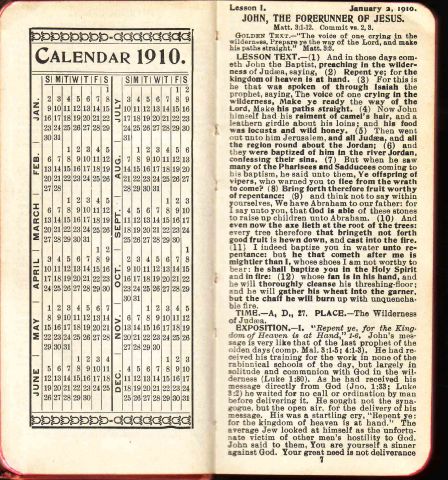 Inside the book, the text is just crammed onto the page. The margins are minimal. The sentences bump right into each other with no transitions, as Torrey warns: “condensation of thought, expression and form have been aimed at.”

Consequently oftentimes a single sentence covers a complete line of thought, and the following sentence has no close connection with it, but takes up a new line of thought. Each sentence therefore should be pondered by itself. It is hoped that the reader will frequently find food for much reflection in a single sentence. The aim is to suggest thoughts rather than to fully work them out. …the book is for study, not mere reading. It is a book of seed thoughts.

Of course every author would like readers to savor each sentence, “for study, not mere reading.” But Torrey could just as well have said “for working, not for reading,” because The Gist is obviously, in every way, in form and in content, a tool. It is a hand tool designed by one seasoned worker to help his apprentices get their jobs done independently and effectively. In literary terms, it is beneath the notice of scholarship. By those standards, The Gist almost doesn’t count as a book any more than a logarithm table would. 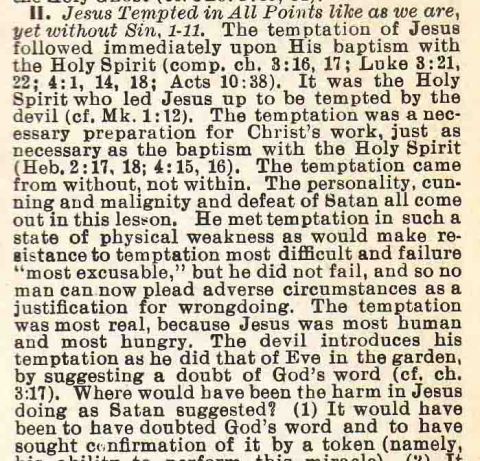 But once you get into the mentality of that paradigmatic nineteenth century evangelical, “the Christian worker,” you see The Gist as a well-made instrument for meditating on God’s word in preparation for teaching it to others.

The international standard lesson for January 2 is on John the Baptist and his prophecy that someone greater was coming to baptize with fire. What is this baptism with the Holy Ghost and fire? First, Dr. Torrey declares authoritatively, based on his examination of the Greek, that this is one baptism rather than two. The Sunday School teacher has been warned off of a possible grammatical misinterpretation that might have started a whole series of bad ideas. The Spirit’s work toward believers has the characteristics of fire: it reveals (I Cor 3:13), refines (Isa. 4:4), consumes scum (Ezek. 24:9-11), illuminates, and generates energy. “A baptism in ‘fire’ then reveals us to ourselves; consumes the filthiness and scum –the selfishness, ambition, worldliness and vileness that we have vainly contended against for years– out of us; makes us to burn and glow with love to God and man and truth, love for souls; fills us with heavenly energy.”

More than 4,500 pages of that, lined up on the shelf in witness to the real work of R. A. Torrey. The heavy things of history sink to the bottom.

I don’t know how Torrey made time to write The Gist for almost 30 years. It seems like the kind of work a superstar like R. A. Torrey would delegate. Surely lots of people are qualified to write the little vest-pocket book of seed thoughts for Sunday School teachers. How did he go from a high-profile revival tour, packing out the Royal Albert Hall for weeks on end, to thinking patiently through the Sunday School lesson with a mind toward helping those teachers teach? A story in Roger Martin’s Torrey biography R. A. Torrey: Apostle of Certainty, gives a hint. The story comes from an interview with his son, R. A. Torrey Jr. In his seventies, retired from BIOLA but still studying and writing every day, Torrey paused in his daily schedule. “Janet, noticing him rocking in his chair and looking through the window, teased him, “Doctor, you look mighty lazy.” He looked up, smiled and replied, “I am writing The Gist.” (p. 253) He was “improving spare moments,” to help those fifty thousand teachers do the same thing.