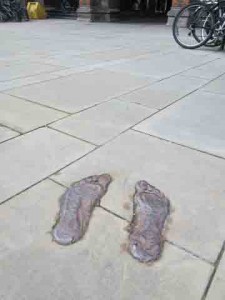 What good is a statue nobody can see?

In a courtyard in Cambridge, England (just beside the Sedgwick Museum of Earth Sciences) is a pair of iron footprints. Over the last few summers, I’ve seen these footprints dozens of times. I’ve wondered what they were pointing toward or away from, I’ve joked with my kids about them, I’ve stood toe to toe with them, I’ve noticed how different they look in dry and rainy weather.

They don’t really make much sense there. Just your atypical lumpy iron footprints in the corner of a paved courtyard among buildings. There are lots of signs nearby directing visitors to museum entrances, but none of the signs say anything about the footprints. So unassisted, my thoughts about these feet never got far.

Then while planning a trip, I came across a nifty online guide for following sculpture trails as you walk through Cambridge. And listed there was a sculpture called Earthbound: Plant by Antony Gormley, dated 2002. And a little picture of the feet.

Now despite having thought about the feet before, I didn’t really think the feet were all that visually interesting, and it seemed to me that the trail guide was scraping the bottom of the barrel to count this modest installation as outdoor sculpture. 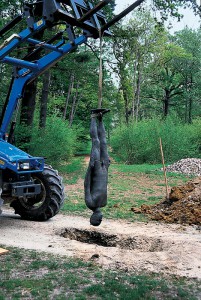 But here’s the trick: The sculpture isn’t just footprints, it’s actually the soles of the feet of  a full-size human figure, cast of iron and buried head-down beneath the pavement. All that’s showing is the soles.

At the artist’s website, you can see this picture of the statue’s installation at a previous site. And here’s somebody’s flickr feed of its burial in Cambridge, where it’s not so much permanently installed as it is “on loan.”

Upside down. Buried. With no signs telling anybody it’s there.

Now Gormley’s an interesting artist, and if you spend some time at his website you can see the sort of clever stuff he does sculpturally with the human form. Better yet, if you get to see some of his art in person (on a train to Scotland you’ll pass the massive Angel of the North), you get a sense of his fascination with dismantling and relocating the body in a way that implicates the viewer. And Earthbound: Plant accomplishes the same thing, inviting you to ponder just how far down into the ground this figure extends, and how tall the two of you are together when you stand on the figure’s soles. If you’ve got a mind well stocked with Gormley images, and if you recall what the buried one looks like, all sorts of connections and resonances bounce around in your mind.

But first you have to know it’s there, and nothing on site gives you the necessary information. Which is weird, and apparently intentional. The artist’s decision to withhold this information is crucial, because it changes the piece from visual or spatial piece of art to conceptual art. The concept is something like this: what if you had a piece of art in a public place, but nobody could see it and they walked past it over and over and over?

Well, that would be kind of neat. In ancient and medieval art, there was an ongoing debate among the craftsmen about whether you should bother to finish the carving on the backs of the heads of figures that were going to be placed high up on a temple, or backed into a niche. One side said, “No, the art is for visual effect, and nothing is added to the visual effect if you spend a dozen more hours carving the back of a marble head with curly hair that nobody will ever see.” But the other side said, “The gods will see it. Do your best work there.”

The iron footprints are all I see. But knowing there’s a human form under it adds much to the ideas I have when I walk over it. All the craftsmanship of a Gormley sculpture is under there, and who knows what else is under there where Earthbound: Plant is? It’s like a whole upside-down planet just under your feet.

Unless it’s a hoax and they’re really just iron footprints.