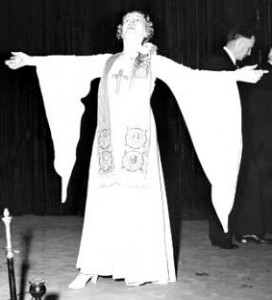 Today (Oct. 9) is the birthday of Aimee Semple McPherson (1890-1944), the bombastic and showy Pentecostal evangelist who made her mark on Los Angeles in the early decades of the twentieth century. At various times in my life, I’ve lived in the shadow of McPherson without knowing it: I grew up in a Foursquare church, though in my memory nobody ever spoke the name of Aimee there. And I teach at Biola, which was so alarmed by the explosive growth of her brand of sensational Pentecostalism in 1924 that the board of directors published a statement regarding “the widespread discussion concerning Divine healing, tongues and the baptism with the Holy Spirit, as evidenced by ‘McPhersonism’ and other extreme teachings.”

There’s not much need to inquire into why McPherson was such a celebrity, since everything she did was brilliantly calculated for public effect. She put on such a spectacle at the Angelus Temple that Charlie Chaplin came by regularly to learn what he could from a real entertainer. The lights, the music, the costumes, the motorcycles, the services centered on healing, the drama: what a show. A big part of her downfall was that when she lapsed into public scandal, there was no way to shake the attention, and the press, predictably, attacked. Her story has been told well in the last few years in a couple of books by Daniel Mark Epstein and Matthew Avery Sutton.

But here’s something about McPherson that is not often commented on: She had a mind that loved to put things into systematic order. Her most comprehensive book, This is That: Personal Experiences, Sermons, and Writings, is a bit of a rambling mess overall (as the subtitle suggests), but at numerous points she shows that she has a knack for pulling things together and suggesting organizing schemas. She provides diagrams, outlines, and handy sequential outlines. Check out this homespun chart of salvation history: 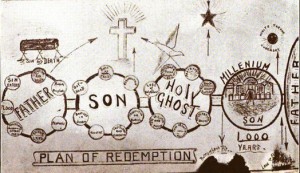 It’s clunky enough in execution, but it manages to combine a simple and familiar outline (the persons of the Trinity) with a number of places to hang more specific observations. It’s not hard to imagine this working well for a certain kind of Bible teaching.

And then there’ s this chart of the dispensation of the Holy Ghost, which I suppose would be a detailed view of one of the three circles represented on the previous diagram. 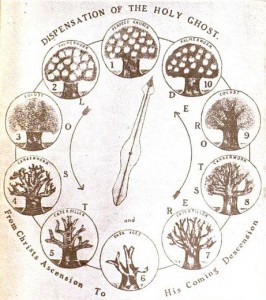 . This chart doesn’t have as much going for it in terms of immediate clarity. You have to lean in and read some fine print to figure out what’s going on at all. Unfortunately, Aimee claimed she saw this diagram in a vision, perhaps running the risk of attributing the clunky graphic design to higher powers. In This is That, she says “The following message was given under the inspiration of the Holy Ghost in London, England.” She tells the story of finding herself required to preach in front of a huge and intimidating crowd, and praying for divine help:

All this takes a long time to write, but it happened in a moment, for those who put their trust in God shall never be put to shame. My mouth opened, the Lord took control of my tongue, my lips and vocal organs, and began to speak through me, not in tongues, but in English. The Spirit spoke in prophecy, and as He spoke I did not know what the next word was to be.

Aimee used the three-dispensations schema for a quick summary of Biblical history:

When she expounded this third dispensation, though, it gave her room to move beyond biblical history and comment on the flow of church history. Her take on church history was restorationist with a capital R; the Spirit’s work had started strong in Acts but been buried by the middle ages. It began to revive with the Reformation, made strides with Wesley, jumped forward with William Booth, and is back in force with Pentecostalism. As Aimee spelled it out in the course of the message, we are nearing the end of the third dispensation, and eschatological realities are coming upon us soon.

This penchant for system was part of McPherson’s genius as a communicator: the charts and diagrams, the visions of structure, were not burdens that she put in front of her audiences, but were actually part of her appeal. Pentecostalism is a wild, and usually a sloppy thing. McPherson put just enough order into it to give it a boost and make it easier to communicate.

McPherson’s skills as a collector and systematizer have not been altogether overlooked. In Don Dayton’s book The Theological Roots of Pentecostalism, he rooted around in the pre-Pentecostal sources of nineteenth-century evangelicalism and found four threads that came together to constitute Pentecostalism: instant conversion, baptism in the Holy Spirit, divine healing, and the second coming of Christ.

McPherson nailed all of these. In fact, she took “the fourfold work of Christ” as savior, Spirit-baptizer, healer, and coming King as the basis of the church she started, and the reason it is called Foursquare.

She also put this kind of thing to music, as in the lyrics of her hymn “Preach the Foursquare Gospel.” Her songwriting is not exactly for the ages, but it helped people rehearse her doctrines, and it’s full of applause lines:

Foursquare we stand for the living word, For the word of God
Telling to all the story of Jesus, stem of Jesse’s rod
Man of sorrow and of grief, dying on the tree
Mighty Redeemer glorious Saviour, Jesus of Calvary

Unfurl your banners and forward go, Oh ye ransomed host
Trusting in Jesus Mighty Baptizer, With the Holy Ghost
Lion of Judah, King of kings, Lord of lords is he
Clothing His Church with power to witness, Leading to Victory

Catch up your shield oh ye living Church, Christ of Galilee
Bore all our sickness, carried our sorrows, Set the prisoners free
Lift the fallen, help the faint, dry the weeping eyes,
Come bring your sickness To thy physician, for He’s passing-by

Lift your eyes, then unto the hills. Lift your voice and sing
The cloud of heavens aflame with glory, greet the coming King
Swift as wings of eagle’s flight, Shall He come again
Clad in His glory, and robbed in honor, And with his saints shall reign.