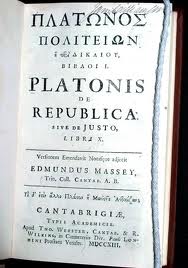 “This is intended to be a literal translation,” says Allan Bloom in the preface to his 1968 edition of Plato’s Republic. And it is, famously, or infamously, literal. Bloom puts his head down and digs out as word-for-word a translation as he can. What drove him to do so? He explains his motivation in the provocative introduction to his translation:

The translator should conceive of himself as a medium between a master whose depths he has not plumbed and an audience of potential students of that master who may be much better endowed than is the translator. His greatest vice is to believe he has adequately grasped the teaching of his author. (p. vii)

There is a drastic humility in this translation philosophy: Bloom knows that Plato is smarter than him, perhaps exponentially so. And he suspects that some of his readers or students may also be more perceptive than he is. So his job is to connect Plato to the students, as directly as possible. He serves, in other words: Before he can be magisterial in the classroom, he must be ministerial in the study. Only a minister can be a magister.

What does it look like to translate an author, excuse me, a master, whose final meaning you have not fathomed? Bloom’s translation is a marvel of clarity and thoughtfulness. But in that preface, he gives some examples of translators who take the opposite approach. He cites a Prof. Lee who argued that

The translator must go behind what Plato said and discover what he means, and if, for example, he says ‘examining the beautiful and the good’ must not hesitate to render this as ‘discussing moral values’ if that is in fact the way in which the same thought would be expressed today.

“But if one hurries too quickly ‘behind’ Plato’s speech,” warns Bloom, “one loses the sense of the surface.” The problem with such translators is “the assurance that they have a sufficient understanding of Plato’s meaning, and that that meaning is pretty much the kind of thing Englishmen or Americans already think” (p. ix).

This sets Bloom off on a (brilliant in its own right) short discussion of how “the good and the beautiful” have been handled since Aristotle, with a side glance at the emergence of terms like “moral values” and its treatment by Nietzsche. These things have genealogies; they are bits overheard from very different conversations. How could one possibly be a translation of the other? And furthermore,

even if ‘the beautiful and the good’ do add up to what we mean by morality, it is well that the student should know that for Plato morality is composed of two elements, one of which lends a certain splendor to it which is lacking in, say, Kantian morality. And it may also be the case that these two elements are not always wholly in harmony. The good or the just need not always be beautiful or noble, for example, punishment; and the beautiful or noble need not always be good or just, for example, Achilles’ wrath. There is further matter for reflection here; one might learn a great deal if one could follow such problems throughout Plato’s works. It is only in this way that a student might reconstruct a plausible and profound Platonic view of the world rather than find the dialogues a compendium of unconvincing platitudes.

That raises enough issues to keep an undergraduate seminar chattering until midterms. Why would you take a fascinating, sophisticated, bizarrely foreign, ancient text like the Republic, and turn it into “the kind of sentence one finds in newspaper editorials?” The answer, Bloom thinks, is that translators are tempted to do that kind of thing to render Plato immediately accessible to the contemporary mind. Their goal is apparently to clear out all the obstacles to understanding, and they take Plato’s unique vocabulary to be a mass of obstacles strewn in the pathway. But Bloom knows better: those are not obstacles, those are the stepping stones.

And here’s a Bloom thought-provoker: “Is it not conceivable that the Republic is a book meant for people who are going to read widely in it, and that it would be unfair to cheat them for the sake of the subjective satisfaction of those who pick out sentences aimlessly?”

Like so much in Bloom, like so much in any strand of the Straussian Great Books ideology, this idea sounds a lot like a secularization of a Biblical idea. If you weren’t familiar with apostolic authority, Bloom’s approach to Plato would be as close as you’d be likely to come. Similarly, if you didn’t have a doctrine of inspiration, Strauss’ notion of “logographic necessity” would get you fairly close. And if you didn’t have a canon of Scripture, you might compensate with a canon of Great Books.

But the argument also works the other way: Bloom was enough of a purist about what he was doing with Plato, that it seems to me that Bible translators and readers could learn a thing or two from his Republic about how to handle a text that is in every way above you.