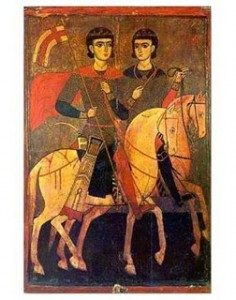 Today is the feast day of Sergius and Bacchus. When it comes to saints, I try not to underbelieve or overbelieve. And it’s a hard balance, sometimes. What do you with the story of Saint Sophia and her three daughters Faith, Hope, and Love? It’s entirely possible that these four women, supposedly martyrs in the early second century, existed, but it also sounds sort of made up from pious imagination. If they did exist, won’t I be embarrassed to meet them in glory and explain how I thought they were myths? But if they didn’t exist, don’t I look stupid pretending to believe in them based on very sketchy evidence?

Sergius and Bacchus are a special case in this regard. Did they exist? Probably. Do we know much about them? Well, that’s kind of a mess. They have been commemorated for so long, even architecturally, that it’s hard to banish them to fiction. On the other hand, their story is told so late, and so embellished with extraneous miracles and anachronisms, that I think we have to admit we don’t know much about them. So if you forced me to answer blunt questions about the truthiness of various saints, I’d say “no” on the Faith-Hope-Love sisters, but “yes” on Sergius and Bacchus, with the reservation that I can’t put a lot of confidence in the details of their story.

And here’s their story: They were soldiers in the Roman army under emperor Maximianus, in the first years of the fourth century, before the Edict of Milan made Christianity one of the empire’s permitted religions. Their Christian faith was discovered when they refused to sacrifice to Jupiter. Outraged, the emperor subjected them to humiliation, torture, and execution. Their last speech went like this:

We, O Emperor, are obliged to render to you earthly service of this corporal body; but we have a true and eternal king in heaven, Jesus the Son of God, who is the commander of our souls, our hope and our refuge of salvation. To him every day we offer a holy, living sacrifice, our thoughtful worship. We do not sacrifice to stones or wood, nor do we bow to them. Your gods have ears, but they do not hear the prayers of humans; just as they have noses but do not smell the sacrifice brought them, have mouths but do not speak, hands but do not feel, feet but do not walk. ‘They that make them,’ as the Scripture says, ‘are like unto them: so is every one that trusteth in them because Thou are with us.”

It probably happened a lot like that. And the church of the fourth century, trying to work out its complex relationship with a sort-of Christian empire, learned the habit of calling Sergius and Bacchus to mind. Their story is a valuable reminder of what one extreme form of the church-state relationship can look like.

There is a great church (well, mosque now) in Constantinople named for them. Its nickname is “the little Hagia Sophia,” because of architectural similarities to the big Hagia Sophia. Which is not, by the way, named after St. Sophia the martyr…