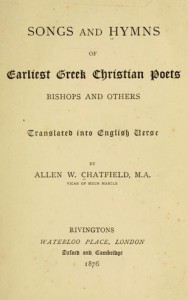 Slow day for church history? Yes indeed. The most interesting thing I could find that happened on October 2 is the birth of Allen W. Chatfield (1808-1896), the 19th-century Anglican vicar and translator of Greek hymns. Chatfield studied classics at Cambridge and then got ordained, so he was the man for the job of bringing the oldest Greek hymns into English for the church.

In 1872, Chatfield got hold of a big book of Greek hymns from centuries of church history, and fell in love with the earliest ones. He noticed that the further back you go in the history of Greek hymns, the more pure it gets: The less you find the praise of God mingled with Mariolatry and invocation of saints. Chatfield was irked by the development of the later hymns, especially the way every song in later centuries had to conclude with a Mary verse. It seemed to him that “as darkness and ignorance rapidly prevailed, so the worship of the Blessed Trinity is literally capped by the worship of the theotokos, the prayer or doxology to the Virgin in each case forming the grand climax.”

Chatfield also preferred the poetics of the earlier hymns, though you’d have to be pretty good with Greek to know why: “I was attracted to… the grand old Greek metres. To me they are vastly to be preferred to the later metrical or harmonious prose, or the mediaeval and modern jingle.” He thought that “the old metres can express sublime thought and divine truth,” y’know, like in the anacreontics and dactylics, or the hexameters and pentameters and iambics.

I’ll have to take his word for that, but here is a bit of what he came up with in The Songs and Hymns of the Earliest Greek Christian Poets. (Nice page photos of the old book are here).

Accept the music which I bring
Of holy melodies; for Thou
Art He to whom my soul doth bow,
God over all, God’s mighty Son,
The ever blest Immortal One!
The Eternal Father gave Thee birth;
Birth Thou hast given to heaven and earth.
All worlds are Thine; all nature Thine;
And wisdom infinite, divine.

Immovable of mind,
Of ways past mortal ken,
The boundless, undefined,
Wisdom’s deep origin,
Upholder of the heavenly towers,
Ruler of all created powers.

Thee, with the holy self-sprung Fount, we sing,
Who art from all eternity great King,
God and of God, immortal, glorious One,
Thee, only Father’s true and only Son!
To Thee, with Him, our praises all belong;
Thee will we crown with choicest flowers of song.
Son of the Father, Thou by birth Divine!
In Thee all bright the Father’s glories shine.
And from the Father and through Thee, behold!
The spirit issues–mystery threefold!