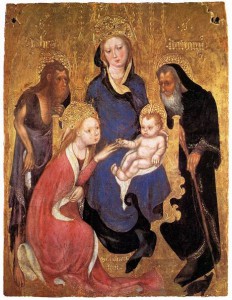 Today (April 29) is the day Catherine of Siena died in 1380. Catherine was a Dominican Tertiary, that is, not a nun, but a layperson so associated with monastic life that she participated in many ways, and wore the habit. The Roman Catholic Church has identified her as a saint (1461), as a patron saint of Italy (1940, sharing the honor with Francis), and as a Doctor of the Church (1970, along with Teresa of Avila).  The Catholic Church recognizes a great many saints, but only 33 figures have made it onto the list of Doctors of the Church. Catherine and Teresa were the first two women.

What did this teacher teach? She taught the Pope to move back to Rome, for one thing. She is credited with helping end the “Babylonian Captivity,” the awkward fourteenth-century interval of more than a half-dozen Popes ruling from Avignon, France.

Her teaching on the spiritual life, however, is what recommends her to the ages.  One admirer says of her,

The composition of the Siennese dyer’s daughter, whose will, purified and sublimated by prayer, imposed itself on popes and princes, is an almost unique specimen of what may be called ‘ecclesiastical’ mysticism; for its special value lies in the fact that from first to last it is nothing more than a mystical exposition of the creeds taught to every child in the Catholic poor-schools.

Indeed, the best sections of her Dialogues work because of their directness and simplicity. In an imagined dialogue with God the Father about discretion, she portrays God as saying to her:

I have made a Bridge of My Word, of My only-begotten Son, and this is the truth. I wish that you, My children, should know that the road was broken by the sin and disobedience of Adam, in such a way, that no one could arrive at Eternal Life… Look at the Bridge of My only-begotten Son, and see the greatness thereof, for it reaches from Heaven to earth, that is, that the earth of your humanity is joined to the greatness of the Deity thereby. I say then that this Bridge reaches from Heaven to earth, and constitutes the union which I have made with man.

Catherine goes on at some length with this image, developing the contrast between crossing the Bridge and attempting to swim the river, a bottomless river. She even spends some time describing those who try to jump back and forth between the bridge and the river. The charm lies in the way she combines the big, theological picture (God, man, incarnation, atonement) with insight into the spiritual life. One minute you want to draw a Campus Crusade diagram (I suspect there may actually be some Catherine influence on Bill Bright, mediated through great-books Baptist F.B. Meyer and the like), the next minute you thinking “Oh, that’s what Thomas Aquinas was getting at!” There is much good stuff in Catherine of Siena’s Dialogues.

Above, I said that Catherine wrote out an “imagined” dialogue with God the Father. That’s not quite fair to her claims. She dictated her Dialogues not as fictive works, but as reports of what she heard from God in mystical visions and encounters. I can hardly accept that, and I find I can only read them with profit if I approach them differently. Most evangelical Protestants will have to do likewise, using empathy and imagination to enter into the mental world of Catherine of Siena. It is a very Roman Catholic world of the middle ages, and it even tilts towards the sentimental, rural, Italian end of the Roman spectrum. Catherine is hailed as the Seraphic Virgin, Mystic of the Incarnate Word, and Mystic of the Mystical Body of Christ. She married Jesus in a vision, and he gave her an invisible wedding ring. She scourged herself and drank pus from the sick. She may have subsisted on nothing but communion wafers by the end of her life, claiming that all other food made her vomit. By later reports, she levitated. You can go to Siena and see her head in a reliquary, though her body is in Rome and one foot seems to be elsewhere. To read her is to go that deep into Roman Catholic territory, and you can hardly get five pages without some sort of stumbling block. Don’t read her if that stuff will ruin it for you. And if you do read her, don’t say I didn’t warn you.