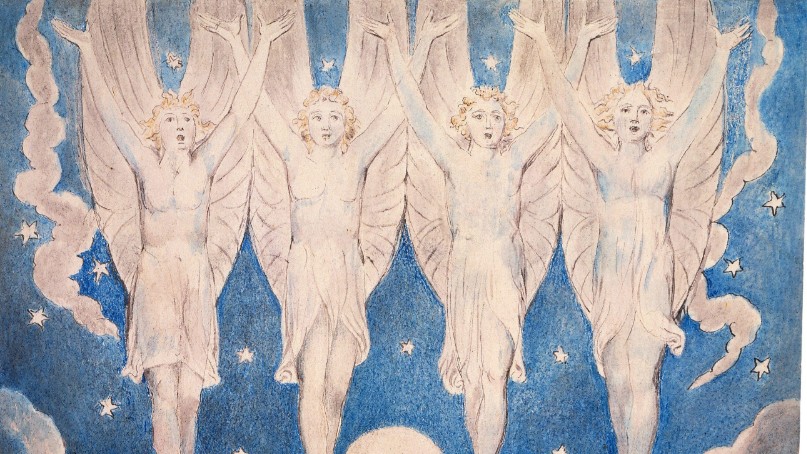 So I was in church and we were singing that nineteenth-century hymn “Angels from the Realms of Glory” and that one line “you who sang creation’s story now proclaim Messiah’s birth” got me thinking about how I’ve sometimes wondered who the implied speaker is in Genesis 1, because just saying “Moses” doesn’t account for the fact that he’s not an eye-witness or that the text doesn’t really do anything to identify the voice as Moses or ever tell any story about Moses getting this information, but then again just saying “God” doesn’t account for the narrator speaking in the third person about what the character he calls “God” is doing and that got me thinking about how Milton has an interesting solution when he has an angel come to Eden to tell Adam and Eve the story of where everything came from, and the angel (it’s Raphael, this is Paradise Lost book 7) basically opens his mouth and says “In the beginning,” etc. and I was thinking that angels are sneaky in the Bible in the sense that while the Old Testament doesn’t quite tell us that angels were involved in the giving of the law of Moses, the New Testament does three different times (Galatians, Acts, and Hebrews), so it’s a New Testament doctrine that angels were mediating the Old Testament and if angels were mediating “the Law of Moses” but doing so unobtrusively I wonder if they could also be mediating “the books of Moses” unobtrusively and maybe, just maybe, we could guess that the authorial voice of Genesis 1 is an angel who says “In the beginning, God created” and maybe that’s one sense in which they “sang creation’s story” if any of that is what the hymn-writer was thinking about.

Anyway if I had a little more sleep right now I might re-think this and see why it’s bad to say it or post it to a blog or even let my mind wander during church, or if I had less sleep and some spare time I might try to start a cult based on it but it wouldn’t be much of a cult because I would want everything else to be just normal Christian stuff but then you’d buy my book or join my cult and we’d tell you this extra-cool part that most people don’t “know” and then you’d go “ah yes, the angels, right,” and we’d kind of nod at each other knowingly and feel sorry for the masses who just don’t get it.

Okay, back to finals week grading.