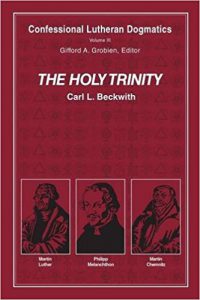 (The Holy Trinity is not 3 Lutherans, you jokers. That happens to be the series cover.)

My review of Carl Beckwith‘s 2016 book The Holy Trinity just appeared in the July 2017 issue of The International Journal of Systematic Theology.

It is a fantastic book, and I wanted to blog about it briefly to help spread the word to folks who may not see the review in IJST. Beckwith’s Holy Trinity deserves wide attention as a solid contribution to trinitarian theology.

Here are a few paragraphs of what I say in the review.

On the value of finally having this variety of confessional Lutheranism assert itself in contemporary trinitarian theology:

Beckwith’s task is to present an account of trinitarian theology that is distinctively Lutheran, but not so distinctive that it shows itself parochial or even sectarian. This is Trinitarianism of the great catholic tradition, carried out with resources to which all the churches should attend. Lutheran systematic theologians were of course major contributors to the revival of interest in the doctrine of the Trinity in modern theology: Pannenberg, Jenson and Jungel have been major figures, and it is striking that even Reformed theologians like Moltmann and Barth have more Luther than Calvin in their footnotes when talking about the Trinity. We might even hazard the generalization that where the modern discussion has been most revisionist (in parting ways from classical theism, for instance), the Lutheran influence has been most conspicuous. Beckwith brings in an altogether different sort of Lutheran Trinitarianism, one whose voice has not been prominent in the conversation in recent decades, but whose credentials are self-evident.

On the difference a trustworthy doctrine of revelation and scripture can make for the doctrine of the Trinity:

The most striking feature of Beckwith’s presentation of the doctrine of the Trinity is that it rests its case on a very conservative doctrine of Scripture. Beckwith identifies modern theology’s deepest problem as ‘the loss of faith in the historical reliability of the Scriptures, in the truth of the Bible as God’s Word, and in the providentially ordered language of faith’. Beckwith instead presupposes a unified canon of Scripture in which the triune author communicates verbally. He argues for a supernatural view of history in which God makes his presence known through a series of carefully designed interventions and manifestations; an economy of revelation and salvation as witnessed in a comprehensive, inspired text. The difference this doctrine of Scripture makes for the doctrine of the Trinity is evident throughout the book, from its main lines of argument to its modes of demonstration.

In this biblical section there is a running polemic against certain modes of modern historical criticism of the Bible, including the alleged distinction between functional and ontological Christologies. Beckwith also points out that modern historians of doctrine focus overmuch on the creedal results of patristic reflection, thereby distracting their own attention from the much more extensive exegetical deliberations of the Fathers. It is easier to read a short creed than a long commentary. But the cumulative effect of overlooking the role of scriptural commentary for the development of the doctrine of the Trinity has been catastrophic. These modern pathologies, and others like them, created a situation in which the Hellenization thesis seemed plausible to many and still refuses to die. Beckwith’s rehearsal and updating of seventeenth-century decisions is a protest against those modern presuppositions.

On the strengths of this tradition’s trinitarianism:

The readers most likely to benefit from this volume are those least familiar with the deep Lutheran resources Beckwith is working with. One sentence near the end of the book gives a glimpse of the richness and precision of these texts. Grappling with the difficult question of how much theology should attempt to say about the divine attributes ‘in themselves’, that is, abstracted from God’s works, Beckwith shows that his tradition has brilliantly identified the issues at stake, but has not succeeded in making a definitive statement. Having canvassed the options, he concludes that ‘we need the insights of Chemnitz’s order, Gerhard’s pastoral instincts, and Quenstedt’s thoroughness and rigor’. If we generalize from that remark, we can see what Carl Beckwith has aimed at in this entire book: the best of confessional Lutheranism’s orderly, pastoral and rigorous theology of the Trinity.

I’ve blogged before (here) about one of the most interesting details of the Lutheran transmission of Augustinian trinitarianism. I’m confident I’ll be referring to Beckwith’s Trinity book in the future as well. Beckwith has mastered his tradition well, and this generous volume is instructive on every page.