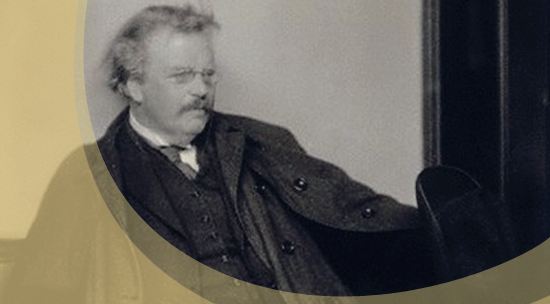 There was a sweet, confusing couple of years when the Inklings et al. suddenly spoke straight at me, with megaphones. All my bookish Christian friends felt it too, at one time or another. We felt like they were pointing out our intellectual thirsts by quenching them. We felt like they had looked at our little journals to inspire their seventy-year-old books. How does that happen?

Take Chesterton. A love and assessment of absolutely anything just rolls off his quick red tongue with really baffling clarity. I don’t know another author similarly capable of transforming the most convoluted machinations of scientists, philosophers, or maniacs into bits of dissipated laughing gas, while simultaneously praising a crumb of cheese to the point that one wants to, I don’t know, venerate it or something. It’s incredible.

And, frankly, it wasn’t very good for me as an aspiring writer. I remember one week in particular: Sunday, I had written a list of five things I could blog about. By Saturday, and without trying, I had read Chesterton or Lewis saying exactly the five things I had planned to, with a notable addition: brilliance.

When I wanted to say that the power of art comes from its limits, or that virtue yields horror as well as happiness, or that reasonings are foundationless without faith in reason, I found Chesterton had swooped in first. Or Lewis, or Williams, or, say, Hopkins. I didn’t blog.

It was a dampening realization: The things I want to say are hardly new, and I can barely hope to say them better than those old crusty saints did. Why re-say? It’s been said. The wheel, reinvention, etc.

It may or may not have been Samuel Johnson who declared it useless to write any heroic couplets, since Alexander Pope had perfected them.  In any case, someone did.  The idea is simple: the best things scorn more of their kind.  Once the sonnet is perfected, the sonnet is dead…or frozen, at least.  Greatness garrotes its imitations.

The problem with that idea, if you’ll pardon the pertness, Mr. Johnson (or whoever), is that it’s ridiculous. If greatness is sterile, then, I don’t know, sheep are smart and beauty is dull.  No. There are more poets because Homer sang, and more scientists because of Einstein. What if Chesterton has said everything already, and said it better than I ever will? Still (ahem) for God’s sake and his, it follows from the nature of things that I should sit down and say it again as best as I can. His awesomeness shouldn’t stop my writing; it should accompany it.

Let’s say that good ol’ corpulent Chesty and I are standing side-by-side, contemplating the mysteries of the universe, when Wham! we realize the same marvelous realization. I could a) crumple up and defer to him, or we could, you know, b) party together. Mutually enthuse. I could add my voice to his, or my photo to Callahan’s, or my painting to Giotto’s, or my movie to Malick’s. Not because I’m as good as they are (ha!), but because creativity’s a spectacularly fitting response to the joy of apprehension. And who knows? I hear that people improve at art by persistently producing.

For me and, I think, for many others, almost the only thing that gets in way of making devoted imitations of the best paintings or essays is a conviction that we, or our self-presentations, must be exclusively excellent. As if we were gods. For heaven’s sake, let’s present, present, and re-present the truth, and let the truth be full of games. Let’s play “Chesterton” like we used to play “House,” “Pet and Owner,” or soccer. Or let’s play “Art is Composed of Limits” with Chesterton and do it as exuberantly, boisterously, and beautifully as we can, with a good, old-fashioned American belly laugh thrown in to boot.

This isn’t a cheap shot at excellence. By all means, write and create as well as you know how. But it is, I hope, a true shot at a bad reason for not creating.

By the way, (of course) Chesterton said all this too. Odd, but he seemed to think that he was saying what had been said forever and saying it worse than the last guy. I think that may just be the way things are for any member of the religion that’s older than time, and who follows a God with whose glory the earth is filled.

When I can’t say something better than Chesty has, I think I have all the more reason to say it. I’ll say it exactly because he said it so well, and made me like it so much more. If I can’t be the best, first I’ll thank God that I’m not, and then I’ll simply say and do what the best have done, but worse! After all, I’m an image maker and an image, a smaller thing that follows the Greatest. My being less than He is doesn’t exempt me from acting like Him. On the contrary. Praise God for my limits. By His strength, may I work well, work hard, and work cheerfully to fill them.