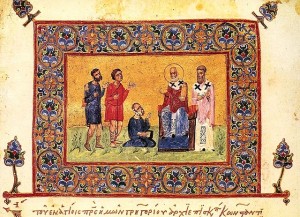 In the year 381, the second ecumenical council (also known as the First Council of Constantinople, or Constantinople I, to distinguish it from two later councils in the same city), met to make decisions on Christian doctrine and order.

The main thing the fathers of the first Council of Constantinople would want us to say about their work is that they re-affirmed the Council of Nicaea. That’s what they came together to do, and it was something that needed doing. Although the anti-Arian cause had prevailed decisively in the first ecumenical council in 325, the middle decades of the fourth century saw the imperial church dominated by Arianism and various forms of semi-Arianism. By 381, however, the Nicene or Athanasian party had regained control, and this council convened by emperor Theodosius I made its first order of business to re-assert the creed from the Council of Nicaea.

The biggest change they made to the creed from Nicaea was to extend the article about the Holy Spirit: In 325 the bishops had merely noted, “and [we believe] in the Holy Spirit.” But in 381 they added the wonderful language calling the Spirit “the Lord and giver of life, who proceeds from the Father, who with the Father and the Son is worshiped and glorified, who has spoken through the prophets.”

That language makes it clear that the Spirit is God, is ranked with the Father and the Son but is another person in distinction from them, and is one of the Trinity. But why didn’t the bishops assembled there use the word “homoousios” to assert the deity of the Spirit? Gregory of Nazianzus, who chaired the council for part of the time, argued that they should do so. But the consensus view was that the deity of the Spirit should be confessed in different terms. The inescapable fact that the Spirit is of one essence with the Father is not stated in those terms here. A longer ending was also added to the creed to make it a more comprehensive statement of faith quite comparable with the Apostle’s Creed.

Constantinople I also tightened up the Nicene terminology. The creed of 325 had included an anathema against all who teach that “the Son of God is of a different hypostasis or ousia” from the Father, obviously thinking of hypostasis and ousia as indicating the same reality. By 381, however, thinkers like the Cappadocian fathers had seen more clearly that a word like hypostasis should be reserved for referring to what there are three of in God. It almost doesn’t matter what terms you end up using, but you really need to be able to state that God is one something and three somebodies, and keep your terms straight. It is the faith of Nicaea as revised and extended in the creed of 381 that we commonly call today the Nicene Creed (because who wants to say “the Niceno-Constantinopolitan Creed of 381?).

Aside from this and the extended pneumatological article, plus an anathema against those “fighters against the Spirit,” the Pneumatomachians, did Constantinople I teaching anything new? It did take a stand against a new heresy, Apollinarianism, which was in some ways a kind of opposite error from Arianism. Apollinarius of Laodicea was a theologian who, beginning with the thought of the eternal Logos who is consubstantial with God the Father, described the incarnation as the Logos operating the physical body of Jesus. The human nature of Jesus Christ, on the Apollinarian account, was only a human body with no rational soul. Where you and I have rational souls, Jesus Christ had the eternal Logos. This “God in a bod” christology has the obvious defect of recognizing the full deity of Christ at the expense of his full humanity.

Apollinarianism was anathematized in the first canon of the council. Against Apollinarianism, the fathers of Constantinople had to confess the full humanity of Christ in a new, clear, and soteriologically relevant way. Behind the rejection of Apollinarianism was a vision of salvation represented by the soteriological axiom: “What is not assumed is not healed.” This axiom, articulated by Gregory of Nazianzus, presupposes that the Son of God saved humanity by “taking on” or “assuming” human nature into union with himself. Everything in human nature needs to be saved, so everything must be taken into union with Christ. In this light, if Christ had no human soul, the human soul is left unredeemed. It is worth noting the way Constantinople I argues for a scriptural teaching by using a new line of argument not directly advanced by the Bible itself.

Taken together, Nicaea I and Constantinople I establish, using new terms and new lines of argument, the full divinity and the full humanity of Christ. In both cases, the councils do this not as a speculative exercise, but under the guidance of soteriological axioms that trace the logic of redemption in Christ: God alone can save us, and what is not assumed is not healed. Already with the first two councils we have the full vertical reach of salvation, from God above all the way to humanity below. To say this much is already to say that Christ is of one essence with the Father by nature, and condescends to become of one essence with humanity by grace. He therefore, this one person, has both essences. Here in the fourth century, two-natures christology has begun to emerge in the argument over salvation at these first two councils, though without the clarifying terminology that Chalcedon will bring. After Constantinople I, the ultimate terms of divinity and humanity are no longer in dispute. All parties in the churches from now on will agree to them, and the question can shift to the way God and humanity meet in Christ, or, more formally, the way in which the deity and humanity of Christ are related.

If you want to fit Constantinople I into a bigger picture of doctrinal development, you have two options. On the one hand, you can emphasize the anti-Apollinarian decision, and say that as Nicaea had asserted the deity of Christ, Constantinople asserts the humanity of Christ. Add them up and you have Jesus, divine and human. That is roughly the way I presented it above.

I think both aspects need to be retained if we are to have a chance of grasping what the fathers of Constantinople were up to. Was 381 more important for christology, pneumatology, or trinitarianism? However the people involved would have described what was at issue (“our holy faith”), it seems to me that they were contending for that great central truth of Christian doctrine which includes, irreducibly, Trinity, incarnation, and atonement, in primordial interconnection. To tease the elements apart may be helpful for instructional reasons, but we need to remember that they belong together, and emerged simultaneously in the actual history of doctrine.