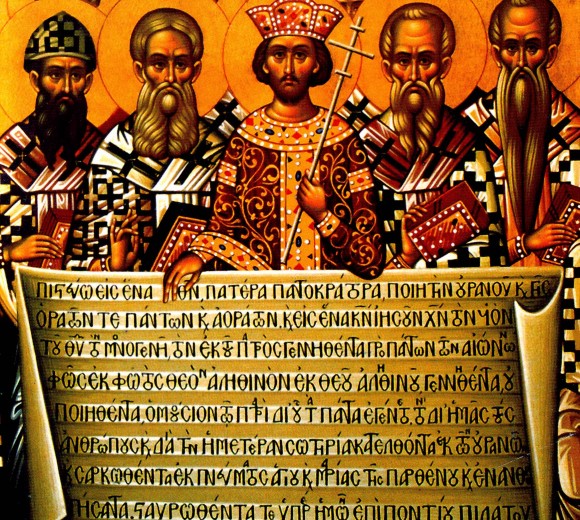 The first ecumenical council was Nicaea, in the year 325. As all the later councils are at pains to attest, the Council of Nicaea is the most important of all the councils.

The heresy which provoked this epochal council was Arianism, the teaching that the pre-existent Logos who took on flesh in the incarnation was not God, but a great and exalted creature. Since he was the Son of God, Arius argued, he must have come into existence from non-existence, and prior to that he must not have existed. The Arian Christ is certainly a supernatural being, but just as certainly he is not actually divine.

Arianism was rejected by the 318 bishops gathered at Nicaea under emperor Constantine. Because Arius and his supporters were capable of making most scriptural language agree with their doctrine, the orthodox party pressed the extra-biblical term “homoousios” into service, meaning by it that the Son of God is of the same (homo) substance (ousia) as God the Father, or consubstantial with him. The goal of the Nicene theologians (both the bishops present and the rising generation which included the great Athanasius of Alexandria) was to assert the complete deity of Jesus Christ in a clear and unequivocal way, which they did by placing this term into the creed which was produced at this council, calling Christ “the Son of God, begotten from the Father, only begotten, that is, from the substance of the Father, God from God, light from light, true God from true God, begotten not made, of one substance (homoousios) with the Father…”

Lying behind this undertaking was a vision of what salvation entails: personal reconciliation with God and participation in God’s own life. With that view of soteriology in place, the implicit soteriological axiom driving Nicaea and the entire conciliar theological tradition downstream from it is: God alone can save.