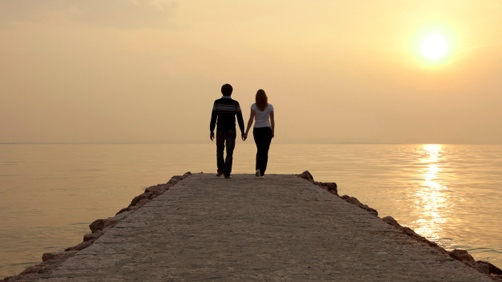 I spend most of my time working with undergraduate students, directing them academically through the Torrey Honors Institute or offering life and/or pastoral advice as they learn to navigate the oftentimes difficult and uncertain terrain of adulthood. I love what I do and I would not trade it for any other job. What I have noticed, however, in the nearly eight years that I have been teaching at Biola University and working with these undergraduates is that they tend to overthink certain areas of their life and none more so than romantic relationships. As I recently talked with one of my students about some relationship advice that she overheard me give when we were traveling together in Italy she said, “You should write a blog about this.” So, I am. Many who follow the “I Kissed Dating Goodbye” train will not like what I have to say nor will those who choose to think of romantic relationships only in terms of courtship as opposed to dating. But keeping in mind that I work with exceptionally heady students I offer the following advice.

I had not been working at Biola long when I heard the letters DTR mentioned in conversation. I had no idea what they stood for nor did I really care to know. Occasionally I would hear a student say something like, “Oh, they had a DTR last night and are no longer together.” Or, “They had a DTR and now they’re dating.” From comments like these I came to learn that whatever DTR meant it had something to do with relationships. After hearing about these DTRs multiple times I finally asked a student, “What does DTR mean?” It elicited quite a response – something between embarrassment and amusement. Come to find out, DTR means “Define the Relationship.” It’s the conversation that students have that makes or breaks a relationship. Now mind you, the relationship could still be in its infancy, just getting off the ground and the DTR in this context decides if it will go any further. In other cases the relationship could be two or three years old and might be getting to a point where the couple either gets engaged or decides to call it off. This conversation would also qualify as a DTR. If one person in a relationship decides that he/she wants to end of the relationship then they have to initiate a DTR, which leaves the other person wondering “what just happened.” Simply put a DTR is any conversation between two interested parties that either makes or breaks a relationship. Figuring this out made me feel that I had cracked some sort of a code, getting a better understanding of an undergraduate college student’s mind.

Since then, however, I have learned that DTRs are really just lame excuses for overly intellectual students to avoid having to respond to their emotions. Whatever happened to the days when a young man and a young woman met one another, fell in like, fell in love and then got married? Whatever happened to “attraction” and why is everything reduced to a thought project? I’ve been happily married nearly nineteen years and, obviously, that’s the romantic relationship that I know the best. And, if I may humbly say, I also think that it has been a healthy and wholesome relationship since the day that we met. And, believe it or not, we never had a DTR or the equivalent of a DTR. This is how things happened:

August ’92– We were introduced to one another in a hallway at college. A common friend thought that we might have something in common since I am from Virginia and my wife had just lived in my hometown for the past two years. A few days later we had a great two hour or so discussion. Talking with her was really easy. We began to hang out in the same friend circle.

September ’92 – I knew that I was in like so I invited Christina on a date. I was terribly nervous, she was not. A couple of weeks later I asked her out again. She said yes. Two dates down and I was still in like. I paid for both the dates so that there would be no confusion that these were dates.

Early October ’92 – Because I liked her I sent her flowers. I knew that she would love them and I wanted her to know that I liked her a lot. She loved the flowers. Our times together changed. Our conversations were deeper and we sought out each other’s presence. She was in like too.

Late October ’92 – While on fall break from school we had an opportunity to spend time with one another. We spent a day together where she introduced me to some of her friends from outside our college. By now it was clear that we were on the brink of a dating relationship. Late that same night we started dating. No one asked, “So, should we start dating?” We knew we liked each other and that was enough. In fact, by now we knew that we loved one another. Our times together had been sufficient enough and our conversations significant enough for us to say this to one another. Again, neither of us asked, “So, are we in love?” We knew we were so we said so.

September ’93 – We got engaged. We knew that the main purpose of our dating was to determine if we wanted to marry one another. What would have been the point otherwise? So no one asked, “Should we get married?” We knew that we loved one another and we knew that the next step after dating is engagement.

July ’94 – We got married. There was no need to discuss if we should get married since that is the point of engagement. Again, there was no “Should we…” discussion. We met, we liked, and we loved, so we married.

So, what’s the point of all of this? Well, I just wanted to emphasize again that my wife and I never had a DTR. We showed each other where we were at in our friendship, dating relationship, engagement and ultimately marriage with our actions. We did not find a bench in the park and talk ourselves blue in the face, we let our relationship develop naturally and as it progressed we adapted ourselves to the new stages, expressing our like and love in words and actions. When I thought she looked beautiful, I told her. When I wanted to show her that I loved her, we went somewhere nice or I gave her a gift. When I wanted the campus to know that I was in love with her, I wrote it in large letters and put it in my dorm window (true story). What I never did was schedule a DTR.

My advice to college students today (or at least the ones that I work with) is to quit thinking so much. Relationships are really not rocket science, especially if you believe that God made us to be relational people. If you see a guy or girl that you think is attractive, introduce yourself. If you meet someone who you think is interesting, tell them so. If you find yourself in like, show them. If you fall in love, proclaim it. If you want to date, ask them. If you want to get engaged, get on your knee.

Thus, to all of my students, let’s put an end to DTRs and get back to the basics!