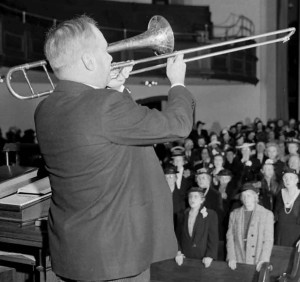 Homer Rodeheaver (1880-1955) was born today, October 4. He started out as the songleader for William Biederwolf, but rose to fame when he accompanied Billy Sunday on preaching tours. The role of song-leader for a big-name evangelist was well-defined by the time “Rodie” stepped into it: Moody had his Sankey, Torrey had his Charles Alexander, and Sunday had Rodie.

Homer Rodeheaver stands out for several reasons: he was intentionally more entertaining than the Sankeys and Alexanders of the previous eras. He had very clear ideas about using not-especially-religious songs to warm up an audience and help them transition into the religious music. Life magazine did a profile on him right after World War II, emphasizing how he was relentlessly cheerful and could get anybody to sing. He played a loud instrument, the trombone, and he played it loud. Homer’s big idea seemed to be that if you wanted to cut through the noise of modern life, you had to make a lot of noise, distinctive noise, loud noise. It was a battle of drown-out or be-drowned-out, and Homer Rodeheaver rose to the challenge. That might not be the best strategy after all, but it was a good match for the style of Billy Sunday (“The Baseball Evangelist”). His music was actually a little bit less sentimental than the songs of the previous generation, but more zippy.

Rodeheaver was also some kind of marketing genius, pioneering in new media back when new media meant records. Ads from his publishing and supplies company were omnipresent in evangelical magazines from the early 20th century. He bought the rights to “The Old Rugged Cross” and made it a signature song for some time.

Listen to his gripping voice, in a duet with frequent collaborator Virginia Asher, here, singing “In the Garden.”