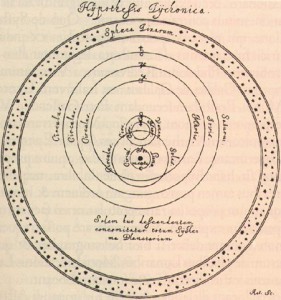 Today (December 14) is the birthday of Tycho Brahe (1546-1601). Who, you ask? Tycho! Lord of the Island of Hven! Builder of the Uraniborg! Captain of the paths of the planets at the turning of the ages!

Brahe was a Danish astronomer who made precise and systematic measurements of celestial motions in the crucial years when the Ptolemaic system was breaking down, and Copernicanism had not yet proven its case for a fully heliocentric system. Tycho’s brilliant half-way step was to say that the earth was the center of the system, the sun went around the earth, and all the other planets went around the sun as it went around the earth.

Tycho had solid reasons of a purely astronomical sort: If Copernicus was right, passengers on a moving earth should have beheld more dizzying motion paths in the stars, but we don’t. Or at least we didn’t back then. No sixteenth-century instruments could register the kind of observations that would establish the Copernican theory against Brahe’s modified post-Ptolemaism.

Tycho was the man of the hour, with a system that took the decisive modern step beyond Ptolemy (assimilating those loopy and epicyclic planetary motions) but fit better with common sense that Copernicus. Tychonianism let you believe your eyes when you saw the disc of the sun cross the sky. You could say “the sun came up,” and really mean it. And you could do it as a modern person who knew that the other planets revolved around the sun.

A lot has changed since Tycho Brahe’s day. Once astronomers figured out just how far away the stars are, they modified their expectations about what kind of variations we could expect to see in them from our revolving earth, and Copernicanism settled into its explanatory groove.

But here’s the weird bit: Tychonianism is sort of unfalsifiable anyway. If the whole (solar) system is in motion around larger (galactic) systems that are in motion around (etc.), then the earth might as well be the center anyway. For that matter, you could make Pluto the center of the universe if you wanted to, just for revenge against the 21st century Pluto-haters. Put your finger down on any point in the night sky and call it the center: everything spins around it, or spins around something that spins around it, or arcs outward from it in one direction or another. The charts get complex, but eventually it all smooths out.