I’m no Bible Answer Man or anything, but I get a lot of questions around Easter time.

How can God be unchanging if the Son became Jesus?

What happened to the Trinity while the Son was dead?

How could God the Father and God the Son be divided on the cross?

How can you say God doesn’t suffer if Jesus is God and he suffered?

There’s no such thing as a bad question, as teachers are supposed to say (and I mostly believe it). But there are complex questions, complex in the precise sense that their presuppositions are already so fully-loaded that the question can’t be answered until the presuppositions are made explicit, and, if necessary, rejected. These are the questions that bring out the pedant¹ in the professor, because they usually require some background.

The most interesting questions that arise as we contemplate the death and resurrection of Jesus are questions that require a couple of steps back. In particular, when somebody asks a hard question about what happened at the cross or the empty tomb, the question itself usually shows what they are presupposing about the incarnation itself. A mistake about the incarnation may go unnoticed at Christmas, only to play havoc with your understanding of Good Friday and Easter.

Here’s what I mean: When the Word became flesh, it was really the Word, and he continued to be the Word even in the flesh. If you are in the habit of thinking “become” means that something starts out in one state, but then undergoes a series of changes during which it ceases to be what it was and instead turns into the new thing that it wasn’t before but now is, you’ll have to give up that idea of becoming, in this case.

What would it even mean to say that God became human if by “became” we meant “stopped being God and turned into man instead?” When the impossibility of such a thing occurs to people, they sometimes want to solve the problem by referring to the Trinity: maybe, they say, only one third of God stopped being God and turned into man? But it doesn’t take much reflection to see what a disaster that is, and to admit that the Son of God is not one third of God. Other people punt to timelessness and try to account for God’s changy-not-changy shenanigans by saying it’s always what it is. This move is neither clear, effective, nor necessary. What’s really going on is that “became” doesn’t mean what we took it to mean. Fix that misunderstanding and there’s no need to let the confusion spread like gangrene.

When the Son of God became human, he did so not by ceasing to be divine and transforming into human. Instead, “without ceasing to be what he was, he became what he was not,” as Gregory Nazianzen said (Epistle 101). The Son of God took human nature into union with his own person; he assumed it and added it to himself.

We call this addition of human nature the hypostatic union, where “hypostatic” means personal and points out that this person, the eternal Son, having always had the divine nature, appropriated to himself a human nature all his own.

When the Word became flesh, he didn’t morph from a to z. In fact, when the Son of God came to earth, he didn’t leave heaven behind and stop being there in order to be here. As Athanasius says, “he was not enclosed in the body, nor was he in the body but not elsewhere.” He stayed everywhere and added a special human locatedness to it; the everywhere is what must be true for his divine nature, and the human locatedness is what must be true for his human nature.

On the other hand, when the Word became flesh, the Son of God wasn’t looking down from the ramparts of heaven at a human Jesus far below that he moved around like a puppeteer would. The entire human nature may be thought of as a special kind of instrument wielded by the Word, but it’s wielded from within as something that is as much his as your human nature is yours. Notice, by the way, that at all times we are talking about the entire human nature, not just the physical body.

You might say it this way: It’s no good thinking of the Son as departing from heaven and landing on earth, morphing from God to man on the journey. That assumes that the divine nature turned into the human nature. But it’s also no good thinking of the Son as operating a Mr. Jesus device by remote control from his distant control center in heaven. One is too close; the other too far. The first option would say goodbye to the Word, turning it into someone Jesus used to be. The second option would never make it all the way to the flesh, settling instead for a fleshy automaton. In neither case would you have the Word becoming flesh in the Christian sense. We need the real Word, really becoming real flesh: the Son of God as both fully God and fully human. 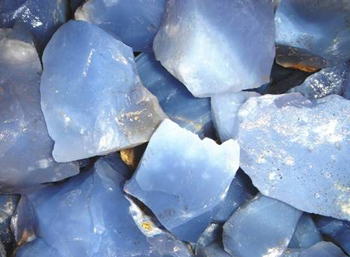 Chalcedony: It’s a pretty rock, and it’s also how your incarnational theology should be.

What I’ve just described, in pretty basic terms, is the first few steps in the classic Chalcedonian theology of the incarnation. The theology of Chalcedon warns us to avoid thinking of the divine nature morphing into the human, and also to make sure we don’t think of the two as independent or only externally related. They are distinct but united in the person of the Son. Chalcedon confesses faith in

one and the same Christ, Son, Lord, only-begotten, acknowledged in two natures which undergo no confusion, no change, no division, no separation; at no point was the difference between the natures taken away through the union, but rather the property of both natures is preserved and comes together into a single person and a single subsistent being.

Once you’ve got these guidelines in place, the questions that come to mind at the foot of the cross begin to make sense: God in his divine nature abides unchanging, undying, unsuffering, in the unity of the Father and the Son in the Spirit. God the Son has that divine nature, which did not turn into his human nature nor remain aloof from his human nature.

The astonishing thing that is announced at Christmas and becomes conspicuous at the cross is that God the Son has added to himself a complete, real, personal human nature. It’s his as much as yours is yours. And in that nature he, the eternal Son, experiences growth, suffering, death, and alienation, not to have a new kind of adventure but in order to put on our situation and save us in it.

The hypostatic union means that he is always himself, is really God and really becomes really human. The two natures never merge and never diverge. In them he works out human reconciliation with God. He is neither too far from our situation to help us, nor too close to our situation to save us. He is at exactly the right distance.

¹A pedant is one who conspicuously displays his knowledge, especially in cases where the knowledge doesn’t especially need to be displayed.

Hey, as long as we’re down here in footnote land, did you  notice that the title of this post is fantastic? I mean, it’s really, really good. I didn’t write it. I swiped it from Cynthia Rigby’s 1998 dissertation on incarnational theology (and Barth and feminism) at Princeton Seminary.