In April 2013 Biola held its third annual Imagination Summit. It was an in-house event this year, organized for faculty by faculty, to stimulate creative thinking about how to teach a generation of students who are, as “digital ethnographer” Michael Wesch argues, significantly different from the faculty. Even the youngest professor teaching in 2013 grew up in a partially analog world of technology. And though we may have successfully immigrated to the digital age, the students we’re teaching now are “digital natives” who have always had access to the capabilities of web 2.0, mobile whatnot, and streaming this-n-that.  For the big, institutional picture, we heard from our president, Barry Corey, who described how Biola will position itself strategically in the immediate future (hint: we’re not ignoring online delivery of course content, but we’re not tearing down any brick and mortar classrooms either).
I gave a 30-minute talk at the beginning of the day to set the discussion of tech and teaching into a wider context, suggested by the conference’s name: imagination.
My undergraduate degree is in art (drawing and printmaking), and since switching to theology I’ve done a lot of thinking about the imagination in an interdisciplinary way. Giving this talk was an opportunity to share a little bit of that, and of course to say more about cartoons than I usually get to. Calvin and Hobbes, Ernie Bushmiller’s Nancy, Scott McCloud. Also ducks, lots of ducks. When my kids asked me what I was speaking on that day, I told them “ducks.” 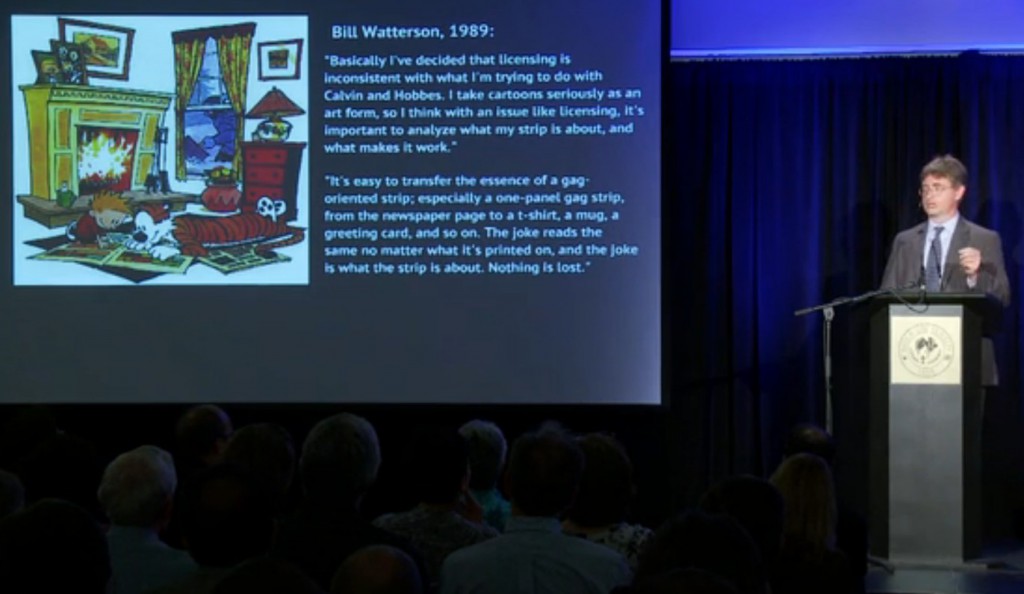 But here’s the main point I wanted to make at the imagination summit: When you get right down to what is happening in most acts of imagination, you’ll find some form of association. Imagination brings disparate things into contact and then presents them to the attentive mind as mutually implicated in each other. The basic grammar of imagination takes the form, “this means that.”

For communicators of any kind (but especially for teachers), the powers of association need to be focused on one particular task: associating the content you have to teach with the optimal form. I illustrate this by analogy to the visual arts. If an artist has an idea (“duck”),  he or she should scroll through the various media in which it could be expressed (painting, drawing, woodcut, sculpture, performance, etc). When the content lines up with the appropriate form, great things can happen.

An age like ours, with rapid technological change and new gadgets all the time, offers the opportunity to consider new forms for the old content. Teachers are prone to cramming every idea into a few comfortable forms: lecture on it, test on it, move on to the next thing. So in the final part of the talk, I tossed out, as a non-expert and not especially a technophile, a few remarks on how some of the easier tools could fit into a teaching life.

I didn’t realize the event was being filmed for posterity, but today I found the video on Biola’s big free resource site, open.biola.edu, so I figured I’d post it. Here is the video, and here is the accompanying Prezi.