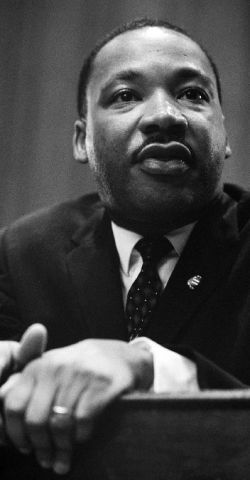 John Piper has the right idea about Martin Luther King Day: Don’t Waste It. In a timely memo, Piper exhorted all pastors and teachers who read his blog to “take note of the day and speak a word of exhortation to your people concerning their hearts in matters of race and ethnicity. … None of us is without need for help in the purification of our hearts in the way we feel and think about other ethnic groups. Your people need help.”

Why does Piper need to go out of his way (as he has done before) to encourage people to let the meaning of MLK day seep into their minds and hearts? The main reason is that the kind of pastors who care what John Piper thinks –conservative, Bible-based, largely reformed– are just irritated and distracted by Martin Luther King, Jr, the man, the theologian, the activist. They want to applaud civil rights and racial reconciliation, but when they look to King they see moral failings, academic plagiarism, naïveté about communism, and a theological position that denies far too much essential gospel truth.

Piper knows all this, and he calmly but firmly exhorts the kind of people who will listen to an exhortation from John Piper: “The point of this weekend is not to celebrate all that MLK was. You need not belabor his sins. The point is to lift up some magnificent things he stood for and some necessary and amazing achievements of the civil rights era in which he was a key leader. We are Christians and can see these things in the light of providence and the gospel. Let everything point to Christ and him crucified. Consider Revelation 5:9 if you wonder whether ethnic diversity and ethnic harmony are Jesus-blood issues.” Wake up, guys, you can hear him saying. Don’t obsess about only fellowshipping with the doctrinally pure on a day when you’ve got a chance to say something about a pressing issue. Don’t be stupid about this, we could stand to use every day we can get to hammer down the barriers that are still up.

The fact is that Martin Luther King, Jr. was a theologian (PhD in Systematic Theology, 1955 from Boston University), and he belonged to a theological tradition that is liberal. “Liberal” isn’t just a swear word, even if it describes a position that errs from the truth. American liberal theology is a tradition with a recognizable intellectual profile, a family of institutions and major figures, and recently, its own movement historian: Gary Dorrien has written a massive 3-volume history of the movement that runs from 1805-2005. In a short article about the finished trilogy, Dorrien characterizes liberal theology this way:

In my three-volume work, The Making of American Liberal Theology, I define liberal theology primarily by its original character as an attempt to create a progressive Christian alternative to established orthodoxies and a rising tide of rationalistic deism and atheism. Fundamentally, liberal theology is the idea of a Christian perspective based on reason and experience, not external authority, that reconceptualizes the meaning of Christianity in the light of modern knowledge and ethical values. It is reformist in spirit and substance, not revolutionary. Specifically it is defined by its openness to the verdicts of modern intellectual inquiry, especially historical criticism and the natural sciences; its commitment to the authority of individual reason and experience; its conception of Christianity as an ethical way of life; its advocacy of moral concepts of atonement or reconciliation; and its commitments to make Christianity credible and socially relevant to contemporary people.

That’s a fair, and even attractive, description of a style of theologizing that I think ends up being disastrous. Everything J. Gresham Machen said about it is on target: considered as a system, it seems to be a different religion from historic Christian orthodoxy. Different idea of revelation, different account of God, different idea of the human predicament, different vision of salvation, and so on. No wonder the tag “liberal theology,” in the mouths of more conservative thinkers, passes so rapidly from a term of description to a term of abuse. Once liberal theology progresses to specifying what it denies about the Bible, it denies almost everything I’m into the Bible for in the first place.

And Martin Luther King, Jr. was a theologian and pastor in that tradition. He went to all the right schools, studied with all the right people, and wrote about all the right issues to mark him as intentionally liberal. Dorrien does an excellent job in about twenty pages of his third volume situating King in the liberal tradition. By the time he went to college, he had already given up so much of his religious upbringing that he could be startled by a Bible class that helped him see that “behind the legends and myths of the Book were man profound truths which one could not escape.” In seminary he studied a book on the philosophy of religion whose author emphasized religious experience, and King reflected, “How I long now for that religious experience which Dr. Brightman so cogently speaks of throughout his book. … As I reflect on the matter, however, I do remember moments that I have been awe awakened; there have been times that I have been carried out of myself by something greater than myself and to that something I gave myself. Has this great something been God? Maybe after all I have been religious for a number of years, and am now only becoming aware of it.” This, from a pastor enrolling in a PhD program, is disconcerting to evangelical sensibilities.

Dorrien also documents an intriguing battle among the interpreters of King’s theological development. When King told the story of his own mental growth, he emphasized the established schools where he studied, and the white academic theologians who he read. The major turning points in his intellectual life, according to King’s autobiographical accounts, were academic events beginning in college. But another set of interpreters argue that when King described his development this way, he was under-selling the formative influence of his black church upbringing. Partly he did this to earn greater credibility with a mainstream audience that respected earned degrees more than churchly involvement, and partly because the ideas in the books were more in the foreground of his mind than the religious resources of his background. But the result is that there are two things going on any time Martin Luther King made a public argument: the voice of the historic black church is speaking through a theological mind trained in liberal academia. Both are authentically present, and in King’s work they can’t be isolated from each other.

In a 1984 article, black theologian James Cone argued that you can tell what really mattered to King by attending to where he drew strength when his struggle looked most hopeless:

In moments of crisis when despair was about to destroy the possibility of making a new future for the poor, King turned to the faith contained in the tradition of the black church. Whether one speaks of Montgomery, Albany, Birmingham, Selma, or Chicago, the crises arising from his struggle to implement justice never produced despair in his theological and political consciousness. The reason is not found in his intellectual grasp and exposition of white liberal theology but in the faith and life of the black church. With the resources of this religious tradition, he had a foundation that could sustain him in his struggle for justice.

I’m not trying to split MLK down the middle and claim that the good half belongs to the church folk. His liberalism wasn’t just a false consciousness superimposed on a conservative evangelical core: he really meant all that liberal stuff. But the presence of so much traditional Christianity in King’s speeches and activism is equally palpable. Dorrien documents how King critically sifted his sources like Tillich, Niebuhr, Wieman, and even Gandhi, finding that none of them had a strong enough sense of something he knew by experience was true: that no matter how sinful people were, the Spirit could renew them and redeem them and make a difference for the better. That wasn’t in his sources, it was something he brought with him from his upbringing, and it guided his studies from afar. MLK’s liberalism was of the personalist variety rather than an abstract metaphysical sort: people mattered more than ideas. Even in his dissertation on Tillich, King held out for a God who was personal in a thicker sense than Tillich’s theology permitted. And his liberalism wasn’t the tired old FOGBOM optimism of the nineteenth century: the happily progressive “Fatherhood of God and Brotherhood of Man” ideology hadn’t considered personal and institutional sin seriously enough to work after the two world wars and the tenacious racism of postwar America.

But mainly, MLK saw a big issue coming his way and knew to lean into it rather than avoiding it. From a conservative theological perspective, I could always wish he had received better teaching, and hadn’t felt the need to deny so much of what God has revealed about himself in his word. But I can also thank God that MLK had such a good grasp of a few crucial elements of Christianity: a personal God, the depth of sin, the possibility of transforming civic life. Compared to the fullness of a more robustly biblical variety of Christianity, what’s left for liberal theology doesn’t seem like much. It doesn’t seem like enough to build anything on. But see what Martin Luther King Jr. did with it! As Piper says, seeing it isn’t hard: “All you have to do to find some good word from MLK is Google his name.” Whatever he may have felt he had to give up from the fullness of the Christian faith, there’s still so much residual force left that it’s in every line of every speech. He did something with what he had. And since there’s still something to be done, MLK is still a resource. Don’t waste his words, his arguments, or his day.