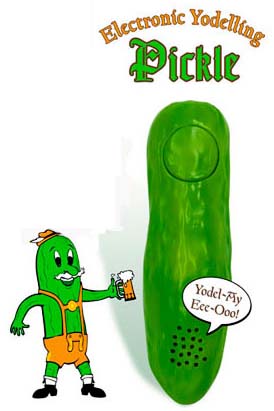 At the beginning of January I got to preach at Grace Fellowship Church in Costa Mesa, CA. The sermon was on First Corinthians 2 and entitled “The Deep Things of God.” For the next few days, I’ll be posting sections of the sermon text as individual meditations. Today’s post is the silly part. I’ve always wanted to say “rubber upchuck” during a sermon, and this was my big chance.

It’s January 6, so you’ve probably noticed that new toys don’t stay new. Last year around Christmas time —that is, Christmas 2006, which I suppose is now TWO Christmases ago—I tried to help my then 4-year old daughter and 6-year old son understand how the newness wears off of toys. At that time, my son Freddy was absolutely convinced that the next set of train toys from Playmobil would be the toys to end all toys, and that if he could only get those trains he would never get tired of them or want anything else. He had the picture of them from the catalog. We call this devotional reading material in our house, which you study and pore over and ponder what it would be like to own these things. You may have your own devotional materials that you go over in a similar way. He was certain that these were the toys that would truly and fully satisfy.

From my position of superior parental wisdom, I talked him through the process. “Remember your last brand new toy?”

“Remember your high hopes for it, and how special it was when you got it? Remember how you couldn’t keep your eyes off it, and loved playing with it?”

“Ahhh, yes, exactly. See the point I’m making here? And by analogy with your last toy, can you see how your next toy is going to follow the same arc from passionate dedication, intoxication with its novelty, to just another toy? Can you see how it has this magical quality of novelty which promises so much more than it can ever deliver? Don’t let it fool you. That newness or nextness that toy has is not a permanent feature; it is always falling off into yesterday as fast as you get it, faster than we can imagine. There’s a deceitfulness about novelty.

So, um, are we getting the toy or not?

Yeah, we’ll probably get it. But as a parent, I wanted to try to teach that lesson as early as possible, because it’s something you need to know at 5, at 15, at 45, at 55, and beyond. Of course, as adults, you and I continue to deal with this phenomenon of phantom novelty flitting from one thing to the next; we just deal with it at much higher, much more sophisticated levels than young people could ever imagine.

Once you’re grown up, you’ve mastered this tricky phenomenon so thoroughly that advertisers couldn’t possibly exploit it. I have such a clear grasp of how this works with toys, but I have a massive blind spot when it comes to the fact that the exact same thing applies to books. I’m always pretty confident that the next new book is going to be the one. Movies always seem so promising when I see the trailers for them, and they’re usually not so good. I should probably just watch the trailers and skip the movies; often that was the three minutes I wanted to see anyway, and the expectation that the movie is going to be good is better than the ninety minute film anyway.

Our toys are so much more sophisticated than anything children could understand… some of our toys aren’t even physical objects.

We want something, we become enchanted with it and imagine how great it will be to have this new thing. But as soon as it comes into our possession, it’s got a shelf life or a half-life that is unbelievably short. It begins to decay immediately; it seems to lose a bit of its luster as soon you get it. New toys don’t stay new.

If you’ve ever had a new car, or even a new-to-you car that was like new, you may have imposed rules like “No One Can Eat French Fries In My Car.” You know how that works, especially if you’ve got kids, you dictate “No one is allowed to drink any liquid except pure, clear water in this vehicle… no food products, certainly no french fries.” Well, that’s not reasonable, people eat french fries in cars, there’s a whole industry devoted to getting you french fries to take in your car with you to eat. How long are you going to impose these standards? The answer is, of course, “Only until the new wears off. As long as it feels new, we’re not going to eat french fries. In this car.” Well, how long does that take?

In fact, in our culture, what’s more tediously out of date than novelty? Presidential primaries just started this week, and already we’re sick of the candidates we’ve got available to us. We’re so early in the process, and already there’s nobody left to vote for. Can’t we get some new candidates? And every last one of them claims to be the candidate whose election would bring CHANGE. They’re selling the sizzle of the new. It’s hard to believe we’ll fall for it, but we will.

News isn’t new, even though by its etymology it’s supposed to be. “Old news” is a contradiction in terms, yet 90% of the news is anything but newsworthy, eminently predictable. I could get an unopened newspaper and tell you its contents like Johnny Carson’s psychic envelope routine: I predict… politicians are attacking each other. I predict there is instability in the middle east. “Wow! How does he do that?”

Even though we fall for it every time; doesn’t it eventually make you jaded and cynical? Don’t you get sick of novelty? Is there anything more predictable and humdrum than novelty?

In fact, think about that word for newness, the fancy word “Novelty.” We don’t use the word much anymore, except for in the plural form: “Novelties.” Novelties are those weird little knick knacks, gag gifts or stocking-stuffers (to use the seasonally correct term) that don’t fit into any other category (“What is it? It’s a novelty!”), the kind of things you find in Magic shops, or at that weird Spencer’s Gifts store in the mall, or the amazing Archie McPhee catalog.

*Wind-up walking sushi
*Rubber Chicken Noisemaker
*Pirate eye-patch shaped like a heart (is that romantic? Is that adventurous? I don’t know what that is)
*Little rubber duckies dressed like the devil

—whatever magic quality these objects have, I wouldn’t have described it as novelty. Oddity, yes. Novelty?

Note that some of these “novelties” aren’t novel at all:

*Magic 8-Ball? How is that new?
*That tippy red glass bird that dips its nose in the water
*Wax lips
—And how is a *Lava lamp a novelty when it’s copyright 1968? By west coast standards, that makes it an antique!

At this point, even I have forgotten where I was going with all this. The title of the sermon is “the deep things of God” and I haven’t gotten to that yet. I’m already sick of this sermon and ready for the next one; somewhere between the cute kid stories and the list of novelty gag items the newness wore off of this sermon and it became a tedious thing. That’s just how fast newness goes!

But I did come here today to talk about newness, about novelty. I want to try to explain what’s “new” about the New Testament, what’s “new” about the New Covenant, what’s News in the Good News. I want us all to be fully alert to the deceptiveness of novelty in all human affairs, as we turn our attention to this divine affair, this good news, this new covenant, New Testament that God has made known in his perfect word.