Brain-talk is everywhere these days. And while I love a good functional MRI as much as the next citizen, lately I’ve become alert to the way all of this brain-and-neuron rhetoric functions. It has a conjuring power, giving an aura of sciencey power to absolutely any topic. Reporters still bug their eyes out of their head and say “literally” a lot when they deploy the neuroscience terminology. I picture journalists in particular as having a big bucket marked “brain words” that they reach into for sprinkling on every story:

Today a dog bit a man; experts say the dog’s neural pathways were literally re-wired as the part of the cortex known to be associated with cat-chasing was activated. The man’s mental circuitry responded by reinforcing the chemical activity in the lobe that processes pain.

There is also an incantatory tone of voice when the words of power are spoken: brain and circuitry and wiring and neurons and pathways… aaah. When enough of them are spoken, Brain is invoked and comes among us to put us in touch with reality itself. And I can’t shake the feeling that it’s degrading our intellectual atmosphere, making us stupider.

Maybe I’m just cranky, though, so let me shift out of curmudgeonly diatribe mode and try saying this in a more acceptable idiom.

In a 2008 paper published in the Journal of Cognitive Neuroscience, Weisberg et. al. argued that “irrelevant neuroscience information in an explanation of a psychological phenomenon may interfere with people’s abilities to critically consider the underlying logic of this explanation.”

The mere presence of “logically irrelevant neuroscience information” affected the nonexperts’ ability to identify bad arguments. It’s not as extreme as getting someone to agree that “two time two is five because your cerebral cortex is phosphorescing,” but it’s kind of like that. Take away the phosphorescing cerebral cortex and the participants spot the bad argument. But add the brain-goo back in and you’ve got instant “seductive allure.” 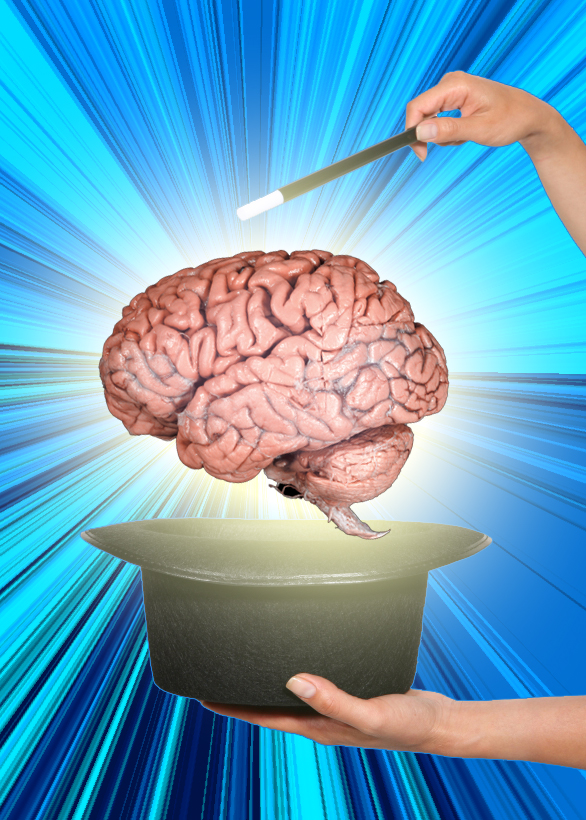 These researchers actually had that metaphorical salt-shaker full of brain words. They inserted the phrases “brain scans indicate” and “the frontal lobe brain circuitry known to be involved in self-knowledge” into bad explanations and rendered them better.

In the conclusion of the paper, the authors let themselves speculate a little more about the possible meaning of their experiment. It could be, they muse, that “people seeking explanations may be biased to look for a simple
reductionist structure.” In our age, we have become accustomed to having complex things broken down into basic building blocks, preferably mechanistic blocks related by predictable processes. We feel explained to when we hear that kind of explanation. And “because the neuroscience explanations in the current study shared this general format of reducing psychological phenomena to their lower-level neuroscientific counterparts, participants may have jumped to the conclusion that the neuroscience information provided them with a physical explanation for a behavioral phenomenon.”

Possibly part of the seductive allure is the apparent reductionism of brain talk; it feeds a need, satisfies a hunger for reductionism that we have developed. The authors go on:

The mere mention of a lower level of analysis may have made the bad behavioral explanations seem connected to a larger explanatory system, and hence more insightful. If this is the case, other types of logically irrelevant information that tap into a general reductionist framework could encourage people to judge a wide variety of poor explanations as satisfying.

The neuroscience talk apparently “causes subjects to lose their grip on their normally well-functioning judgment processes.” But even more important, according to the authors, is the fact that “neuroscience information happens to represent the intersection of a variety of properties that can conspire together to impair judgment.”

They conclude that scientists ought to be very careful how they deploy neuroscience information, since the public apparently has a hunger for mechanistic reduction and is ready to swallow anything, even if it is documentably irrelevant to the matters at hand. “Neuroscience research has the potential to change our views of personal responsibility, legal regulation, education, and even the nature of the self.”

I think it’s definitely happening right under our noses, and it’s journalists, pundits, entertainers, and the chatterati who are doing it. This is in fact the golden age of brain research, but by the time the experts actually explain their research to us, our culture will already have decided what we want it to mean, and have fit it into our mythscape.