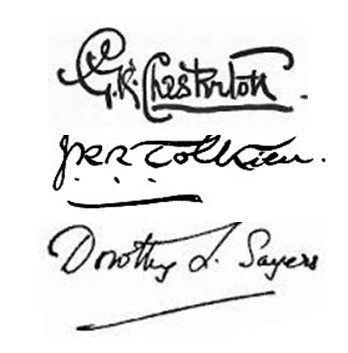 This past semester, four profs from the Torrey Honors Institute presented brief lunch talks for Biola faculty on some authors who are role models in thinking about the world in a way that is fully informed by their Christian commitments. These authors (G.K. Chesterton, J.R.R. Tolkien, and Dorothy L. Sayers, and C.S. Lewis) are all popularly grouped under the name of Inklings, though technically only Tolkien and Lewis belonged to that group of authors who met at the Oxford pub to read drafts and drink draughts.

Thanks to Rick Langer and Biola’s Office of Faith and Learning (who organized the series) the talks were recorded and are now available here. Each talk is about half an hour long, with some time for questions from the audience.

Unfortunately the fourth talk in the series, by Paul Spears on C. S. Lewis’ Abolition of Man, was not recorded.