Imagine a world where slavery is still a normal part of our daily lives. What if the North under Abraham Lincoln’s presidency assented to the demands of the Southern states and allowed for both the continuation of slavery and the creation of new slave states? If Lincoln was the kind of man who was moved by the pressure of public opinion it certainly could have been the case. Thankfully, his principled decision-making drove his presidency. 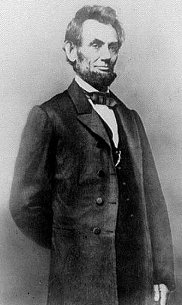 In the presidential election of 1860 Lincoln was only elected with 39% of the popular vote. He wasn’t even on the ballot in nine of the Southern states. This certainly wasn’t a popular mandate, but Lincoln did not need a mandate from the electorate for him to move to eliminate the “cancer” of slavery from the United States.

By 1862 the campaign against the Confederate States was going badly, and yet Lincoln realized that he must prosecute this war not just for the preservation of the Union, but because all humans should be free. He decided that regardless of the tenuous political situation he was in he was going to move forward on his Presidential proclamation of Emancipation. Opposition newspapers reacted by saying his decision to sign the proclamation was unconstitutional, and that it was “a wicked, atrocious, and revolting deed.”

Abraham Lincoln was a man of deeply held convictions, but it is these convictions that almost keep him from getting elected to a second term. In 1864 most people thought that Abraham Lincoln would not be reelected. The North was exhausted from the unrelenting call for new soldiers and supplies. Most of the battles fought between the North and Confederacy in the early parts of the war resulted in dramatic losses for the North, and even the North’s victories were not properly seized upon by the military leaders.

By the end of the war over 600,000 men had been lost by the North and South combined. By the end of his first term in office (1864) many within the North were ready to compromise with the Confederacy.

It was the courage of his convictions that kept him from relenting to the pressures of the congress, the oppositional newspapers, and public opinion regarding the conduct and goals of the war. He had decided that the war was not just about the preservation of the union (as some in the North believed), but about the abolition of slavery. Lincoln would not reconsider his position. He stated, “I am a slow walker, but I never walk backward.”

Lincoln’s beliefs developed out of a life characterized by careful reflection. Early in his adult life he came to realize the immorality of slavery. He stated, “If slavery is not wrong, nothing is wrong. I cannot remember when I did not so think, and feel.” While it is clear today that slavery is an evil that will not be tolerated in Lincoln’s day opinion was divided about the morality of slavery.

Lincoln believed that the Union could not continue unless all people were free. Lincoln believed that government was responsible to protect the freedom of all people. In one of his famous debates with Stephen A. Douglas he stated, “Slavery is an unqualified evil to the Negro, to the white man, to the soil, and to the state.”

In our modern political climate governmental officials do not make decisions because of personal convictions, but because of opinion polls. There are polls that survey what we think of the war in Iraq, Mitt Romney’s Mormonism, the housing market, abortion, and cigarette smoking—just to name a few examples.

If some pollster calls the average person and asks, “Do you think the economy doing well?” Most people only look at their own personal circumstances when answering a question like that, and, certainly, don’t consider larger questions such as those of economic theory or the global economy. How valuable is the data for national economic decision making? Yet, this is the kind of polling data that is front page news, and drives political policy making.

What if Lincoln would have been subject to the tyranny of opinion polls? Clearly, Lincoln made mistakes as he conducted the war against the Confederacy, but he did not let these mistakes sway his principle convictions. It was these principles that allowed him to continue forward even though the United States during the early part of the war was beset by one setback after another. Cleary, if Lincoln presidency would have been subject to public opinion polls during the early part of the Civil War much of the results would have been negative, but it is obviously the case that much of the public held wrong beliefs about slavery and the handling of the war.

It was his belief about the humanity of all of the races, and the belief that slavery was evil that drove Lincoln’s decision making throughout the Civil War. It was because Lincoln held this as a core belief that he was able to make some very hard decisions during his presidency. John Hay, Lincoln’s personal secretary, wrote this in his personal diary about Lincoln’s personal toughness when he was under strong political pressure, “He will not be bullied even by his friends.” This is because Lincoln knew what is right, and understood appeals to other positions as vacuous.

We need leadership that is driven by principles that are grounded in a transcendent understanding of ideas like truth, justice and honor. It is these foundational principles which are found in natural law and the Bible that enable us to choose the good over the expedient. Until we return to theses sources of the good we are going to be floundering in a sea of poll-driven relativism, and drifting towards our own destruction. It is Lincoln’s steadfast and principled beliefs that rescued us from the tyranny of slavery, and we should see him as a model, not just for politicians, but for us all.