Easter is not a day, it is a season. Thus, instead of remembering our celebration of Easter a few weeks ago as we polish off the last remaining ear of the chocolate bunny or choke down that final Peep, we need to be continually living in the Easter moment. The Lord is risen, alleluia! 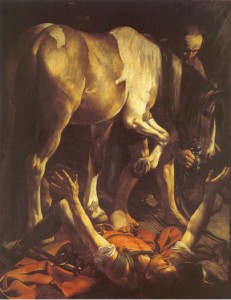 In the Bible there are three rather poignant moments where the resurrected Son of God appears to his followers: Acts 9:1-19a, John 21:1-14 and Revelation 5:6-14. Acts 9 records the conversion of Saul, the Jewish persecutor of the Way. The details are familiar: Saul gets permission from the high priest to travel to Damascus to persecute the Christians there; on the road he is blinded by a vision of the resurrected Son; while undergoing convalescence in the house of a man named Judas, he is visited by Ananias (who has been sent by God) to inform him that the purpose of this vision was to effect his conversion to the Christian faith; his sight is restored and Saul believes. Perhaps nothing captures this event more powerfully than Caravaggio’s (d. 1610) Conversion on the Way to Damascus, hanging in the Cerasi Chapel of the church of Santa Maria del Popolo in Rome.

What is particularly relevant in this passage is that when Saul asks, “Who are you, Lord?,” the Son of God answers, “I am Jesus.” In this moment the second person of the Trinity chooses to reveal himself to Saul as Jesus. He uses his human name, if you will. In essence Jesus is saying to Saul, “I am the carpenter from Galilee.” Given that this event comes with a spectacular light show and a voice from heaven, Saul must have been rather confused during his time recovering at Judas’ house: “How can that simple Galilean have talked to me and caused my blindness when he is dead?” But all the “hows” and “whys” aside, Saul’s conversion is a Jesus moment. In conversion we meet Jesus, the divine-human Son of God whose death on the cross, resurrection and ascension back to the Father’s right hand effects our salvation. Without Jesus, there is no salvation for Saul or for us. 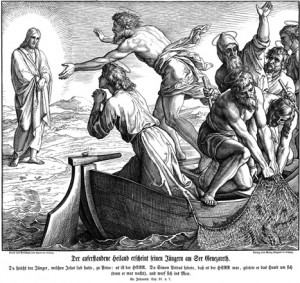 In the Gospel of John, the beloved disciple chooses to share with us a post-resurrection appearance of Jesus to seven of his disciples, including John himself. After fishing all night but to no avail, the disciples are approached by Jesus, who suggests that they “cast the net on the right side of the boat.” The seven fishermen heed this advice and haul in a great quantity of fish; 153 “large fish,” to be exact. As a result of this miraculous catch, John leans over to Peter and says, “It is the Lord!” Peter gets so excited that he jumps into the water and swims to the shore. Julius Schnorr von Carolsfeld’s (d. 1872) woodcut from the Die Bibel in Bildern captures the mood well.

What is important here, I believe, is John’s confession that it is “the Lord” who is responsible for this miracle. John does not say that it is Jesus, but rather the Lord. John wants us to see, I think, that the resurrected Jesus of Nazareth is also the Lord of the universe, for who else could miraculously fill a fishing net with so many large fish? The resurrected Jesus is resuming his place as the Lord of the universe, the Creator and Sustainer of all that is. 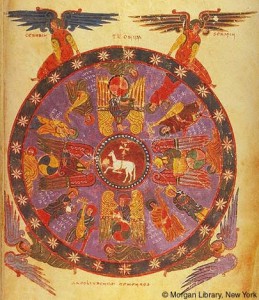 Finally, in the book of Revelation, John the beloved disciple, in the Spirit on the Lord’s day, sees the glorified and exalted Son of God. The Son of God is he who was “slain, and by [his] blood [he] ransomed people for God from every tribe and language and people and nation,” making them “a kingdom and priests to our God” (5:9-10). Significantly, John tells us that when he sees the glorified Son he sees him as a “Lamb standing, as though it had been slain.” And the Lamb is, “Worthy … to receive power and wealth and wisdom and might and honor and glory and blessing!” In this post-resurrection appearance the Son of God appears as the Lamb – he who died for the sins of all and he who is worthy of all praise. Thus, not only is the Son of God Jesus and the Lord but he is also the Lamb. Though difficult to imagine, Beatus of Liébana (d. 800) gives it a try.

So what is significant about each of these events? First, they communicate to us that the Son of God is both Jesus, Lord and the Lamb. Second, given that each is a post-resurrection appearance of the Son of God, they reveal three different aspects of the resurrected Christ: Jesus who saves, the Lord of the universe and the Lamb worthy of all worship. Third, I believe the texts demand that we reflect on these names and ministries of the Son of God. In light of this, may we ask ourselves during this Easter season the following: Do I know the Jesus who saves? Have I surrendered and submitted myself to the Lordship of Christ? Am I worthily worshipping the Lamb? What a great way to continue living in the Easter season, seeking and seeing Jesus the Lord who was slain for us!