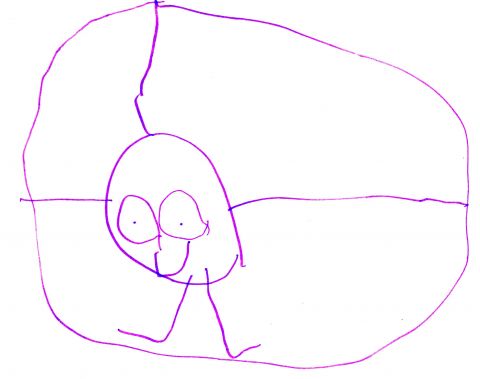 Phoebe Age Four produced this drawing and testified that it is a picture of Snow White. Trying to throw her arms around the world, Snow White has an expression on her face which is open to interpretation. Is she as happy as she wants us to believe? Why is her smile unsettled? Her head and eyes are composed of circles which begin at the lower right and then travel clockwise from five o’clock back to five o’clock twelve hours later. But she is herself inscribed within a circle which takes its beginning point and finds its ending point at twelve o’clock. With a short right arm and a long left arm she grips this circle, and a single hair rises from her head to intersect it at a third point. The perfect balance of the image is completed by the two legs which almost, a l m o s t strike the bottom of the circle. A strict reading of the image therefore dictates that Snow White is hanging from the top of the loop rather than standing on the bottom of it. And that, perhaps, is why her smile seems forced.