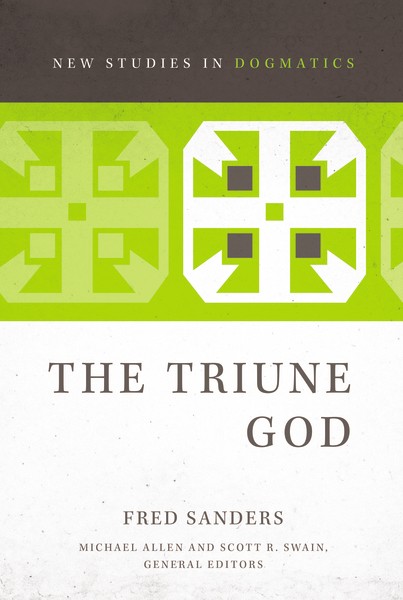 My book The Triune God (part of Zondervan’s New Studies in Dogmatics) is available for pre-order now and will officially be released in December. In this book, without claiming to be more biblical than thou, I do try to articulate the doctrine of the Trinity with a special sort of attentiveness to the mode of its revelation.

What I mean is, instead of gathering up from various parts of the Bible the bits of information which combine to make the doctrine of the Trinity, I take my bearings from the way the one God of Israel made his eternal identity as Father, Son, and Holy Spirit known to his people. It’s an exercise in slow thinking, but also a commitment to treat the manner of revelation as a datum no less fundamental than the matter of revelation. The resulting exposition is not revolutionary. If anything, it’s a bit counter-revolutionary, setting aside much of what is distinctively modern in Trinitarianism, and preferring the broad outlines of an older, more classical Trinitarianism.

In working this out to my own satisfaction over the last few years, I’ve become comfortable with a theological method that I’d like to extend to some more doctrines in upcoming work. If I sound tentative about that, it’s because I’m tentative about that. I wasn’t trying to develop a new method, and am a bit surprised to find myself in possession of one. I considered giving it a big, fancy label like “the canonical-genetic method,” and then fighting people who disagreed with it; maybe found a school, write some surrejoinders, who knows. But it would be humiliating to launch a Programmatic Manifesto for a Movement and then realize there’s not quite as much to it as I thought there was. (People do this in public sometimes and I’m always so embarrassed for them.) So I opted to de-escalate, consider it more a cluster of techniques and an associated set of hunches than a full-blown method, and just see if it continued to be fruitful as I had the chance to apply it to various doctrines. Short of writing a manifesto, I wanted to state the method clearly enough to make it portable, and I certainly won’t be disappointed if I’m just naming something that patristic and scholastic theologians have already been up to all along.

Here’s the hypothesis. Perhaps in systematic theology, every doctrine should be developed with explicit attention to what is communicated by the mode and sequence of its revelation in salvation history and in scripture.

I distinguish salvation history on the one hand and scripture on the other because their relationship is complex. They certainly track each other, as God does things and makes those things known. But they don’t follow the same sequence, cadence, or pace in a way that could have been predicted in advance. Consider the case of predictive prophecy, in which the enscripturated revelation of the thing comes before the event; and compare that with one of the mighty acts of God to which God subsequently attaches the definitive interpretation. Distinguishing salvation history from scripture makes sense if biblical revelation is a fundamentally a matter of show-and-tell: sometimes it’s show-then-wait-then-tell, sometimes it’s tell-and-show, sometimes the show and the tell are not distinguishable in practice.

I became attentive to this while pondering the doctrine of the Trinity. The results are in the book, but the difference it makes for the doctrine itself is that our statements about the internal, eternal triunity of God are dictated by the very gospelly event of the Father sending the Son and the Holy Spirit in the fullness of time. And while God was Trinity before those missions disclosed it, it nevertheless matters a lot that the revelation of that triunity was bundled with the personal advent of the Son and the Holy Spirit. (Like I said, details sold separately.)

Try It On The Angels

But the (relatively) minor doctrine of angelology might illustrate the potential of attending to the mode and sequence of its revelation. Here is a subject introduced so obliquely, with bits of data scattered so copiously, and entangled so thoroughly with other doctrines, that theologians of very different temperaments have noticed something unusual is going on. Augustine was quite vexed that Genesis, which seems to be giving an account of where everything came from, failed to report the angels’ creation. When the first angelic being shows up in chapter 3 holding a flaming sword, the reader is apparently supposed to know all about it (and also about lightsabers perhaps). Aware that this sequence of instruction had some significance, Augustine fiddled perpetually with what it might mean. What sort of background status do angels have in creation, that they can go unmentioned until they are suddenly called in to make a flaming point? Should we find the creation of the angelic host alluded to in the command, “Let there be light?” Is there a reason their origin is concealed from us? Is it concealed from them?

Barth criticized Aquinas (and of course Pseudo-Dionysius behind him) for giving angels an independent and parallel treatment that was neither keyed to their interactions with humans nor, apparently, cognizant that they “are among the countless creatures whose existence and nature we must assume according to the data of Scripture, but whom the Word of God does not require us to consider independently.” Pannenberg kneads them into the background of his cosmology in a way that seems by turns Dantean (the angelic hosts dwell in rings of glory not locatable in our cosmic sphere, yet mappable to them) and demythologizing.

Or consider this: It is a New Testament doctrine that the Old Covenant law was delivered through angels (three witnesses: Gal 3:19, Heb 2:2, Acts 7:53). But this was not clear in the Old Testament; I would say it is not an Old Testament doctrine. Anyone reflecting theologically on this phenomenon should mainly focus on what it tells us about the gospel (note that Paul, Hebrews, and Stephen are all operating in the mode of contrasting old and new, or provisional and final). But it also has implications for angelology, as exegetes, biblical theologians, and systematic theologians have all noted. Canonical-genetically, we could say the right questions to ask are: why was the angelic mediation of the law unclarified until the coming of the gospel? What does it tell us about angels that we who hear the gospel must be re-instructed about their status and role?

This outline of some issues in angelology is only meant to illustrate the potential fruitfulness of taking the manner of revelation as a clue to the content of a doctrine, or (what I haven’t said much about) to the place a doctrine ought to be located in a systematic overview. We’re not just rehearsing a fight about synchronic vs. diachronic treatments, or negotiating the boundary between biblical theology and systematic theology, if we ask where a theologian ought to teach the (NT) doctrine of the angelic  mediation of the Old Covenant law.

And other doctrines, more central than angelology, await similar spadework. Think of how Christology and pneumatology are differently developed in Scripture itself: We have Christ’s names and titles long before he arrives to take them up, but “Holy Spirit” occurs with shocking infrequency in the entire Old Testament before it manages to settle in as a name in the New. Consider the doctrine of God the Father as it splays across the testamental divide. Consider how the doctrine of creation is sharpened in the later Old Testament and the intertestamental period, and then radicalized in the New Testament and the early doctrinal tradition by the need to distinguish the Son’s relation to the Father from the world’s relation to the Father. If each of these doctrines (Son, Spirit, Father) is understood in terms of the manner of their progressive revelation, both within each Testament and across them, I think it would be evident why they have to be considered one comprehensive doctrine brought forward under three aspects, or (pardon me for saying so) in three persons.

Consider the sprawling doctrine of atonement. Perhaps the biggest doctrines are the ones most subject to this kind of canonical-genetic treatment. Perhaps Trinity and atonement form a central pair of mega-doctrines that provide a canonical framework within which numerous lesser doctrines can be situated.

This method presupposes that Scripture is perfect. That is, it approaches the Bible with the expectation that God has made things known precisely as he wanted to, and that our task is to read and understand what is there, in the appropriate sequence and relation. It also presupposes a very strong sense of canonical unity, not because it wants permission to pick here a verse and there a verse, but for the opposite reason: it wants to know why everything is where it is.

This method can function alongside historical-critical insights, but I think it introduces some new considerations and sharpens sold old concerns. Critical reconstructions of a book’s authorship, date, and order are not secondary matters here, but would substantively affect doctrinal decisions. One example off the top of my head: a widespread critical view locates creation theology as a later development than salvation theology. That is, the God of the Exodus only later gets identified as the God of early Genesis (or refine that to the appropriate level of documentary hypothesis you consider demonstrable). Gerhard von Rad and Wolfhart Pannenberg drew a range of doctrinal conclusions from this; it might entail that theological claims about creation are demoted to the status of implications from salvation. They were both comfortable with the implication that the order of the Pentateuch invited readers to draw a very different conclusion. All I will say here is that different critical conclusions (which ought to be weighed on their own merits when possible) will lead to different doctrinal decisions. Uberlieferungsgeschichte and Redaktionstendenz can slug it out here as elsewhere; systematic theologians ought to be paying attention to the best of their abilities.

So there you have it; a brief sketch of a way to handle the doctrines of systematic theology. Perhaps it’s what Vos and Bavinck have been up to all along, and perhaps it’s so screamingly obvious to certain large-minded biblical studies scholars that they don’t bother saying it. But if that’s the case, they ought to bother saying it. I’m going to.